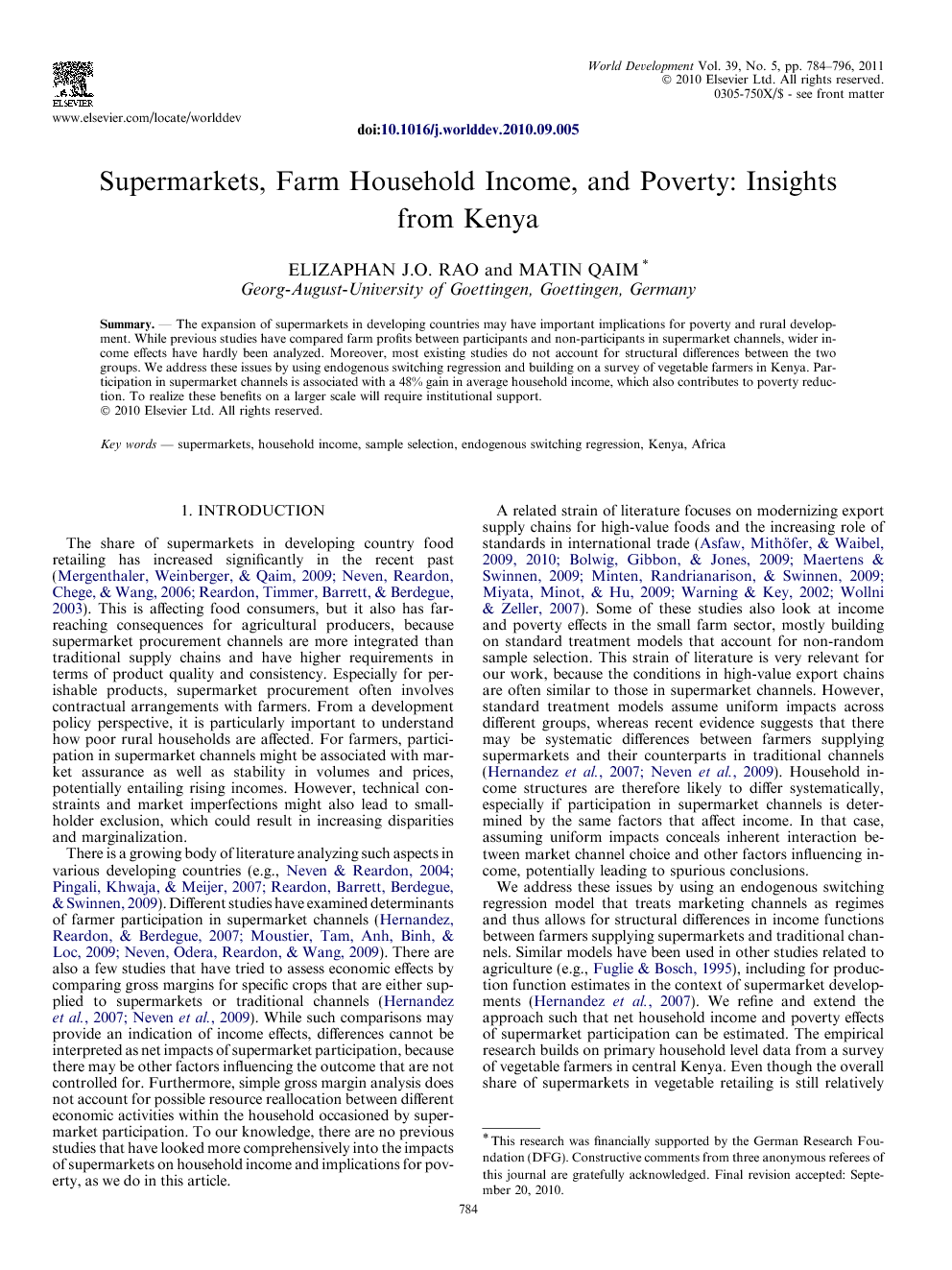 The expansion of supermarkets in developing countries may have important implications for poverty and rural development. While previous studies have compared farm profits between participants and non-participants in supermarket channels, wider income effects have hardly been analyzed. Moreover, most existing studies do not account for structural differences between the two groups. We address these issues by using endogenous switching regression and building on a survey of vegetable farmers in Kenya. Participation in supermarket channels is associated with a 48% gain in average household income, which also contributes to poverty reduction. To realize these benefits on a larger scale will require institutional support.

The share of supermarkets in developing country food retailing has increased significantly in the recent past (Mergenthaler et al., 2009, Neven et al., 2006 and Reardon et al., 2003). This is affecting food consumers, but it also has far-reaching consequences for agricultural producers, because supermarket procurement channels are more integrated than traditional supply chains and have higher requirements in terms of product quality and consistency. Especially for perishable products, supermarket procurement often involves contractual arrangements with farmers. From a development policy perspective, it is particularly important to understand how poor rural households are affected. For farmers, participation in supermarket channels might be associated with market assurance as well as stability in volumes and prices, potentially entailing rising incomes. However, technical constraints and market imperfections might also lead to smallholder exclusion, which could result in increasing disparities and marginalization. There is a growing body of literature analyzing such aspects in various developing countries (e.g., Neven and Reardon, 2004, Pingali et al., 2007 and Reardon et al., 2009). Different studies have examined determinants of farmer participation in supermarket channels (Hernandez et al., 2007, Moustier et al., 2009 and Neven et al., 2009). There are also a few studies that have tried to assess economic effects by comparing gross margins for specific crops that are either supplied to supermarkets or traditional channels (Hernandez et al., 2007 and Neven et al., 2009). While such comparisons may provide an indication of income effects, differences cannot be interpreted as net impacts of supermarket participation, because there may be other factors influencing the outcome that are not controlled for. Furthermore, simple gross margin analysis does not account for possible resource reallocation between different economic activities within the household occasioned by supermarket participation. To our knowledge, there are no previous studies that have looked more comprehensively into the impacts of supermarkets on household income and implications for poverty, as we do in this article. A related strain of literature focuses on modernizing export supply chains for high-value foods and the increasing role of standards in international trade (Asfaw et al., 2009, Asfaw et al., 2010, Bolwig et al., 2009, Maertens and Swinnen, 2009, Minten et al., 2009, Miyata et al., 2009, Warning and Key, 2002 and Wollni and Zeller, 2007). Some of these studies also look at income and poverty effects in the small farm sector, mostly building on standard treatment models that account for non-random sample selection. This strain of literature is very relevant for our work, because the conditions in high-value export chains are often similar to those in supermarket channels. However, standard treatment models assume uniform impacts across different groups, whereas recent evidence suggests that there may be systematic differences between farmers supplying supermarkets and their counterparts in traditional channels (Hernandez et al., 2007 and Neven et al., 2009). Household income structures are therefore likely to differ systematically, especially if participation in supermarket channels is determined by the same factors that affect income. In that case, assuming uniform impacts conceals inherent interaction between market channel choice and other factors influencing income, potentially leading to spurious conclusions. We address these issues by using an endogenous switching regression model that treats marketing channels as regimes and thus allows for structural differences in income functions between farmers supplying supermarkets and traditional channels. Similar models have been used in other studies related to agriculture (e.g., Fuglie & Bosch, 1995), including for production function estimates in the context of supermarket developments (Hernandez et al., 2007). We refine and extend the approach such that net household income and poverty effects of supermarket participation can be estimated. The empirical research builds on primary household level data from a survey of vegetable farmers in central Kenya. Even though the overall share of supermarkets in vegetable retailing is still relatively small in Kenya, it is increasing rapidly (Neven & Reardon, 2004). Similar trends are also observed in other countries of Africa. Since many African smallholders are involved in horticultural production, there may be important effects for rural welfare and poverty. The article proceeds as follows. In the next section, we present the analytical framework and estimation procedure. In Section 3, we describe the data and undertake some descriptive analyzes, while in Section 4 we present and discuss the estimation results. Section 5 concludes.

The expansion of supermarkets in developing countries and the establishment of more integrated procurement systems provide new opportunities for farmers to commercialize and participate in modern high-value supply chains. This offers potentials for income increases in rural areas. Yet there is still uncertainty related to the question whether smallholder farmers can benefit, too. While recent studies have analyzed some of the implications in various settings, there is hardly any work that has looked at the impact of supermarkets on household income and poverty. In this article, we have addressed this research gap by analyzing the situation of vegetable farmers in central Kenya. Building on recent farm household survey data, we have developed and used an endogenous switching regression model, which explains household income, taking account of sample selection and structural differences between participants and non-participants in supermarket channels. The estimation results show that participation in supermarket channels produces gains in per capita household income in a magnitude of 48%. Smaller and poorer farms supplying supermarkets even benefit over-proportionally. Simulations demonstrate that poverty rates among supermarket suppliers are 20% lower than they would be were there no supermarkets. These results are in line with studies that have analyzed income and poverty effects of high-value exports in the vegetable sector of Kenya and other countries in Africa (e.g., Maertens and Swinnen, 2009 and McCulloch and Ota, 2002). Our findings therefore suggest that increasing domestic demand for high-value products can expand the income effects that have so far been restricted to high-value exports. It should be stressed, however, that the income effects analyzed here are average treatment effects on the treated, that is, we have looked at the gains that accrue to those households that directly participate in supermarket channels. We have not analyzed potential spillovers to households that do not or cannot supply vegetables to supermarkets. Such spillovers can be negative or positive. Negative effects would occur when smallholder farmers in traditional channels were driven out of the market through the expansion of supermarkets that would procure primarily from larger commercial producers. This might potentially also lead to further land concentration. On the other hand, supermarket developments may entail broader technological and institutional innovation such that farmers in traditional channels could benefit as well, even when they do not supply supermarkets themselves (Schipmann & Qaim, 2010). Furthermore, there may be positive employment effects through commercial farms and processing enterprises in high-value markets hiring in additional labor (Neven et al., 2009). This was also shown in the vegetable export sector (Humphrey et al., 2004, Maertens and Swinnen, 2009 and McCulloch and Ota, 2002). Capturing such broader rural development effects is beyond the scope of this article, but remains an important topic for further research. Policy support can help to guide developments and avoid undesirable social outcomes. Disadvantaged households often face constraints in supplying vegetables to supermarkets. Our analysis has shown that better educated farmers and households with more assets are more likely to be involved in supermarket channels. Moreover, infrastructure and access to transportation are factors that facilitate participation significantly. The positive role of off-farm employment suggests that there may also be credit constraints. Such bottlenecks should be reduced through appropriate institutional innovation. In the study region in central Kenya, there is an NGO that promotes collective action among farmers, provides training on production techniques and special supermarket requirements, and offers other institutional support. These targeted activities reduce transaction costs and contribute to making smallholder farmers more reliable trading partners for supermarkets. The estimation results confirm that farmers who obtain this NGO support are much more likely to participate in supermarket channels. Hence, such efforts should be scaled up to reach a larger number of farmers and achieve larger geographical coverage. This may involve both new incentives for private activities or also public interventions. In some cases, public–private partnerships have also proven successful in terms of better linking farmers to high-value markets (Kaganzi et al., 2009 and Narrod et al., 2009). For instance, the public sector may provide the physical infrastructure that supports extension and market linkage services offered by private agents. Kenya is only one example in Africa where supermarkets are gradually transforming agricultural supply chains. Therefore, this research has wider implications. Understanding both the potentials and risks of emerging value chains is crucial, as developments gradually spread to a wider geographical area. Our results suggest that supermarkets can contribute to income growth and poverty reduction in the small farm sector. Yet to realize this potential on a larger scale will necessitate broader infrastructure development as well as targeted institutional support.