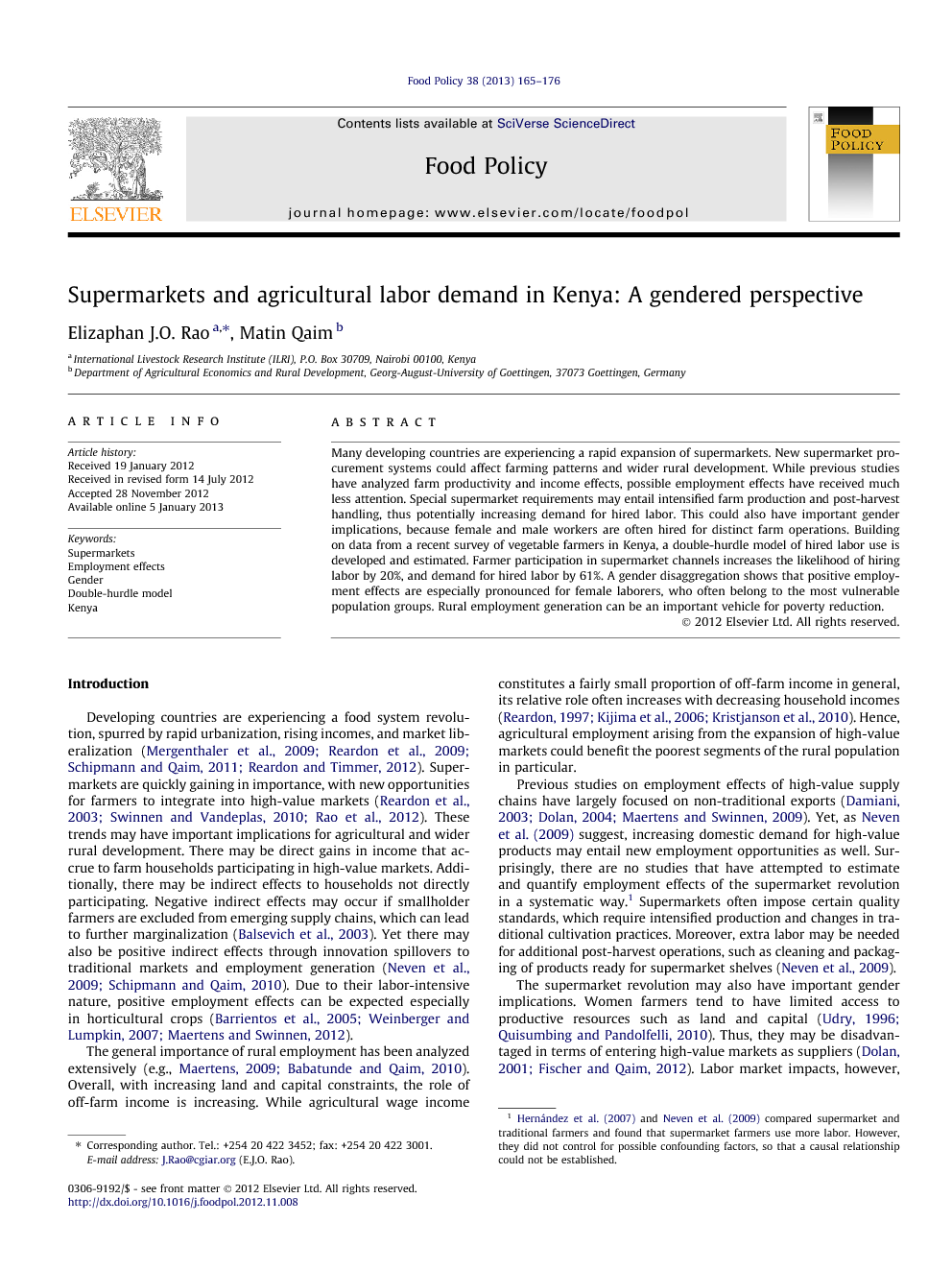 Many developing countries are experiencing a rapid expansion of supermarkets. New supermarket procurement systems could affect farming patterns and wider rural development. While previous studies have analyzed farm productivity and income effects, possible employment effects have received much less attention. Special supermarket requirements may entail intensified farm production and post-harvest handling, thus potentially increasing demand for hired labor. This could also have important gender implications, because female and male workers are often hired for distinct farm operations. Building on data from a recent survey of vegetable farmers in Kenya, a double-hurdle model of hired labor use is developed and estimated. Farmer participation in supermarket channels increases the likelihood of hiring labor by 20%, and demand for hired labor by 61%. A gender disaggregation shows that positive employment effects are especially pronounced for female laborers, who often belong to the most vulnerable population groups. Rural employment generation can be an important vehicle for poverty reduction.

Developing countries are experiencing a food system revolution, spurred by rapid urbanization, rising incomes, and market liberalization (Mergenthaler et al., 2009, Reardon et al., 2009, Schipmann and Qaim, 2011 and Reardon and Timmer, 2012). Supermarkets are quickly gaining in importance, with new opportunities for farmers to integrate into high-value markets (Reardon et al., 2003, Swinnen and Vandeplas, 2010 and Rao et al., 2012). These trends may have important implications for agricultural and wider rural development. There may be direct gains in income that accrue to farm households participating in high-value markets. Additionally, there may be indirect effects to households not directly participating. Negative indirect effects may occur if smallholder farmers are excluded from emerging supply chains, which can lead to further marginalization (Balsevich et al., 2003). Yet there may also be positive indirect effects through innovation spillovers to traditional markets and employment generation (Neven et al., 2009 and Schipmann and Qaim, 2010). Due to their labor-intensive nature, positive employment effects can be expected especially in horticultural crops (Barrientos et al., 2005, Weinberger and Lumpkin, 2007 and Maertens and Swinnen, 2012). The general importance of rural employment has been analyzed extensively (e.g., Maertens, 2009 and Babatunde and Qaim, 2010). Overall, with increasing land and capital constraints, the role of off-farm income is increasing. While agricultural wage income constitutes a fairly small proportion of off-farm income in general, its relative role often increases with decreasing household incomes (Reardon, 1997, Kijima et al., 2006 and Kristjanson et al., 2010). Hence, agricultural employment arising from the expansion of high-value markets could benefit the poorest segments of the rural population in particular. Previous studies on employment effects of high-value supply chains have largely focused on non-traditional exports (Damiani, 2003, Dolan, 2004 and Maertens and Swinnen, 2009). Yet, as Neven et al. (2009) suggest, increasing domestic demand for high-value products may entail new employment opportunities as well. Surprisingly, there are no studies that have attempted to estimate and quantify employment effects of the supermarket revolution in a systematic way.1 Supermarkets often impose certain quality standards, which require intensified production and changes in traditional cultivation practices. Moreover, extra labor may be needed for additional post-harvest operations, such as cleaning and packaging of products ready for supermarket shelves (Neven et al., 2009). The supermarket revolution may also have important gender implications. Women farmers tend to have limited access to productive resources such as land and capital (Udry, 1996 and Quisumbing and Pandolfelli, 2010). Thus, they may be disadvantaged in terms of entering high-value markets as suppliers (Dolan, 2001 and Fischer and Qaim, 2012). Labor market impacts, however, may be more favorable for women. Maertens and Swinnen (2012) reported positive employment effects for female rural laborers in high-value export chains in Senegal. Similar effects may also occur in supermarket channels, when farmers supplying these channels hire more labor for operations where female workers are preferred. Women’s participation in labor markets is often positively associated with women’s well-being and economic independence (Quisumbing, 2003, Zhang et al., 2004 and Quisumbing and McClafferty, 2006). Such gendered effects of the supermarket revolution have never been analyzed. We contribute to the literature by estimating the impact of farmers’ participation in supermarket channels on their demand for hired labor. To analyze gender implications, we differentiate between female and male hired labor. As farmers self-select into supermarket channels, we employ an instrumental variable approach and carry out different robustness checks to test and control for unobserved heterogeneity. We use a double-hurdle model, which accounts for the fact that not all farmers hire labor, and the general decision to hire may be separated from the decision of how much labor to hire. The analysis is based on data from a survey of vegetable farmers in Kenya. The expansion of supermarkets in Sub-Saharan Africa is not yet as strong as in Asia and Latin America, but in Kenya supermarkets already account for about 6% of the national food retail sector, and 20% of food retailing in urban areas (Planet Retail, 2011). While the focus is largely on processed foods, supermarkets are also gaining ground in fresh product markets. Supermarket procurement strategies have started to influence the horticultural sector around Nairobi, and this phenomenon will likely spread to other parts of Kenya when the modern retail sector expands. Similar developments are also expected in other countries of Africa. Hence, a better understanding of rural labor market effects is important from a research and policy perspective.

The supermarket revolution has raised concerns about the implications for the rural poor. Recent research examined determinants of access to supermarket channels, as well as productivity and income effects for participating farm households. Possible employment effects have received much less attention. We have addressed this research gap by analyzing the impact of supermarket participation on farmers’ demand for hired labor, using a survey of vegetable farmers in central Kenya. In addition to analyzing demand for total hired labor, we have studied gender implications by disaggregating between female and male hired labor. Results show that farmer participation in supermarket channels increases the likelihood of hiring labor by 20%, and demand for hired labor by 61%. Hence, the expansion of supermarkets is associated with positive employment effects. Since agricultural wage employment is often more important for the lower income segments, the rural poor may benefit overproportionally. Positive employment effects are especially pronounced for female laborers. Participation in supermarket channels increases farmers’ demand for female hired labor by 121%. This is a welcome finding from a gender equity perspective. Women’s access to paid employment tends to increase their economic independence and control over income (Hoddinott and Quisumbing and McClafferty, 2006). Hence, when assessing rural development effects of the supermarket revolution, it is not enough to focus only on the impacts on farmers that directly participate in supermarket channels. Labor market effects must also be considered. This was also observed for horticultural export chains (Maertens et al., 2012). But horticultural export production is often a niche activity in certain regions of a country, whereas the supermarket expansion may gradually affect farm production more widely. Nonetheless, when the focus is on gender issues, it should be mentioned that the role of women may be weakened in farm households that participate in supermarket channels as suppliers. Due to their limited access to productive resources, women farmers find it more difficult to enter high-value markets themselves (Udry, 1996 and Quisumbing and Pandolfelli, 2010). And with increasing degrees of commercialization, men often take over control of agricultural resources and income (von Braun and Kennedy, 1994 and Fischer and Qaim, 2012). Also within the labor market, more female employment may not always be a sufficient condition for positive welfare effects. In their studies on agricultural export chains, Barrientos et al. (2003) and Dolan (2004) showed that positive employment effects may be undermined by a gender bias in terms of wage discrimination or unfair labor practices. Such aspects were not analyzed here but deserve further scrutiny in follow-up research.