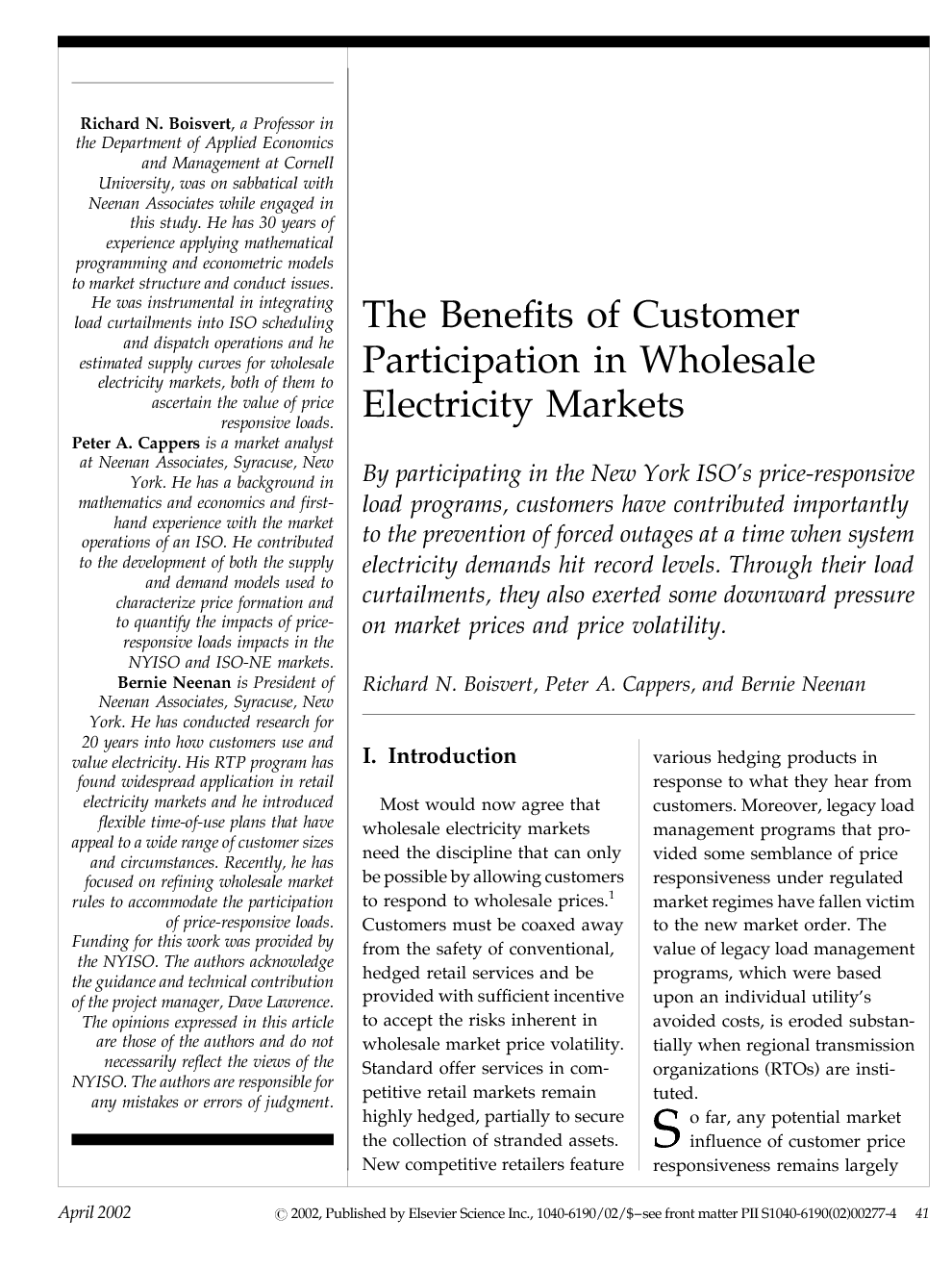 By participating in the New York ISO’s price-responsive load programs, customers have contributed importantly to the prevention of forced outages at a time when system electricity demands hit record levels. Through their load curtailments, they also exerted some downward pressure on market prices and price volatility.

Most would now agree that wholesale electricity markets need the discipline that can only be possible by allowing customers to respond to wholesale prices.1 Customers must be coaxed away from the safety of conventional, hedged retail services and be provided with sufficient incentive to accept the risks inherent in wholesale market price volatility. Standard offer services in competitive retail markets remain highly hedged, partially to secure the collection of stranded assets. New competitive retailers feature various hedging products in response to what they hear from customers. Moreover, legacy load management programs that provided some semblance of price responsiveness under regulated market regimes have fallen victim to the new market order. The value of legacy load management programs, which were based upon an individual utility’s avoided costs, is eroded substantially when regional transmission organizations (RTOs) are instituted. So far, any potential market influence of customer price responsiveness remains largely untapped. Some have prescribed an extreme remedy: make the standard retail offer some variant on real-time pricing, thereby forcing customers to confront wholesale market price volatility head on. While most customers will continue to seek the safe harbor of a hedged price, a small fraction will likely find that they can lower costs by avoiding high prices through effective load management. In the end, customers will assume the degree of risk that fits their circumstances and in the process exert the appropriate influence over market price. While this extreme remedy may eventually bring about this desired result, customers may at first rush to a hedged service to avoid those risks, leaving price volatility unabated. An alternative remedy is to offer customers limited and highly structured opportunities to participate in wholesale markets through price-responsive load (PRL) programs managed by independent system operators (ISOs) and RTOs.2 By scheduling or dispatching PRL resources, the ISO can ensure that these resources are deployed when their value to the market is highest. During the summer 2001, the New York ISO’s (NYISO’s) Market Members elected to implement two pilot PRL programs that are consistent with this alternative view. In what follows, we review these PRL programs briefly, outline the several categories of PRL program benefits, and provide an empirical assessment of the program effects during the summer 2001.