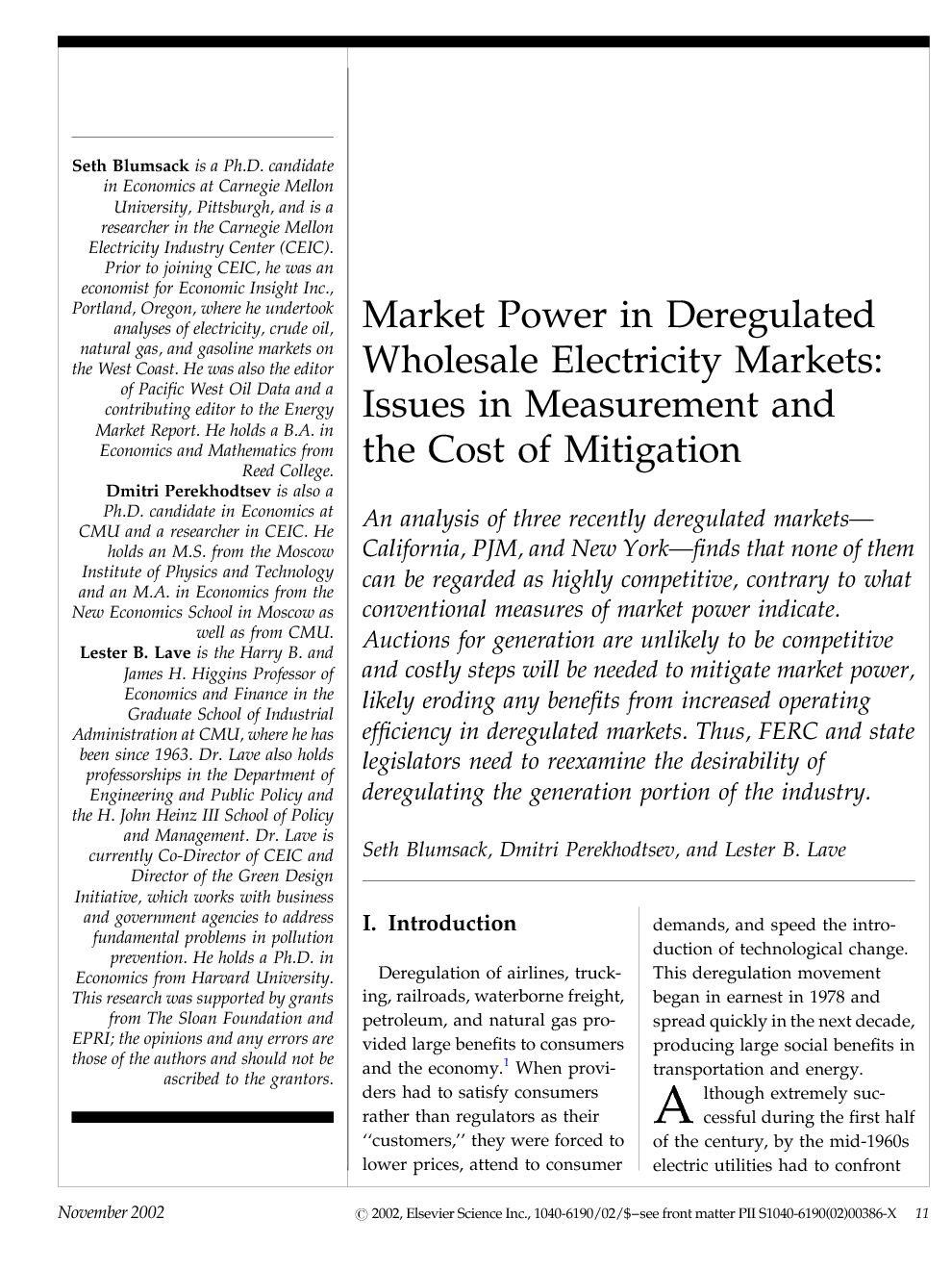 An analysis of three recently deregulated markets—California, PJM, and New York—finds that none of them can be regarded as highly competitive, contrary to what conventional measures of market power indicate. Auctions for generation are unlikely to be competitive and costly steps will be needed to mitigate market power, likely eroding any benefits from increased operating efficiency in deregulated markets. Thus, FERC and state legislators need to reexamine the desirability of deregulating the generation portion of the industry.

Deregulation of airlines, trucking, railroads, waterborne freight, petroleum, and natural gas provided large benefits to consumers and the economy.1 When providers had to satisfy consumers rather than regulators as their “customers,” they were forced to lower prices, attend to consumer demands, and speed the introduction of technological change. This deregulation movement began in earnest in 1978 and spread quickly in the next decade, producing large social benefits in transportation and energy. Although extremely successful during the first half of the century, by the mid-1960s electric utilities had to confront growing technical and business difficulties. In 1965, New York City and much of the East Coast experienced a power blackout. Despite the efforts to fix the system, partly through the formation of the North American Electric Reliability Council (NERC), the problems occurred again in the 1980s. The OPEC oil embargo of 1974 and subsequent price increases plunged the economy into recession, interrupting electricity demand growth and causing utilities to cancel orders for many generation units, including some under construction; the cancellation costs eventually raised consumer electricity bills. Consumer prices rose even more with the large cost overruns in constructing many nuclear plants. By 1990, the electricity industry had high prices, reliability problems, and seemed unable to handle the challenges it faced. The beneficial experience with deregulation in the transportation, oil, and natural gas markets led economists and policymakers to propose restructuring the electricity industry. Beginning with the passage of the 1978 Public Utilities Regulatory Policies Act (PURPA),2,3 less-regulated wholesale electricity markets were given a boost with the 1992 Electricity Policy Act (EPAct), which allowed non-load-serving entities to buy and sell bulk power. California and Pennsylvania competed to be the first states to move towards market-based ratemaking (rather than regulated ratemaking based on a “cost plus” approach). Many other states were not far behind. At first, only large industrial customers were allowed to sign contracts with non-utility generators (NUGs) for “direct access” service, but eventually both California and Pennsylvania allowed residential and commercial customers to select their electric service providers. The experience of the two leading states could not have been more different. After a transition period, in which utilities were allowed to pay off stranded costs, prices in Pennsylvania have fallen and consumers are benefiting.4 Despite some isolated incidents of individual generators attempting to exercise market power, the net benefits to consumers appear to have been positive.5 The first two years of California deregulation paralleled Pennsylvania’s experience before an extended wholesale price escalation. High prices prevailed for nearly a year before the Federal Energy Regulatory Commission (FERC) intervened to impose price caps, investigate generators who appeared to be withholding capacity, and threatened to disallow previous sales prices. By the end of the energy crisis, the State of California and the three California investor-owned utilities (IOUs) were in deficit by more than $30 billion. Several analysts saw California’s energy crisis as a “perfect storm” in which a confluence of forces converged: a long drought that cut the availability of inexpensive hydro power, a gas pipeline explosion that curtailed gas deliveries to turbine generators, and high prices for NOx, emissions allowances. Although a flawed market structure certainly received its share of the blame for California’s power woes, the conventional wisdom maintained that minor modifications to the market structure, together with a respite from the perfect storm, would produce a competitive electricity market that would serve consumers far better than the regulated system. In other words, this conventional view is that deregulation, even in California, is still in the public interest and that FERC should continue to press for deregulation and encourage or even force other states to establish competitive wholesale generation markets. California’s experiment with deregulation has produced a slew of analyses that demonstrate how prices in California have regularly exceeded the “competitive” level, even in times of surplus capacity.6 Recent studies accuse firms of manipulating the electricity and natural gas markets to raise prices. Oversight reviews of the California Power Exchange and Independent System Operator have also used a price-cost margin metric. These analyses demonstrate that market power was exercised in California’s wholesale energy auctions, increasing prices and profits. Non-competitive behavior presumably can occur only within the confines of a non-competitive market structure. Antitrust regulators have used measures of market concentration to assess the competitiveness of market structure; the most popular of these has been the Herfindahl-Hirschman Index (HHI), computed as the sum of the market shares of each firm squared. A purely monopolistic market (one firm with a market share of 100 percent) would have an HHI of 10,000. To assess the competitiveness of market behavior, economists and regulators examine price-cost margins; the Lerner Index, one measure of the price-cost markup quite common in the antitrust literature, is computed as market price minus cost divided by price.7,8 More recently, however, regulators in particular have abandoned the conventional approaches in favor of methods based on comparisons between the generation capacity of individual firms and the surplus of the system as a whole (the “supply margin”). FERC, for example, has begun to use a “pivotal supplier” analysis in reviews of market-based ratemaking, which evaluates the ability of a single generating company to disrupt the grid by withholding supplies from the market. A recent study of the proposed Western regional transmission organization (RTO) used seasonal HHIs to determine the dominance of individual electric utilities in particular service areas.9 Regardless of the actual measure of market power employed, these studies and many others have focused on the performance of individual markets, demonstrating the exercise of market power in some areas at some times. Conversely, the analysis presented here is one of market structure, and in the spirit of the HHI, examines the potential for one firm (or a group of firms) to raise the price of power above the competitive level.