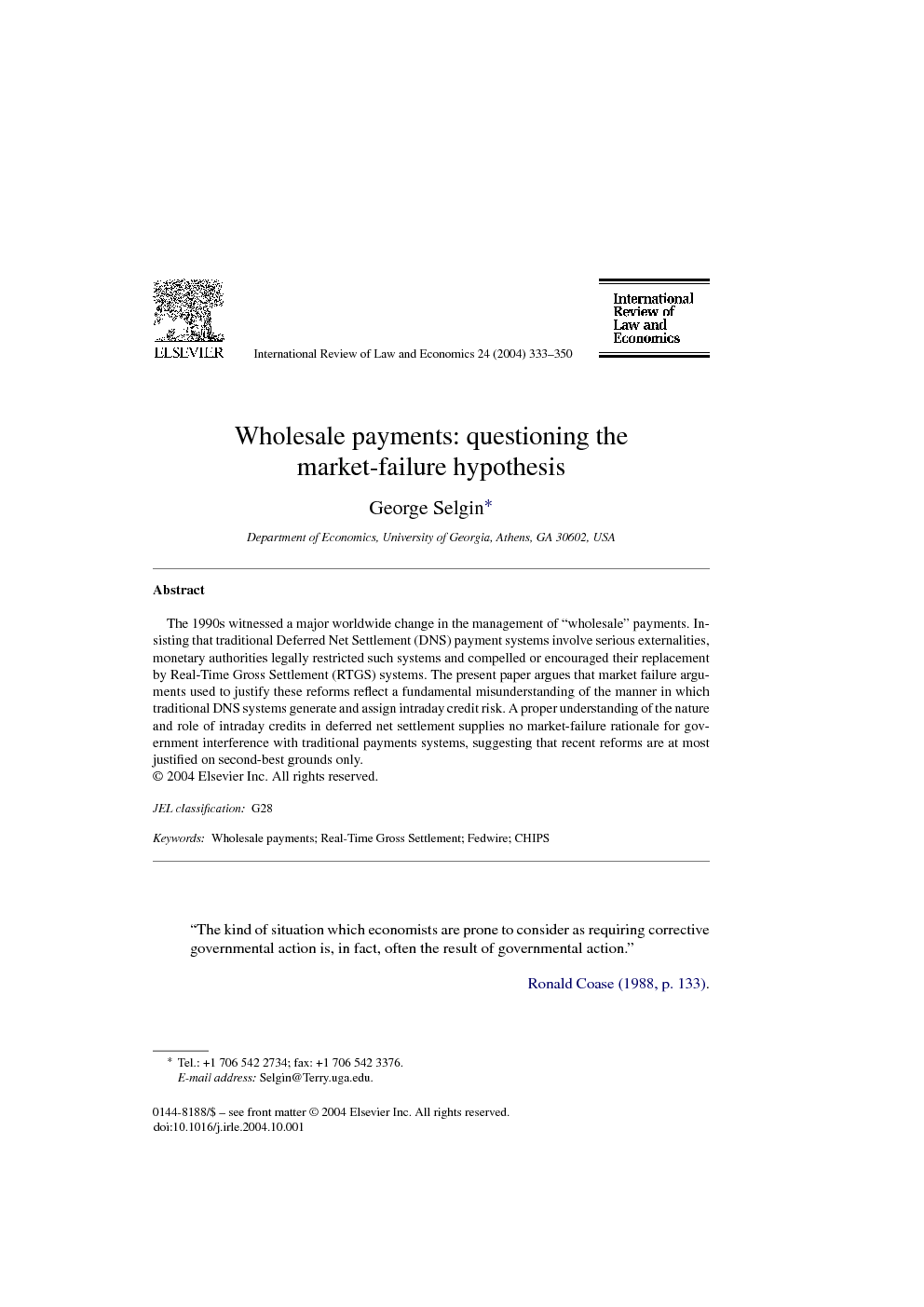 The 1990s witnessed a major worldwide change in the management of “wholesale” payments. Insisting that traditional Deferred Net Settlement (DNS) payment systems involve serious externalities, monetary authorities legally restricted such systems and compelled or encouraged their replacement by Real-Time Gross Settlement (RTGS) systems. The present paper argues that market failure arguments used to justify these reforms reflect a fundamental misunderstanding of the manner in which traditional DNS systems generate and assign intraday credit risk. A proper understanding of the nature and role of intraday credits in deferred net settlement supplies no market-failure rationale for government interference with traditional payments systems, suggesting that recent reforms are at most justified on second-best grounds only.

When a bank, acting on its own behalf or that of a client, needs to transfer a large sum, say $10 million, to another bank, the transfer will almost certainly be made through a “wholesale” payments system. Wholesale payments systems receive payments messages from sending banks, relay them to receiving banks, and oversee the final settlement of interbank accounts. Two basic kinds of wholesale payments systems exist. A Deferred Net Settlement (DNS) system gathers payment orders throughout the business day (or some other preset period), calculates end-of-day multilateral net obligations, and then arranges for the transfer of reserves (“good funds”) from net senders to net recipients of funds. A Real-Time Gross Settlement (RTGS) system executes payment orders as they arrive, at once transferring reserve credits representing the gross value of individual payments. The strictest Real-Time Gross Settlement (RTGS-GF) systems require their members to possess clearing balances or “good funds” sufficient to cover all payments, while less strict versions (RTGS-DO) allow their participants to rely on intraday credits or “daylight overdrafts” to cover payments in excess of their available balances, on the understanding that the credits must be repaid at day's end. An RTGS-DO arrangement combines the continuous settlement feature of RTGS-GF with at least some of the reserve efficiencies found in DNS systems. However, unless intraday credits are provided free of charge, a sequence of wholesale payments administered by either sort of RTGS system will give rise to a greater demand for bank reserves than an identical sequence of payments using DNS. This is one reason why DNS has historically been the preferred means for handling both retail (small value) and wholesale transfers. The 1990s, however, witnessed a remarkable change in wholesale payments arrangements, with traditional DNS arrangements giving way to RTGS systems, and especially to RTGS-DO systems. Government monetary authorities, including the Fed, have actively promoted the change both by recommending or mandating changes in private wholesale payment systems and by competing against private networks with their own RTGS systems. Government promotion of RTGS has typically been defended on the grounds that traditional net settlement systems are beset by serious externalities that could have catastrophic consequences. Here, I critically assess market failure arguments for reforming or abolishing traditional DNS systems, showing that these arguments have been based, not on empirical evidence or on careful consideration of actual DNS procedures, but on a spurious analogy drawn between DNS systems and Fedwire, the Federal Reserve's own RTGS-DO system. While there are good reasons for thinking that Fedwire does indeed harbor a serious externality problem, or at least that it did so prior to reforms initiated in 1994, the frequently made claim that unregulated DNS systems suffered from an analogous but independent externality problem overlooks crucial differences between Fedwire and traditional DNS arrangements, including CHIPS prior to the 1990s, and especially the different ways in which each generates and assigns intraday credit risk. My position is not that traditional DNS arrangements were trouble-free. Nor do I deny that such arrangements may have permitted excessive risk taking. However, I argue that, to the extent that risks were excessive, the cause was not market failure but implicit guarantees extended by regulatory authorities themselves, which tended to corrupt otherwise sound market-based arrangements. My modest aim is to show how the literature on wholesale payments has tended to confuse regulatory failure with market failure, thereby diverting attention from potential first-best solutions to alternatives that may not even qualify as second-best.

The widespread view that unregulated private wholesale payment arrangements, and deferred net settlement in particular, promote excessive risk taking has been based upon regulators’ misunderstanding of (1) the manner in which private DNS arrangements generate and assign intraday credit risk and (2) the role that government guarantees have played in undermining otherwise sound private-market wholesale payments arrangements. Unlike Fedwire, CHIPS and other traditional DNS arrangements do not rely upon underpriced intraday credits, or rely upon them only to the extent that they must participate in an RTGS-DO system to effect final settlements. The only credits that are directly connected to intraday DNS payments are credits granted by receiving banks to their own customers; and these credits shift settlement risks to third parties only in so far as they are backed by extra-market finality guarantees. Recent reforms doing away with DNS systems, or subjecting them to restrictions or loss-sharing provisions that may run counter to what participants would have contracted for, have been inefficient if not counterproductive substitutes for reforms aimed at eliminating uncalled for finality guarantees extended by regulatory authorities. Although it may not be possible to reverse the wave of central bank sponsored reforms aimed at abolishing or at least “securing” DNS systems, it is not too late for economists to strive for greater clarity concerning what such reforms have and have not accomplished. The reforms have succeeded in reducing or eliminating unwind risk in wholesale payments. In some cases, the reforms may have countered inefficiencies stemming from the presence of central bank guarantees or from the failure of courts to enforce private contracts. What the reforms cannot be shown to have achieved is the correction of any genuine market failure.