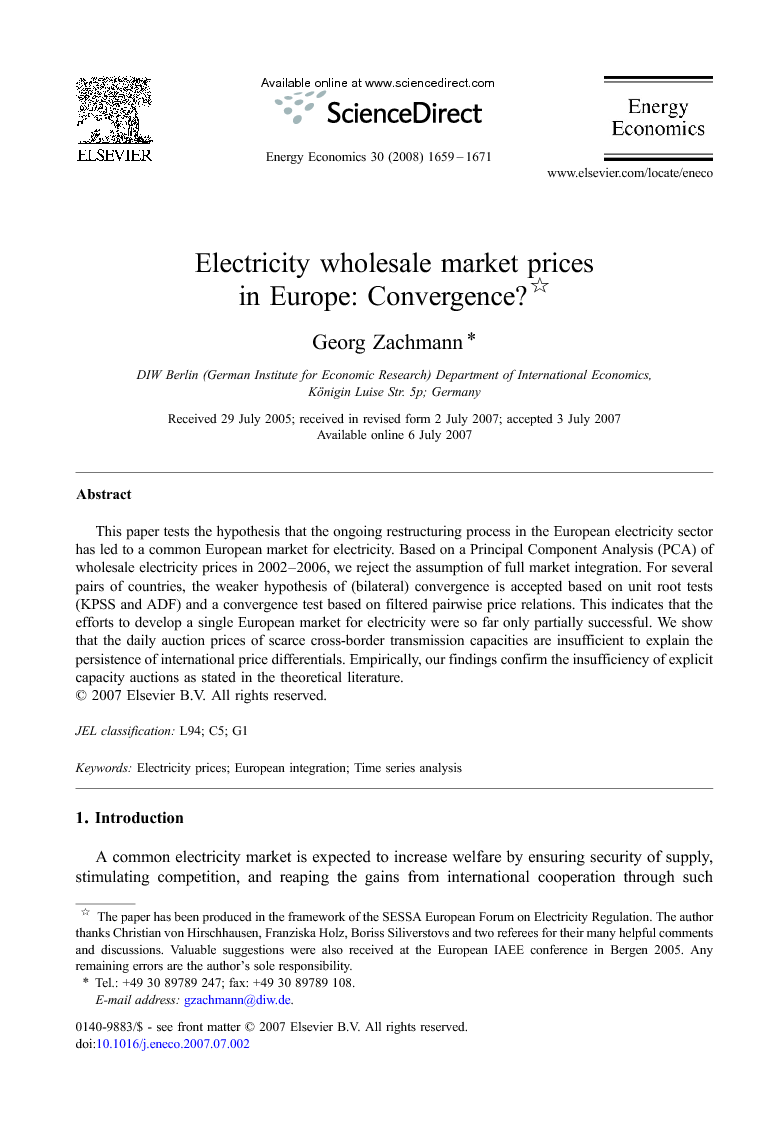 This paper tests the hypothesis that the ongoing restructuring process in the European electricity sector has led to a common European market for electricity. Based on a Principal Component Analysis (PCA) of wholesale electricity prices in 2002–2006, we reject the assumption of full market integration. For several pairs of countries, the weaker hypothesis of (bilateral) convergence is accepted based on unit root tests (KPSS and ADF) and a convergence test based on filtered pairwise price relations. This indicates that the efforts to develop a single European market for electricity were so far only partially successful. We show that the daily auction prices of scarce cross-border transmission capacities are insufficient to explain the persistence of international price differentials. Empirically, our findings confirm the insufficiency of explicit capacity auctions as stated in the theoretical literature.

A common electricity market is expected to increase welfare by ensuring security of supply, stimulating competition, and reaping the gains from international cooperation through such means as reserve sharing, combining different national consumption and production patterns, etc. To create a single European market for electricity the European Union has issued two directives, one regulation and several decisions that oblige both old and new EU member states to undertake substantial reform efforts. The measures require that: markets be opened (e.g. Directive 2003/54/EC); obstacles to cross-border trade be reduced (Regulation 1228/2003); and that non-discriminatory third-party access to the network be guaranteed (e.g. Directive 2003/54/EC). To date, implementation (via the enactment of national laws) among the member states varies. Even a cursory read of the reports benchmarking national electricity sector reforms such as EC, 2005 and EC, 2006, and OXERA (2005) reveals the differences that remain. Although there has been substantial progress by some members, the EU's goal is yet far off. Given these circumstances, several authors have wondered whether market outcomes can confirm the success of the reforms with respect to the EU's common market policy. Bower (2002), Armstrong and Galli (2003), Boisseleau (2004), Armstrong and Galli (2005), and Turvey (2006) compared day-ahead wholesale market prices at several European power exchanges. Bower (2002) applied correlation and cointegration analysis to 2001 prices from the Nordic countries, Germany, Spain, the UK, and the Netherlands. He concluded that some European electricity markets (especially the Nordic countries, the Netherlands, and its neighbors) were already integrated to a certain extent by 2001.1 A relevant chapter in Boisseleau (2004) that focused on regression and correlation analysis determined that the level of integration of European markets is quite low. Both Bower (2002) and Boisseleau (2004) described the respective status quo of European market integration; in contrast, Armstrong and Galli (2005) analyzed the evolution of price differentials between France, Germany, the Netherlands and Spain from 2002 to 2004, concluding that European electricity prices converged in this period.2Turvey (2006) examined the use of interconnectors and the pricing of scarce transmission capacities. Based on the example of the Anglo-French Interconnector, he provided empirical evidence for the insufficient correlation of flows and price differentials. International electricity price convergence3 can be triggered by different factors, like: the convergence of factor prices; the convergence of product prices4; the harmonization of the institutional framework; the convergence of electricity market regulation; the convergence of production technologies and consumption patterns, as well as increasing international electricity trade. While changing investment as well as merger and acquisition behaviour will primarily have long-term impacts, rising international trade will promote market integration in the short- and medium-term. In this paper we will concentrate on the latter. Therefore we test whether European day-ahead electricity wholesale prices converged between 2002 and 2006. Showing that national prices approach over time would indicate that the single market policy was effective in the medium-term, while finding no convergence would imply the (at least initial) shortcoming of those policies. Our paper analyzes the integration of Europe's electricity markets between 2002 and 2006 by studying the development of wholesale prices. We distinguish between the level of market integration – the (static) degree to which the single European market is attained – and price convergence — the (dynamic) measure for the development of prices toward a single European price. Unlike the empirical studies mentioned above, our paper accounts for the effects of congestion and congestion management by including the prices in the daily auctions for the use of scarce transmission capacities (so-called “congestion charges”).5 To capture both market integration and price convergence, our line of argument consists of three steps. First, we demonstrate by means of PCA that no single European electricity market exists so far. Second, using stationarity tests, we show that several price pairs converged bilaterally in 2002–2006. Third, we provide evidence that congestion, as represented by the hourly cross-border capacity auction prices, cannot fully explain the insufficient electricity market integration observed.

This paper provided empirical evidence that a single market for electricity in continental Europe had not been attained by mid-2006. The use of PCA revealed that in June 2004–July 2006, 48% of the peak and 37% of the off-peak price variances were not explained by the first principal component which can be interpreted as a common European price pattern. We showed that national electricity price differences significantly diminished over time for some market pairs. Stationarity tests of wholesale price differentials indicated that price convergence was mainly driven by cross-border market integration. Studying the convergence hypothesis for smoothed hourly price differential series allowed tracing medium-term patterns as well as intra-daily differences. We found that 59% of the studied hourly pairs of national wholesale electricity prices in 2002–2006 converged. This increased market integration was mainly an off-peak phenomenon. While 64% of the converging series were in off-peak, 75% of the diverging series were in peak. We also tested the empirical hypothesis that all remaining international price differences can be explained by cross-border transmission capacity auction prices. Arbitrage freeness is assured if the difference between cross-border price differentials and the associated transmission capacity prices is zero in expectation. We found that more than 93% of the studied market pairs featured significant predictable arbitrage opportunities but that 42% of them were not converging toward arbitrage freeness. These findings show that the electricity market reforms in the last decade that explicitly targeted the creation of a single European market for electricity were only partially successful. We suggest that future research should include identifying the reasons for the inefficiencies of explicit auctions, such as risk premiums for traders and the exercise of market power. We believe, too, that EU policy makers should be made aware of these and other potential obstacles to the gradual realization of a common wholesale market for electricity.