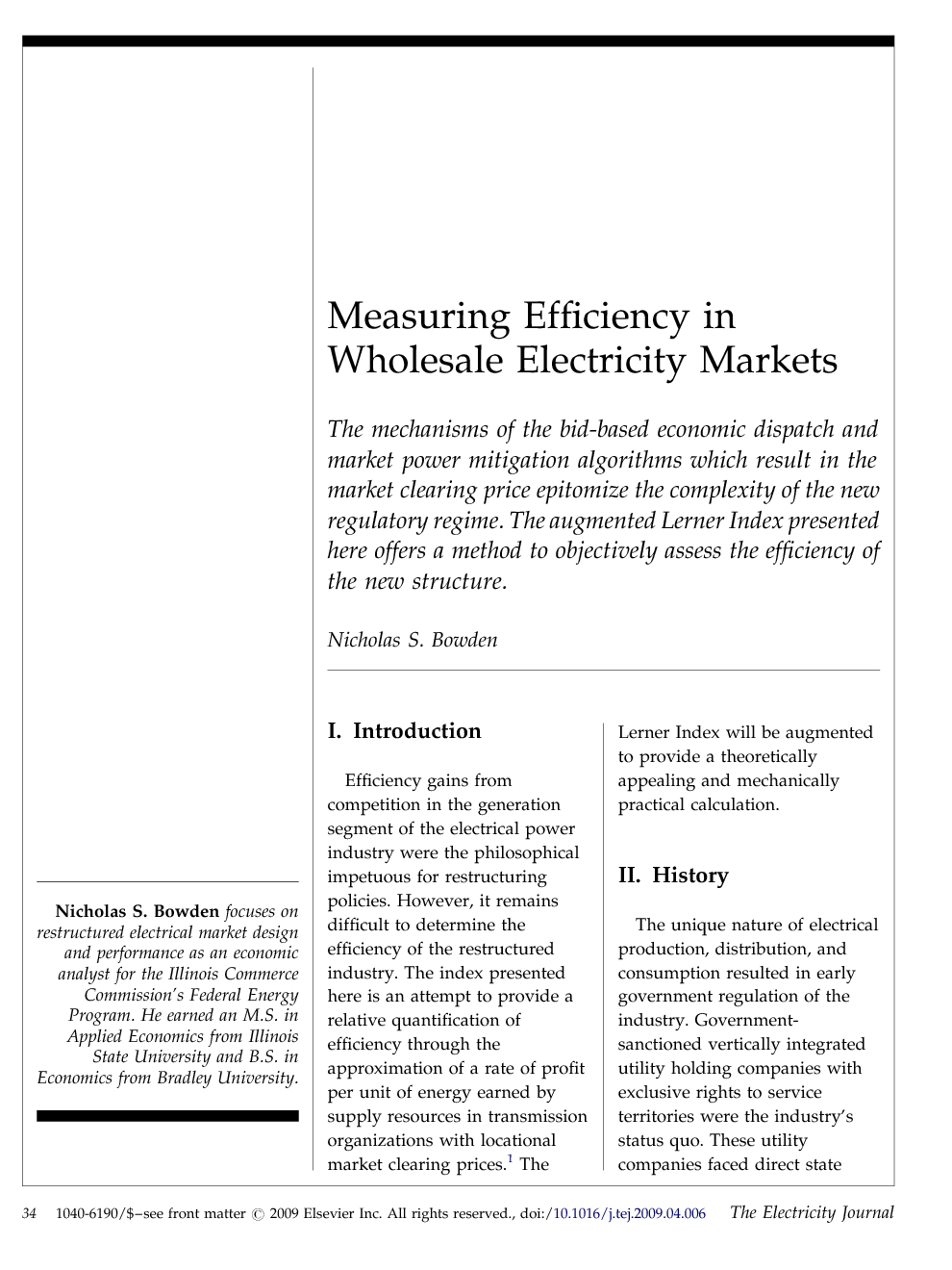 The mechanisms of the bid-based economic dispatch and market power mitigation algorithms which result in the market clearing price epitomize the complexity of the new regulatory regime. The augmented Lerner Index presented here offers a method to objectively assess the efficiency of the new structure.

Efficiency gains from competition in the generation segment of the electrical power industry were the philosophical impetuous for restructuring policies. However, it remains difficult to determine the efficiency of the restructured industry. The index presented here is an attempt to provide a relative quantification of efficiency through the approximation of a rate of profit per unit of energy earned by supply resources in transmission organizations with locational market clearing prices.1 The Lerner Index will be augmented to provide a theoretically appealing and mechanically practical calculation.

The augmented Lerner Index presented here may be characterized as an estimation of the degree of efficiency in energy market performance rather than the degree of monopoly power. The conceptual break with the traditional interpretation is a result of the highly structured condition of the marketplace. While the evolution of wholesale electrical energy markets is steeped in the rhetoric of competition, the truth is a high degree of regulation is still involved. The mechanisms of the bid-based economic dispatch and market power mitigation algorithms which result in the market clearing price epitomize the complexity of the new regulatory regime. Providing methods to objectively assess the efficiency of the new structure is and should continue to be a high priority. The augmented Lerner Index presented here is an attempt to progress in this endeavor. 1 The analysis implicitly assumes that energy transactions are not hedged. While this is not true, hedged prices are not ascertainable, and the goal of the article is the measurement of the efficiency of wholesale market constructs, and not necessarily the direct quantification average supply resource profit rates. 2 The divestiture of the largest early utility companies, appropriation of newly designed service territories, and effectuation of state jurisdiction were propelled by the Public Utilities Holding Company Act of 1935. 3 A comprehensive list of FERC Orders is provided at http://www.ferc.gov/legal/maj-ord-reg.asp. 4 A.P. Lerner, The Concept of Monopoly and the Measurement of Monopoly Power, Rev. Econ. Studies, Vol. 1, No. 3 (1934), at 161. 5 Id., at 168. 6 Id., at 169. 7 A standard neoclassical assumption is that price equals marginal cost in a state of perfect competition. While the assumptions of perfect competition are far from met in the wholesale electrical energy market, the purpose of the assumption is not lost. The states of perfect competition as well as monopoly are most importantly theoretical references for rational inspection of economic realities, and not pictures of them. 8 While generating resources supply the vast majority of energy it is important to recognize the treatment of demand reductions as legitimate supply resources under the new order. 9 Supply offers also include other operating parameters and associated costs in addition to price–quantity supply functions, e.g. economic and emergency minimum and maximum run times, maximum daily starts, startup costs, no-load costs, etc. 10 An exposition of competitive markets and a nontechnical introduction to the bid-based economic-dispatch-constrained optimization problem is offered in a white paper by William Hogan, Competitive Electricity Market Design: A Wholesale Primer, Center for Business and Government, John F. Kennedy School of Government, Harvard University, Cambridge, MA, Dec. 17, 1998. 11 The acceptance of price equal to marginal cost is rational given losses would be greater if such acceptance was forgone, given that some fixed cost exists. Divergence from this behavior is most likely a result of the inability to estimate marginal cost or an exercise of market power. 12 Assuming the supply stack to be a convex function of quantity would imply that the rates of profit not only increase with increases in load, but also that the rates of profit increase at an increasing rate. 13 E.g. The PJM Cost Development Task Force at http://www.pjm.com/committees-and-groups/task-forces/cdtf.aspx.