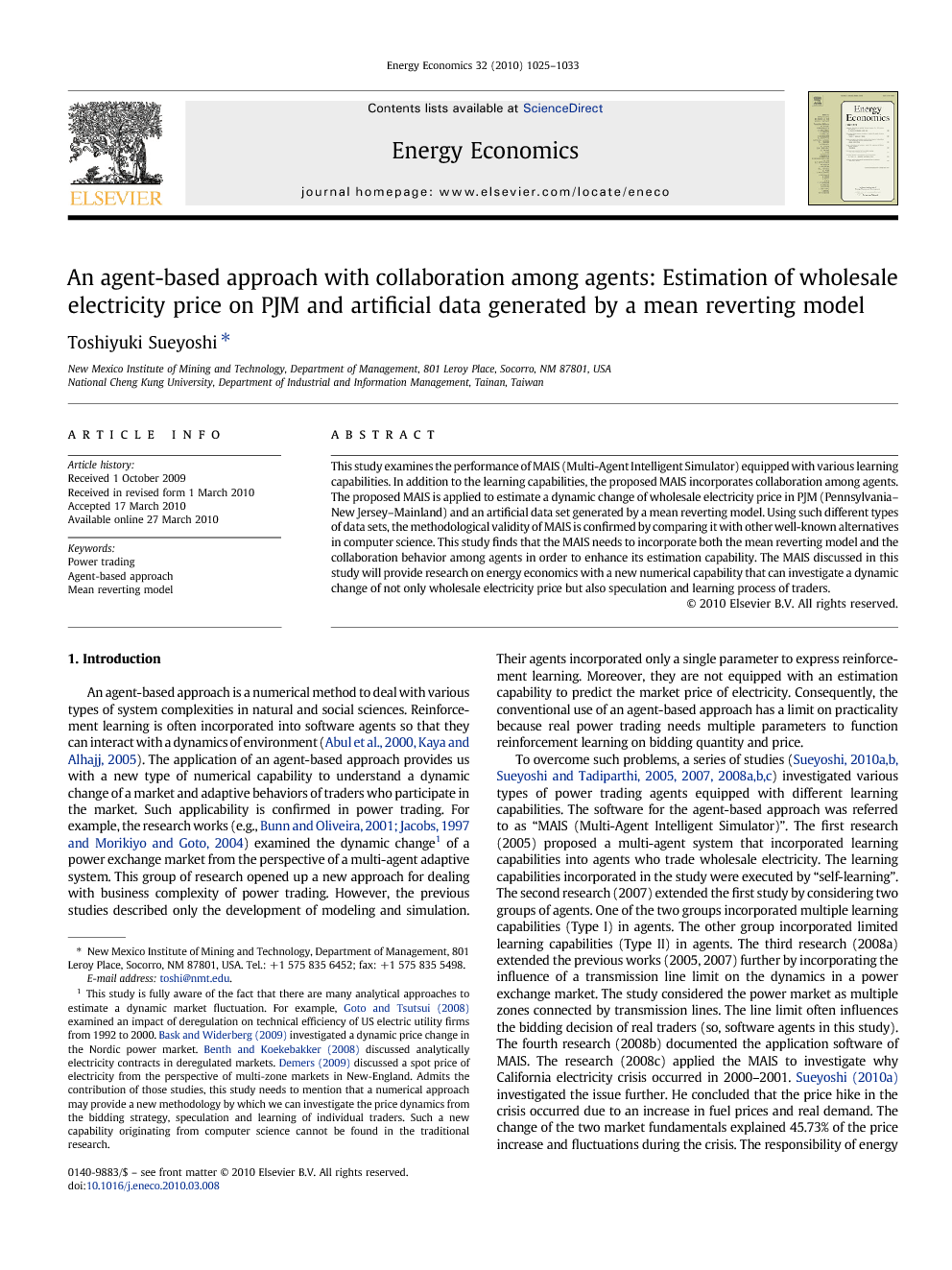 This study examines the performance of MAIS (Multi-Agent Intelligent Simulator) equipped with various learning capabilities. In addition to the learning capabilities, the proposed MAIS incorporates collaboration among agents. The proposed MAIS is applied to estimate a dynamic change of wholesale electricity price in PJM (Pennsylvania–New Jersey–Mainland) and an artificial data set generated by a mean reverting model. Using such different types of data sets, the methodological validity of MAIS is confirmed by comparing it with other well-known alternatives in computer science. This study finds that the MAIS needs to incorporate both the mean reverting model and the collaboration behavior among agents in order to enhance its estimation capability. The MAIS discussed in this study will provide research on energy economics with a new numerical capability that can investigate a dynamic change of not only wholesale electricity price but also speculation and learning process of traders.

An agent-based approach is a numerical method to deal with various types of system complexities in natural and social sciences. Reinforcement learning is often incorporated into software agents so that they can interact with a dynamics of environment (Abul et al., 2000 and Kaya and Alhajj, 2005). The application of an agent-based approach provides us with a new type of numerical capability to understand a dynamic change of a market and adaptive behaviors of traders who participate in the market. Such applicability is confirmed in power trading. For example, the research works (e.g., Bunn and Oliveira, 2001, Jacobs, 1997 and Morikiyo and Goto, 2004) examined the dynamic change1 of a power exchange market from the perspective of a multi-agent adaptive system. This group of research opened up a new approach for dealing with business complexity of power trading. However, the previous studies described only the development of modeling and simulation. Their agents incorporated only a single parameter to express reinforcement learning. Moreover, they are not equipped with an estimation capability to predict the market price of electricity. Consequently, the conventional use of an agent-based approach has a limit on practicality because real power trading needs multiple parameters to function reinforcement learning on bidding quantity and price. To overcome such problems, a series of studies (Sueyoshi, 2010a, Sueyoshi, 2010b, Sueyoshi and Tadiparthi, 2005, Sueyoshi and Tadiparthi, 2007, Sueyoshi and Tadiparthi, 2008a, Sueyoshi and Tadiparthi, 2008b and Sueyoshi and Tadiparthi, 2008c) investigated various types of power trading agents equipped with different learning capabilities. The software for the agent-based approach was referred to as “MAIS (Multi-Agent Intelligent Simulator)”. The first research (2005) proposed a multi-agent system that incorporated learning capabilities into agents who trade wholesale electricity. The learning capabilities incorporated in the study were executed by “self-learning”. The second research (2007) extended the first study by considering two groups of agents. One of the two groups incorporated multiple learning capabilities (Type I) in agents. The other group incorporated limited learning capabilities (Type II) in agents. The third research (2008a) extended the previous works (2005, 2007) further by incorporating the influence of a transmission line limit on the dynamics in a power exchange market. The study considered the power market as multiple zones connected by transmission lines. The line limit often influences the bidding decision of real traders (so, software agents in this study). The fourth research (2008b) documented the application software of MAIS. The research (2008c) applied the MAIS to investigate why California electricity crisis occurred in 2000–2001. Sueyoshi (2010a) investigated the issue further. He concluded that the price hike in the crisis occurred due to an increase in fuel prices and real demand. The change of the two market fundamentals explained 45.73% of the price increase and fluctuations during the crisis. The responsibility of energy utility firms was 21.41%. The policy implication regarding the California electricity crisis was different from well-known economic studies which attributed the price hike to the exercise of market power. Finally, Sueyoshi (2010b) examined strategic collaborations among traders in the California electric crisis. The study found that the learning speed of traders became slow when a large fluctuation occurred in the power exchange market. The learning speed depended upon the type of traders, their learning capabilities and the fluctuation of market fundamentals. The degree of collaboration among traders gradually reduced during the electricity crisis. An important feature of their research efforts is that they have documented a high level of estimation capability to predict the dynamic price change of wholesale electricity. However, the previous studies, except Sueyoshi (2010b), implicitly assume that agents do not collaborate with each other in a power exchange market. Moreover, the proposed use of MAIS does not consider a mean reverting model that is widely recognized as a simulation procedure for power trading. The two issues are drawbacks of the previous studies on MAIS applied to power trading. To overcome the drawbacks, this study examines the following three new research agendas, all of which have been never explored in the previous studies. First, to confirm how much the proposed MAIS predicts the dynamic change of electricity, we compare it with other well-known approaches in computer science. Methodological alternatives for the comparison include NN (Neural Networks), GA (Genetic Algorithm), and SVM (Support Vector Machines). In the comparative study, we measure the estimation capability of MAIS, using a real data set concerning PJM and various data sets generated by a mean reverting model. The PJM (Pennsylvania–New Jersey–Mainland) originates from the three states and now covers most of states in the north-east region of the United States. The organization is the largest US Independent System Organizer (ISO) that controls power exchange markets and a huge transmission system. The PJM is highly regarded by many individuals involved in the electric power industry. Thus, this study examines the wholesale price fluctuation of PJM by the proposed MAIS. As explored in the previous studies (e.g., Sueyoshi, 2010a and Sueyoshi, 2010b), it is possible for us to apply the MAIS to other ISOs such as California ISO. Second, the mean reverting model has been widely used by many studies on the estimation of wholesale electricity price (e.g., Cartea and Figueroa, 2005 and Knittel and Roberts, 2005). The previous research on agent-based approach has never used the mean reverting model for their simulation studies. Finally, this study examines collaboration among agents and investigates how the collaboration influences the estimation result on the dynamic change of electricity price. Thus, this study provides new numerical results concerning how to design an agent-based approach from the perspective of collaboration among agents. The remaining structure of this study is organized as follows: Section 2 describes briefly an agent-based approach for power trading. Section 3 outlines the proposed simulation study. The section also discusses methodological alternatives and empirical results on PJM. Section 4 discusses the mean reverting model and its related results. Section 5 describes how collaboration among agents influences the estimation of electricity price. Section 6 summarizes this study along with future research extensions.

This study examined the price estimation capability of MAIS by using a real data set on PJM and an artificial data set generated by the mean reverting method. The estimation accuracy was improved by incorporating both the mean reverting method and the collaboration among agents. For example, the estimation accuracy of MAIS was 83.37% when we estimated the price fluctuation of PJM. See the bottom of the right hand side of Table 2. The estimation accuracy (83.37%) became a benchmark score for our comparison. The estimation accuracy was improved to 85.25% after we generated the price fluctuation of PJM by the mean reverting model. See the bottom of the right hand side of Table 5. The improved estimation accuracy was further extended to 90.88% after we incorporated the collaboration among agents into the proposed MAIS. See the mean score under the combination between the tolerance period (6%) and the agreement period (150) in Table 6. Such improvements clearly indicated that both the mean reverting model and the collaboration among agents could improve the estimation accuracy of the proposed MAIS. This study has five research tasks which need to be overcome in future. (a) First, we need to mathematically explore why MAIS outperforms the three alternatives in predicting the electricity price. The investigation will provide us with a mathematical guideline on the development of a new numerical approach to explore the dynamics of economics for power trading and other type of commodities (e.g., CO2, oil and natural gas). (b) Second, this study uses the mean reverting model that accounts into hours, days, and seasonal effects. The proposed model does not consider price spikes in data. That is a shortcoming of this study because many different models for mean reverting incorporate such jump diffusion. Therefore, we need to investigate the performance of MAIS by considering various mean reverting models with the jump diffusion. (c) Third, although all agents are equipped with Type I or Type II adaptive learning, this study does not consider some strategic learning that may occur in collaboration among them. Therefore, this study needs to examine what type of strategic learning has occurred in the PJM markets and how the learning has influenced their bidding strategies of agents. (d) Fourth, the proposed approach does not have any statistical inference so that we cannot examine simulation results by a statistical test. That is a shortcoming. (e) The last research issue is to examine whether generators are more actively involved in the collaboration process than wholesalers. The research inquiry is important because generators have more freedom than wholesalers in the selection of their decision variables. All the five research agendas will be investigated as the future extension of this study. Finally, it is hoped that this research makes a contribution in the development of a new numerical approach for energy economics. The computer-intensive numerical approach will be increasingly important because conventional analytical methods (e.g., mathematical models and econometrics) cannot deal with the complexity of energy business and policy. This study looks forward to seeing future extensions as discussed in this study.