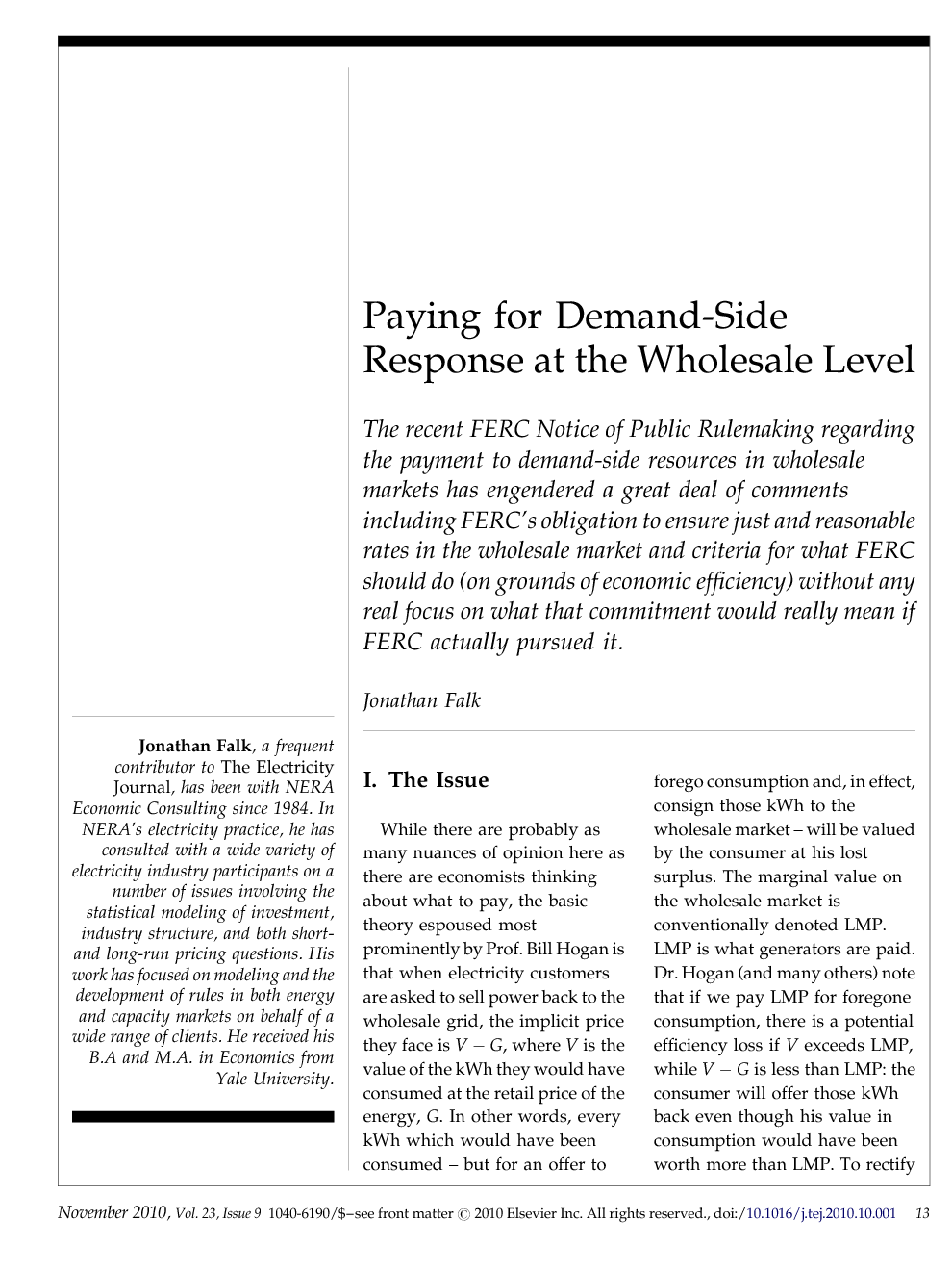 The recent FERC Notice of Public Rulemaking regarding the payment to demand-side resources in wholesale markets has engendered a great deal of comments including FERC's obligation to ensure just and reasonable rates in the wholesale market and criteria for what FERC should do (on grounds of economic efficiency) without any real focus on what that commitment would really mean if FERC actually pursued it.

The issue before the Federal Energy Regulatory Commission was to decide how much an independent system operator or regional transmission operator (ISO/RTO) should pay for demand response energy delivered to the wholesale market. One view is that a demand response resource (DRR) delivering the energy should be paid the locational marginal price (LMP) because that is what generators receive for delivering energy. The alternative view is that the DRR should be paid a lesser amount that accounts for the bill savings of the retail customers that produced the demand response that the DRR delivered. These savings occur because the retail customers’ demand reductions cause their meters to record smaller amounts of energy consumed so they avoid paying for the energy they sell through the DRR. Paying full LMP for demand response energy collectively produces compensation that exceeds LMP for the DRR and the retail customers it represents. This is because the DRR is paid LMP while its customers additionally enjoy bill savings by avoiding payment of the marginal energy rates in their respective retail tariffs (hereafter referred to as “G”).3 If these bill savings are not subtracted from the LMP payment the total compensation received for the demand response energy will be LMP + G, thereby providing an excessive incentive to reduce consumption. When that happens the productive value of retail customers’ foregone consumption is likely to exceed the cost that would have been incurred by wholesale market generators to produce and deliver that energy to the customers. Clearly, such an outcome is prima facie inefficient.Proponents favoring payment of full LMP argue that we cannot be sure that reducing the payment by G will produce an economically efficient result, primarily because of the many market imperfections that exist in energy markets, and ultimately because the “theory of second best” informs us so.4 At the same time, these naysayers fail to show how paying full LMP for demand response will produce a more desirable outcome. This article examines Order No. 745 from the following perspectives: •economic efficiency, •the nature of economic demand response, • FERC's legal obligation, •Implementation difficulty, •The Net Benefits Test, and • The last section summarizes my conclusions.