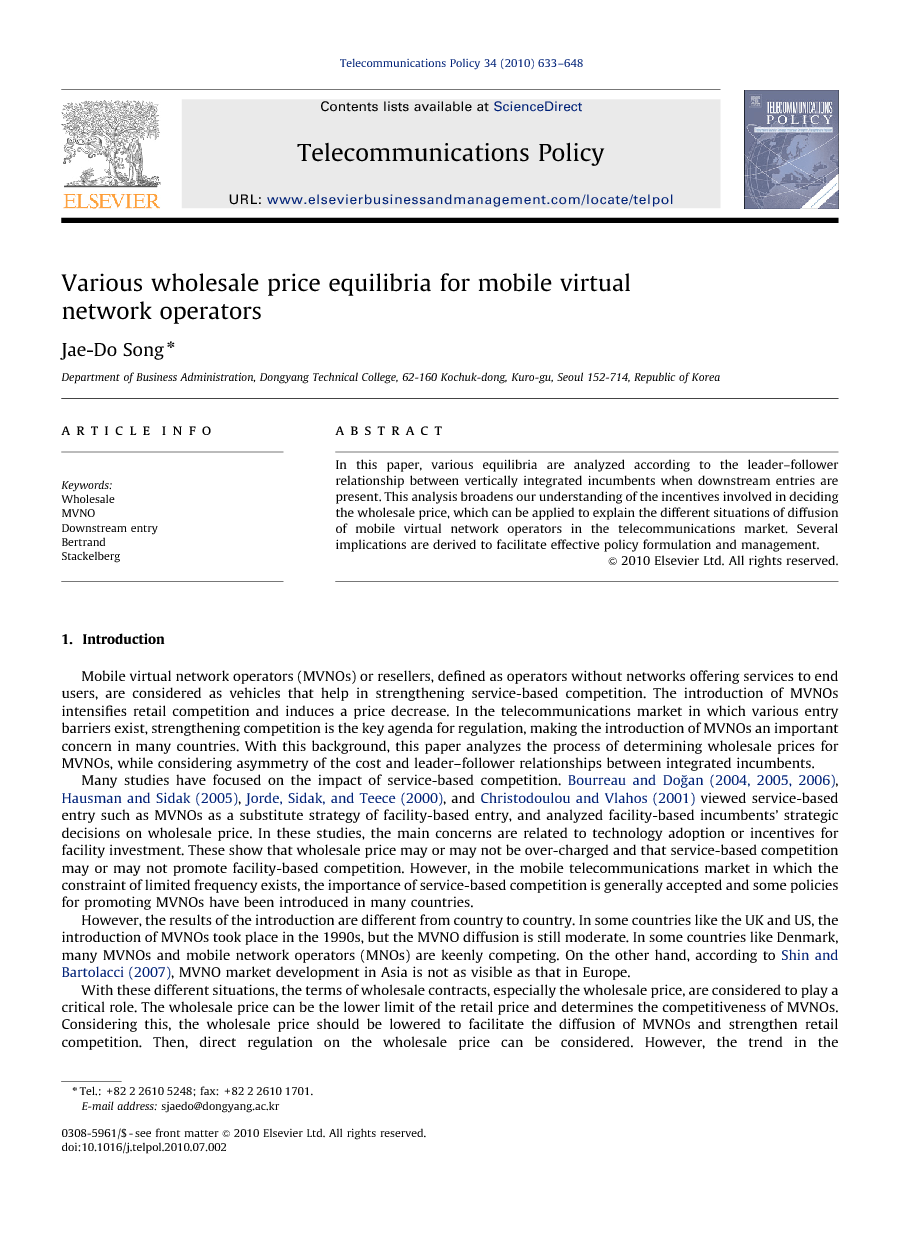 In this paper, various equilibria are analyzed according to the leader–follower relationship between vertically integrated incumbents when downstream entries are present. This analysis broadens our understanding of the incentives involved in deciding the wholesale price, which can be applied to explain the different situations of diffusion of mobile virtual network operators in the telecommunications market. Several implications are derived to facilitate effective policy formulation and management.

By reviewing various equilibria, a deeper understanding of the incentives involved in deciding the wholesale price has been provided, and some implications for regulators and managers have been formulated. However, the model does not consider many real world issues. First, based on a number of previous studies, it is argued that a higher level of differentiation strengthens the incentive to voluntarily accommodate MVNOs. Although the model in this paper does not consider differentiation, some implications about the relationship of efficiency and differentiation are collected from the discussion in Section 6. Service differentiation and efficiency in cost have similar roles in determining the possibility (boundary condition) of voluntary accommodation. However, these have different roles in the resulting equilibrium. Considering wholesale competition, more efficient entrants result in a much lower retail price and market share within the retail market. More differentiation, however, mitigates the impacts. Second, the relationship between the MNO and MVNO should be considered. There are many instances where MVNOs are established as joint ventures, an act which can be interpreted as an effort to create cooperation and efficiency. Ulset (2002) suggested that MVNOs offering complex bundles of innovative, value-added services will not be competitively sustainable as separate firms. However, this relationship can result in switching cost, or can increase the influence of MNOs. For this reason, the wholesale competition cannot be Bertrand-like. Therefore, the players, including the regulator, should consider the impact of this relationship on the incentives of accommodation and on wholesale competition. Finally, the purpose of the service-based competition should be reviewed. Many studies have focused on the impacts of service-based competition on facility-based competition. The analysis in this paper has shown the possibility for wholesale competition to reinforce asymmetry among MNOs. This suggests that strong wholesale competition and diffusion of MVNOs can harm the long-term sustainability of facility-based competition. Therefore, regulators should have a long-term perspective for the market.