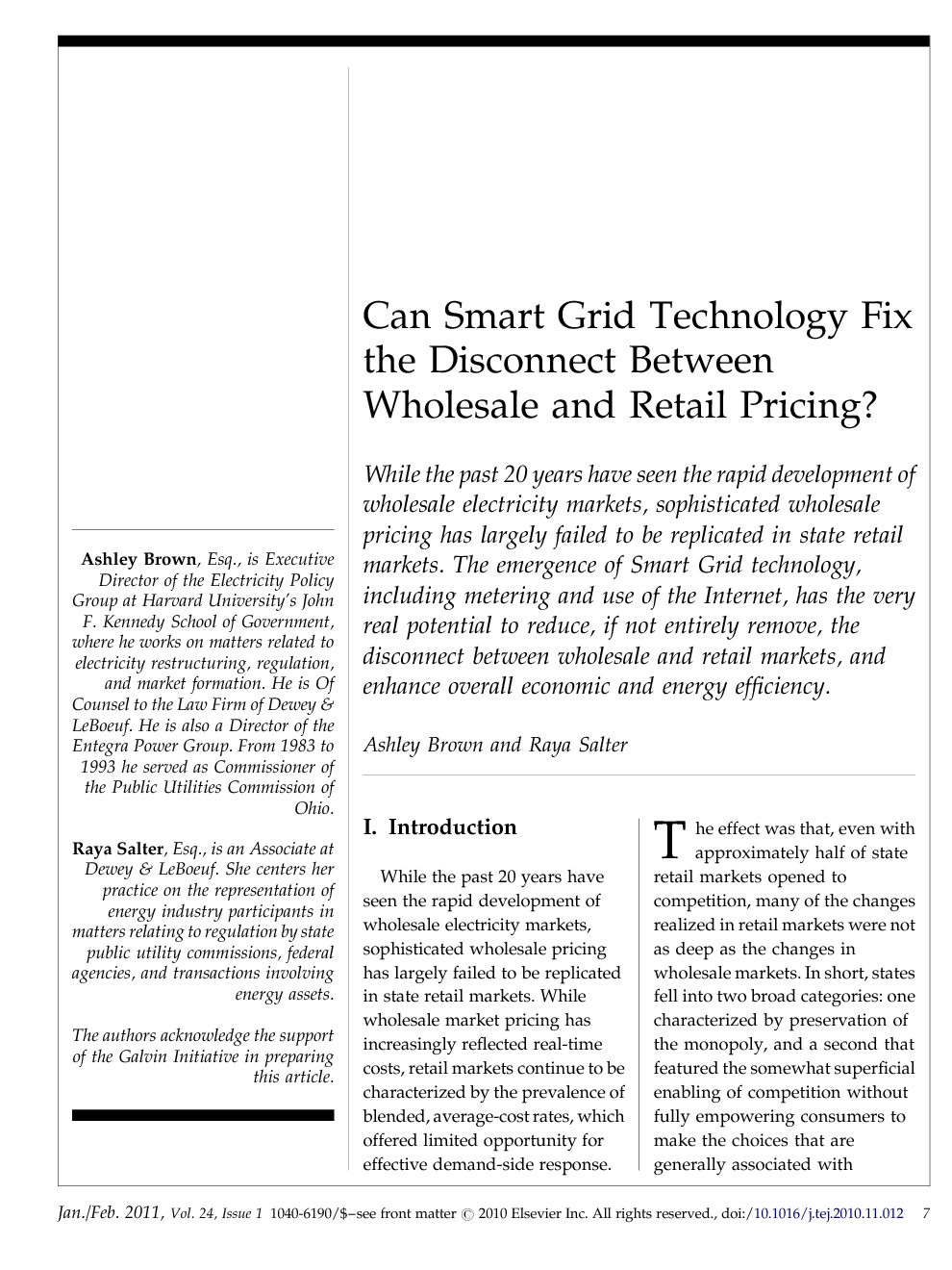 While the past 20 years have seen the rapid development of wholesale electricity markets, sophisticated wholesale pricing has largely failed to be replicated in state retail markets. The emergence of Smart Grid technology, including metering and use of the Internet, has the very real potential to reduce, if not entirely remove, the disconnect between wholesale and retail markets, and enhance overall economic and energy efficiency.

While the past 20 years have seen the rapid development of wholesale electricity markets, sophisticated wholesale pricing has largely failed to be replicated in state retail markets. While wholesale market pricing has increasingly reflected real-time costs, retail markets continue to be characterized by the prevalence of blended, average-cost rates, which offered limited opportunity for effective demand-side response. The effect was that, even with approximately half of state retail markets opened to competition, many of the changes realized in retail markets were not as deep as the changes in wholesale markets. In short, states fell into two broad categories: one characterized by preservation of the monopoly, and a second that featured the somewhat superficial enabling of competition without fully empowering consumers to make the choices that are generally associated with competitive markets, most notably to reduce demand in response to meaningful price signals. There are a variety of reasons for this disconnect between wholesale and retail pricing. They include political concerns about passing on price spikes to customers, lack of technology, notably metering, that would allow real-time information to flow to customers and enable billing to reflect that reality, and economic disincentives inherent in the regulatory regimes in most states for incumbent utilities to invest in “smart” technology and/or demand-side activities. The emergence of Smart Grid technology, including metering and use of the Internet, has the very real potential to reduce, if not entirely remove, the disconnect between wholesale and retail markets, and enhance overall economic and energy efficiency. Providing end users with real-time, actionable information on prices and market conditions and new ancillary service markets that value consumer action and incentivize efficiency can enable meaningful demand response. Smart switches, smart distribution devices, automation, communications, and selective redundancy, of course, can also dramatically improve reliability and power quality. Incumbent1 utilities in both restructured and non-restructured states have incentives and disincentives to make Smart Grid technology investments. Whether they are the appropriate vehicle for implementing and managing the implementation of smart devices or technology to achieve greater demand-side participation in the marketplace is a critical question that needs thorough examination. What follows is a discussion of that question in a regulatory, behavioral, and economic context.

The complex situation surrounding incumbents, the role they play, and incentives they are given to bring on new products, services, and opportunities through the deployment of new technology can constitute a formidable barrier to new entrants coming into the market. Examples of the issues that flow from status of the incumbent include who owns and controls the meters, who can access customer data and under what conditions, billing operations, interface and sharing information with customers (including price information), backup services for self-generators and micro-grid operators, and a host of other services that have traditionally been provided on a bundled basis by incumbent utilities. In fact, for each of these activities the incumbent can be a facilitator and/or a competitor to any would be provider of Smart Grid technology or the services enabled by smart grid. Policymakers and regulators in each jurisdiction will have to ponder how to approach incumbents. Give them incentives or reduce their role? 1 Over the course of this analysis, the authors use the terms “incumbent,” “utility,” and “LSE,” or variations thereof. The terms are varied for stylistic and readability reasons, but are meant, for purposes of this article, to be synonymous. 2 In most jurisdictions, purchased power is simply a passthrough mechanism in which utilities have no opportunity to earn a profit, but do run the risk of a prudence disallowance by regulators. Thus, many have contended that for utilities, purchased power constitutes an asymmetrical risk with no upside but some downside risk. 3 It needs to be recognized that the role of the incumbent varies widely from jurisdiction to jurisdiction. As noted above, in some states the LSE's are distribution only. In the case of the Electric Reliability Council of Texas (ERCOT) service territories, they are wires companies only, whereas in Florida they are vertically integrated. In state such as Ohio and Illinois, they are vertical but functionally unbundled. In other states such as California and Colorado they are vertically integrated to some extent but not to the extent of their full requirements. These differences are worth noting because it biases the way that management views its self-interest in significant ways. The lost revenue issue, for example, to a vertically integrated company is a decidedly more consequential matter than to a wires company because it has far more capital at risk. 4 Some have contended that the issue is best addressed through traditional ratemaking by simply employing calculated and reasonable cost allocation shifts from fixed to variable. 5 There has been some controversy over how much precision should be required by regulators to ascertain exactly how much of the shortfall in the revenue requirement was due to company conservation programs, as opposed to revenues lost for other reasons such as weather, recession, or business migration out of the territory being served. Lack of precision, of course, has been seized upon by critics of decoupling, who argue that imprecise measures of demand-side efficiency gains achieved through utility programs have led to socialization of risks best borne by utilities. 6 Obviously, governmental grants, matching funds, and other financial incentives that are discussed above also serve to reduce any residual reluctance by incumbents to invest in smart technology. 7 A good example where regulators might look more sympathetically on technology risks is where there is a large local economic development interest in a project, such as a “clean coal” plant in a coal producing state. 8 Regulators are very likely to be concerned about asymmetrical risk for consumers. Were they to pre-approve investment in new, unproven technology, or even new programs with proven technology, they would, in effect, be spreading all of the risks to cornhuskers. If the program proves to be a failure, cornhuskers pay. If it succeeds, other than having the benefit of the use, all other benefits, such as expertise or intellectual property, accrues to private actors who were shielded from the economic risks by regulatory pre-approval. 9 The electric utility industry ranks fairly low among major U.S. industries in undertaking and supporting research and development. 10 As the earlier discussion shows, the minimal monopoly found is in states such as Texas, where there is a single wires company to deliver electricity to end users. In other states, that monopoly extends to the meter, and perhaps billing as well. At the other end of the spectrum are states such as Florida which have vertically integrated monopolies, although it should be noted that even there, the utilities may go out for bid to secure power supply from generators rather than expanding their own generating assets. In between, of course, there are other variations on the degree of monopoly power such as mandated competitive procurement policies for LSEs, and various arrangements in states with nominally open retail markets, as to how default energy supply is procured.