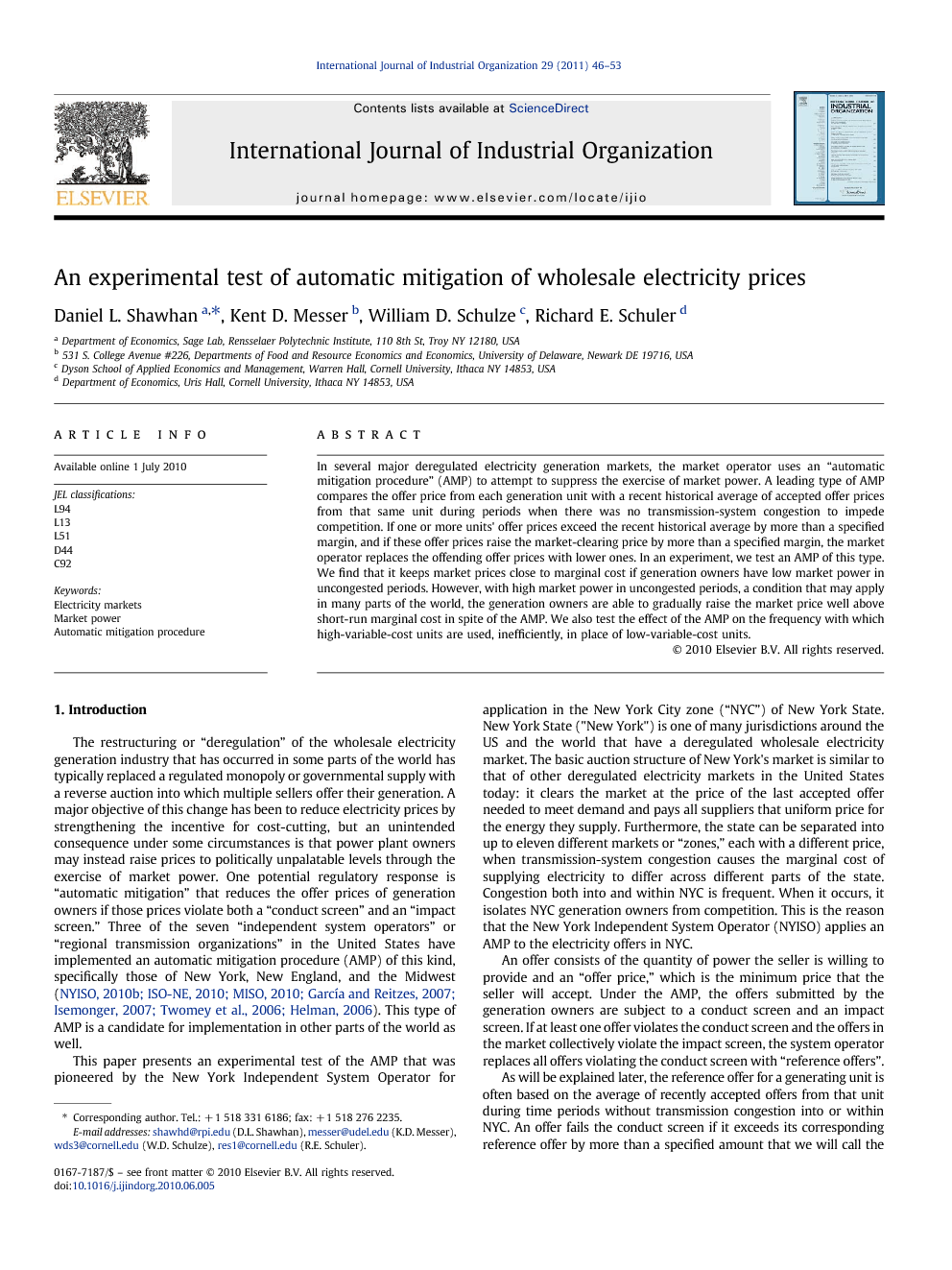 In several major deregulated electricity generation markets, the market operator uses an “automatic mitigation procedure” (AMP) to attempt to suppress the exercise of market power. A leading type of AMP compares the offer price from each generation unit with a recent historical average of accepted offer prices from that same unit during periods when there was no transmission-system congestion to impede competition. If one or more units' offer prices exceed the recent historical average by more than a specified margin, and if these offer prices raise the market-clearing price by more than a specified margin, the market operator replaces the offending offer prices with lower ones. In an experiment, we test an AMP of this type. We find that it keeps market prices close to marginal cost if generation owners have low market power in uncongested periods. However, with high market power in uncongested periods, a condition that may apply in many parts of the world, the generation owners are able to gradually raise the market price well above short-run marginal cost in spite of the AMP. We also test the effect of the AMP on the frequency with which high-variable-cost units are used, inefficiently, in place of low-variable-cost units.

Our experiment tests the effects of a wholesale electricity price automatic mitigation procedure (AMP) used in NYC, an area with few generation owners and limited power import capacity. AMPs are already used in some other electricity markets, and may be considered in additional markets, particularly in other areas subject to concerns about the influential exercise of market power by owners of power generation units. Under the lower-market-power condition, which was designed to represent the current situation in NYC, electricity prices during congested rounds were significantly lower under the AMP than without it. The mean congested-round price during rounds 31–50 was 716% above marginal cost without the AMP, but only 8% above marginal cost when the AMP was in place. The AMP did not have a statistically significant effect on prices in uncongested rounds, which were 25% above marginal cost without the AMP and 13% above marginal cost with the AMP. We also tested the AMP under a different demand pattern (the “higher-market-power treatments”), in which demand remains high relative to supply even during times without transmission-system congestion. In these treatments, the AMP did significantly reduce the mean congested-round price in rounds 31–50, from $717 without the AMP to $200 with it. However, the AMP did not keep electricity prices nearly as close to marginal cost as it did under the lower-market-power treatments. The mean price was 221% above marginal cost in the uncongested rounds and 150% above marginal cost in the congested rounds. The high uncongested-round market power that produced these results may apply in the many parts of the world with few generation owners or with severe shortages of generation capacity. High reliance on stochastic generation sources or plug-in hybrid electric cars charging off peak may make high uncongested-round market power more common. Our result from these treatments indicates that in such places, the tested AMP may not prevent the mean price of generation from rising well above marginal cost. In summary, this paper experimentally tests an automatic mitigation procedure used to suppress the exercise of market power in NYC. We find that this mechanism can reduce market prices, particularly prices at times with transmission congestion. The AMP kept prices close to marginal cost in our “lower-market-power” treatments. However, if generation owners have enough market power even during periods without transmission-system congestion, the owners are able to gradually raise the market price well above short-run marginal cost in spite of the automatic mitigation procedure.