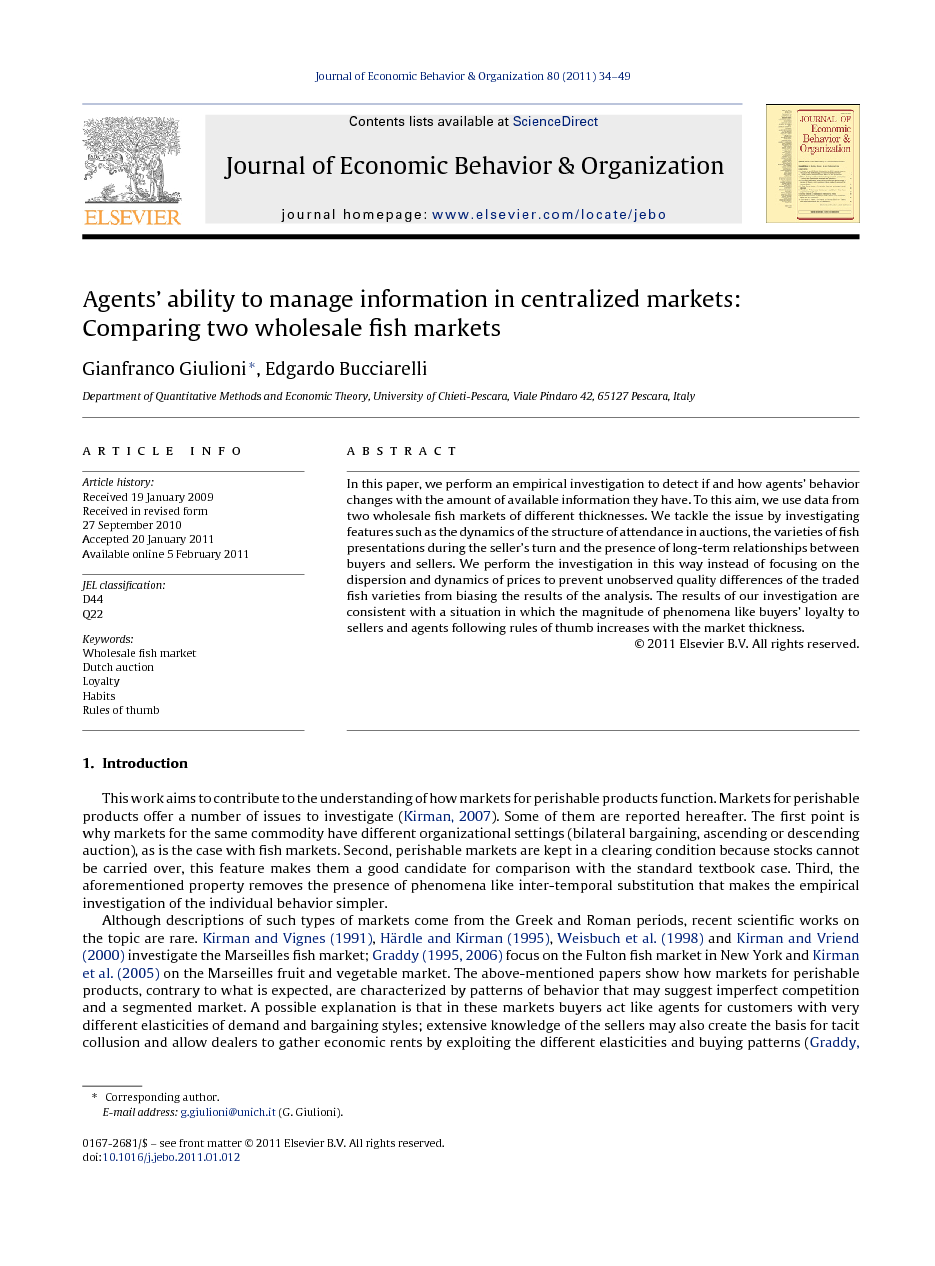 In this paper, we perform an empirical investigation to detect if and how agents’ behavior changes with the amount of available information they have. To this aim, we use data from two wholesale fish markets of different thicknesses. We tackle the issue by investigating features such as the dynamics of the structure of attendance in auctions, the varieties of fish presentations during the seller’s turn and the presence of long-term relationships between buyers and sellers. We perform the investigation in this way instead of focusing on the dispersion and dynamics of prices to prevent unobserved quality differences of the traded fish varieties from biasing the results of the analysis. The results of our investigation are consistent with a situation in which the magnitude of phenomena like buyers’ loyalty to sellers and agents following rules of thumb increases with the market thickness.

This work aims to contribute to the understanding of how markets for perishable products function. Markets for perishable products offer a number of issues to investigate (Kirman, 2007). Some of them are reported hereafter. The first point is why markets for the same commodity have different organizational settings (bilateral bargaining, ascending or descending auction), as is the case with fish markets. Second, perishable markets are kept in a clearing condition because stocks cannot be carried over, this feature makes them a good candidate for comparison with the standard textbook case. Third, the aforementioned property removes the presence of phenomena like inter-temporal substitution that makes the empirical investigation of the individual behavior simpler. Although descriptions of such types of markets come from the Greek and Roman periods, recent scientific works on the topic are rare. Kirman and Vignes (1991), Härdle and Kirman (1995), Weisbuch et al. (1998) and Kirman and Vriend (2000) investigate the Marseilles fish market; Graddy, 1995 and Graddy, 2006 focus on the Fulton fish market in New York and Kirman et al. (2005) on the Marseilles fruit and vegetable market. The above-mentioned papers show how markets for perishable products, contrary to what is expected, are characterized by patterns of behavior that may suggest imperfect competition and a segmented market. A possible explanation is that in these markets buyers act like agents for customers with very different elasticities of demand and bargaining styles; extensive knowledge of the sellers may also create the basis for tacit collusion and allow dealers to gather economic rents by exploiting the different elasticities and buying patterns (Graddy, 2006). In the papers analyzing the Marseilles fish market, the authors find the presence of a significant level of loyalty from buyers to sellers. These long-term relationships could also prevent achieving a situation of perfect competition. In all of the cited works, however, the analyzed markets differ greatly from the ideal theoretical market mainly because their exchanges take place after a bilateral bargaining process instead of being the outcome of a centralized market organization. Upon analyzing the Pescara and Giulianova1 wholesale fish markets, this paper aims to contribute towards this strand of economic literature. Below, we will refer to these markets with the acronym MIPE, which is a shortcut for the Italian language expression Mercato Ittico PEscara, and MIGI that contracts Mercato Ittico GIulianova. The present work differentiates itself from the cited literature in two aspects: first of all, the investigated markets have a centralized structure organized as a Dutch auction. From this point of view, our situation is closer to the theoretical one than that analyzed in previous works which analyze markets where exchanges take place on the basis of bilateral bargaining. Secondly, we marginally rely on the observed prices to avoid the effect of unobserved qualitative differences.2 We perform an empirical investigation to identify if and how agents’ behavior changes with the amount of available information. Indeed, the two observed markets differ in size with MIPE being significantly larger than MIGI, so that operating in the first one implies managing a larger amount of information. Our aim is to investigate if agents take advantage of being in a larger context with a greater amount of information or if they are motivated to adopt rules of thumb and habits because of increasing difficulties in managing large information sets. The topic of the use of habits and rules by economic agents and organizations has been long debated in economics. (The most well-known works are perhaps those of Herbert Simon.) A relevant article from our point of view is the one by Hodgson (1997), which identifies seven circumstances “[…] in which habits and rules are advantageous for human decision-making or action.” (Hodgson, 1997, p. 664). These circumstances are: optimization, extensiveness, complexity, uncertainty, cognition, learning, and communication. Hodgson maintains that the paradigm of optimization is not universal. It is only one of the seven circumstances that are reliant on habits and rules. The concepts of extensiveness and complexity seems particularly relevant to markets for perishable commodities. In our opinion, extensiveness mainly concerns buyers’ behavior in markets characterized by bilateral bargaining (Kool et al., 1997, for example analyze the farmers’ buying process). For the markets under scrutiny in this paper, the concept of complexity, which in Hodgson’s taxonomy concerns the limited computational ability of agents (see also Heiner, 1983), is relevant. Our main interest is to investigate how the use of rules and habits changes with the market thickness. The eventual increase in relevance of these phenomena when the size of markets under investigation increases, could be seen as a signal that rules and habits are more grounded on complexity rather than optimization.3 This fact is also in line with the observation that the concept of optimization loses its significance in changing and uncertain environments (Dosi and Egidi, 1991) like the ones we are observing. The paper is organized as follows. After the description of the markets (Section 2), we examine, in turn, the behavior of sellers and buyers. For the former (Section 3), we discuss in particular their decisions in selecting fish varieties presented during a market session. The questions we want to answer are as follows: are there preferred structures? If yes, are they rationalizable? In analyzing buyers (Section 4), we focus on a different topic: the buyer–seller relationship. The main goal of this section is to identify the degree of buyers’ loyalty in the analyzed markets. In Section 5, a global picture of the markets is obtained by analyzing the buyers’ and sellers’ decisions on their weekly attendance structure. Section 6 presents concluding remarks.

By using two detailed data sets, in this paper, we have investigated buyers’ and sellers’ behavior in the Pescara and Giulianova wholesale fish markets. Both markets have a centralized structure consisting in two simultaneous Dutch auctions. The different thicknesses of these two nearby markets give us the opportunity to start investigating the issue of agents’ ability to manage information. In other words, it is an opportunity to check under which conditions the outcome of real markets is close to that foreseen by economic theory. Unlike the existing literature, we tackle this issue directly analyzing agents’ behavior instead of using considerations about prices. This is because we prefer to avoid risking that the unobserved quality differences of the fish within the same category bias the results of the analysis. We investigate first sellers’ decisions on how they decide the sequence of cases (fish varieties) to appear on the belt during a market session. The practice to present cheap fish before the expensive ones detected in the data is not rationalized by the presence of an optional value to wait along the whole duration of the market session, but it could be justified by the presence of such a value at the very beginning of the exchanges. For buyers, we build the transaction structure each would have had if he had bought without caring about the sellers’ identity. After comparing their real behavior with this benchmark case, we have elements to assert that the degree of loyalty is higher in MIPE than in MIGI, and the loyalty is still present in a centralized market organized as a sequential Dutch auction, provided it has a significant thickness. Finally, we analyze the dynamics of buyers’ and sellers’ weekly attendance structure. Our elaborations suggest that agents, especially buyers, are better able to exploit the opportunities of the market when operating in a small context. As mentioned in the introduction, this work can be placed into a broader perspective that highlights how agents act when following habits and rules (Hodgson, 1997). The results from the analysis above are consistent with the fact that as the thickness of the market increases, the magnitude of phenomena like buyers’ loyalty to sellers and the presence of agents following rules of thumb increase. Using Hodgson’s taxonomy, our results suggest that the higher complexity of thicker centralized fish markets strengthens the adoption of “optimally imperfect decisions” (Baumol and Quandt, 1964). Even if their intensity is not as strong as in decentralized markets like Marseilles, we should not underrate their existence. It could be the case their importance would dramatically increase as soon as we move to larger markets, but this is a topic that we intend to investigate in the future. In fact, the present work is limited to the observation of two minor Italian wholesale markets. It is our intention in the future to extend our analysis to additional and more important markets. If the importance of the adoption of habits and rules will be found to be higher in larger markets, the results obtained in this paper could be viewed as the onset of the phenomena observed in markets without a centralized structure like that of the Marseilles fish and fruit and vegetable markets. In other words, our work could strengthen the opinion that the regular operation of markets departs from the archetypal.