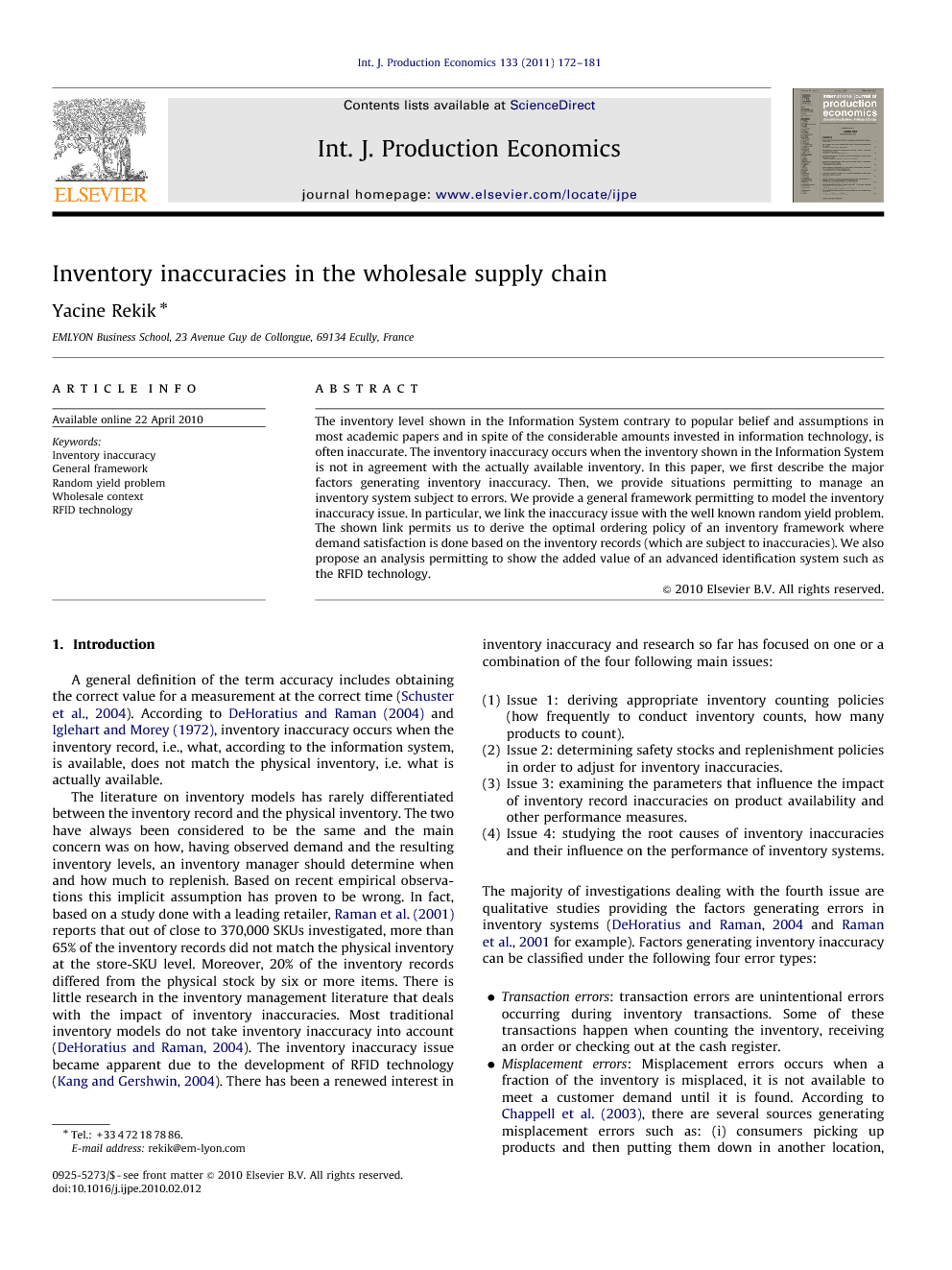 A general definition of the term accuracy includes obtaining the correct value for a measurement at the correct time (Schuster et al., 2004). According to DeHoratius and Raman (2004) and Iglehart and Morey (1972), inventory inaccuracy occurs when the inventory record, i.e., what, according to the information system, is available, does not match the physical inventory, i.e. what is actually available. The literature on inventory models has rarely differentiated between the inventory record and the physical inventory. The two have always been considered to be the same and the main concern was on how, having observed demand and the resulting inventory levels, an inventory manager should determine when and how much to replenish. Based on recent empirical observations this implicit assumption has proven to be wrong. In fact, based on a study done with a leading retailer, Raman et al. (2001) reports that out of close to 370,000 SKUs investigated, more than 65% of the inventory records did not match the physical inventory at the store-SKU level. Moreover, 20% of the inventory records differed from the physical stock by six or more items. There is little research in the inventory management literature that deals with the impact of inventory inaccuracies. Most traditional inventory models do not take inventory inaccuracy into account (DeHoratius and Raman, 2004). The inventory inaccuracy issue became apparent due to the development of RFID technology (Kang and Gershwin, 2004). There has been a renewed interest in inventory inaccuracy and research so far has focused on one or a combination of the four following main issues: (1)Issue 1: deriving appropriate inventory counting policies (how frequently to conduct inventory counts, how many products to count). (2)Issue 2: determining safety stocks and replenishment policies in order to adjust for inventory inaccuracies. (3)Issue 3: examining the parameters that influence the impact of inventory record inaccuracies on product availability and other performance measures. (4) Issue 4: studying the root causes of inventory inaccuracies and their influence on the performance of inventory systems. The majority of investigations dealing with the fourth issue are qualitative studies providing the factors generating errors in inventory systems (DeHoratius and Raman, 2004 and Raman et al., 2001 for example). Factors generating inventory inaccuracy can be classified under the following four error types: •Transaction errors: transaction errors are unintentional errors occurring during inventory transactions. Some of these transactions happen when counting the inventory, receiving an order or checking out at the cash register. •Misplacement errors: Misplacement errors occurs when a fraction of the inventory is misplaced, it is not available to meet a customer demand until it is found. According to Chappell et al. (2003), there are several sources generating misplacement errors such as: (i) consumers picking up products and then putting them down in another location, (ii) clerks not storing products on the correct shelf at the right time and (iii) clerks losing products in the backroom. •Shrinkage: Shrinkage include inventory theft, spoilage and damage. Concerning damage and spoilage, customers can cause damages to products and as a consequence making them unavailable for sales. Some examples are tearing of a package to try on the contained cloth item, wearing down a shoes by trying it on and walking, erasing software on computers on demonstration, spilling food on clothes, and scratching a car during a test drive (Bensoussan et al., 2005). •Product quality, yield and supply process: When the product quality is low or a production process has a low yield or a supply process is unreliable, the physical inventory is not known and as a consequence may be different from the inventory in the information system. According to Bensoussan et al. (2005), receipts are usually added to the inventory without a full inspection process. The consequence is that the information system may consist of both non defective products and defective products which are not available for sales.

Our major contribution in this paper was to provide an analysis of a general framework which models the inventory inaccuracy issue. Our aim was to prove that it exists a connection between the inventory inaccuracy issue and the random yield problem. We showed this connection and we proved that an inventory inaccuracy problem can be seen as an extended random yield problem. Based on this connection, we were able to analytically analyze the additive error setting. We also presented the two situations that the inventory manager may use in order to control an inventory system subject to inaccuracy problems. Conditions under which RFID deployment is cost effective were also studied. For our further research, we will extend the proposed framework for the multi period setting as well as the decentralized scenario. In our ongoing research, we will also consider the case of multiplicative and mixed error settings.