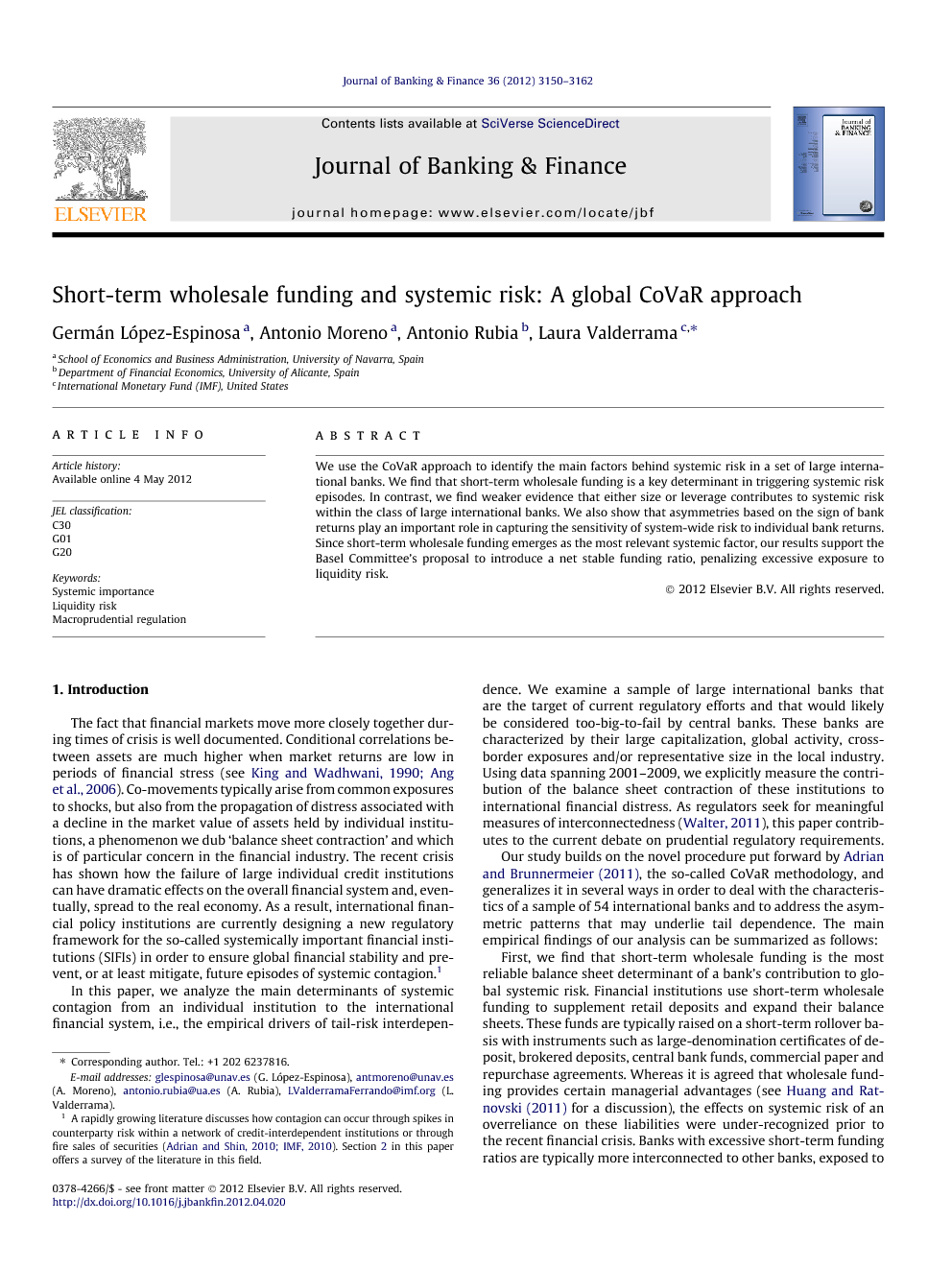 We use the CoVaR approach to identify the main factors behind systemic risk in a set of large international banks. We find that short-term wholesale funding is a key determinant in triggering systemic risk episodes. In contrast, we find weaker evidence that either size or leverage contributes to systemic risk within the class of large international banks. We also show that asymmetries based on the sign of bank returns play an important role in capturing the sensitivity of system-wide risk to individual bank returns. Since short-term wholesale funding emerges as the most relevant systemic factor, our results support the Basel Committee’s proposal to introduce a net stable funding ratio, penalizing excessive exposure to liquidity risk.

In this paper we examine some of the main factors driving systemic risk in a global framework. We focus on a set of large international institutions that would, in principle, be deemed “too big to fail” by financial regulators and are therefore of major interest for policy makers. For this class of firms, the evidence based on the CoVaR methodology indicates that short-term wholesale funding – a variable strongly related to interconnectedness and liquidity risk exposure – is positively and significantly related to systemic risk, whereas other features of the firm, such as leverage or relative size, seem to provide little incremental information about systemic risk. This suggests that short-term wholesale funding subsumes most of the relevant information on systemic risk conveyed by other characteristics of the firm. The fact that systemic risk can be predicted by balance sheet variables – short-term wholesale funding, in particular – with a sufficiently large forecast horizon has important policy implications, as it prompts the regulator to take pre-emptive action against banks with riskier positions. We also compare the relative influence of balance sheet variables on systemic risk for EMU and US banks. Our findings suggest that the short-term wholesale funding channel has been operating mainly through non-US banks, especially via EMU banks. One possible explanation for this fact is that banks in the newly created monetary area had an increased pool of funding available due to the emergence of the euro interbank market. As a result, higher short-term borrowing by these institutions may have triggered an increased level of systemic risk. In future research, we intend to further examine these underlying international differences. Regulators are currently developing a methodological framework within the context of Basel III that attempts to embody the main factors of systemic importance (see Walter, 2011). These factors are categorized as size, interconnectedness, substitutability, global activity and complexity, and will serve as a major reference to determine the amount of additional capital requirements and funding ratios for SIFIs. Our analysis provides formal empirical support to the Basel Committee’s proposal to penalize excessive exposures to liquidity risk by showing that short-term wholesale funding, a variable capturing interconnectedness, makes a significant contribution to systemic risk. Furthermore, since our findings suggest that some factors are much more important than others in determining systemic risk contributions, an optimal capital buffer structure on systemic banks could, in principle, be designed by suitably weighting the different driving factors as a function of their relative importance. This is an interesting topic for further research. Similarly, the evidence in this paper also offers empirical support to justify the theoretical models that argue that short-term wholesale funding can generate large systemic risk externalities (see, for instance, Perotti and Suárez, 2011). Given the relevance of liquidity strains as a contributing factor to systemic risk, the regulation of systemic risk could be strengthened by giving incentives to disclose contingent short-term liabilities, in particular those related to possible margin calls under credit default swap contracts and repo funding. In non-tabulated results, our study also points to the role of large trading books as a source of systemic risk for those banks that were recapitalized during the crisis. As a result, the 2010 revamp of the Basel II capital framework to cover market risk associated with banks’ trading book positions will not only decrease individual risk but will also help to mitigate systemic risk.