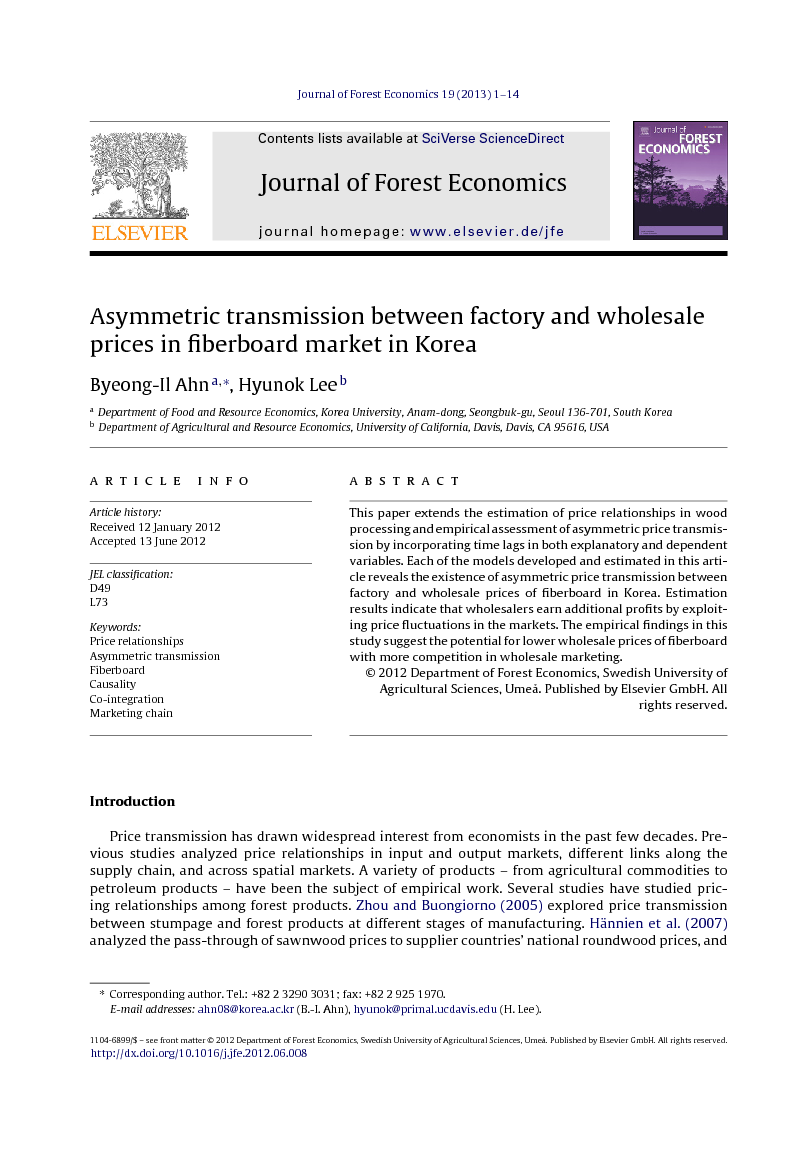 This paper extends the estimation of price relationships in wood processing and empirical assessment of asymmetric price transmission by incorporating time lags in both explanatory and dependent variables. Each of the models developed and estimated in this article reveals the existence of asymmetric price transmission between factory and wholesale prices of fiberboard in Korea. Estimation results indicate that wholesalers earn additional profits by exploiting price fluctuations in the markets. The empirical findings in this study suggest the potential for lower wholesale prices of fiberboard with more competition in wholesale marketing.

Price transmission has drawn widespread interest from economists in the past few decades. Previous studies analyzed price relationships in input and output markets, different links along the supply chain, and across spatial markets. A variety of products – from agricultural commodities to petroleum products – have been the subject of empirical work. Several studies have studied pricing relationships among forest products. Zhou and Buongiorno (2005) explored price transmission between stumpage and forest products at different stages of manufacturing. Hännien et al. (2007) analyzed the pass-through of sawnwood prices to supplier countries’ national roundwood prices, and Koutroumanidis et al. (2009) investigated price transmission between the producer and consumer prices in the round-wood markets. The common assumption used in previous studies of forest products, except for Koutroumanidis et al. (2009), is symmetric price transmission. That is, the magnitude of price transmission does not depend on the direction of the initial price shock. Koutroumanidis et al. (2009) investigated asymmetric price transmission at the consumer and producer levels of the Greek round wood market where imports constitute the dominant share of consumption. Studies applied to other commodities have attempted to investigate empirically this assumption using a more general framework that separates the regimes by the direction of initial price shock and allows the possibility of non-symmetric transmission (Karrenbrock, 1991, Azzam, 1999, Meyer and von Cramon-Taubadel, 2004, Kaufmann and Laskowski, 2005 and Ahn and Kim, 2008). Following this line of literature, commonly referred to as asymmetric price transmission, the present study adds significantly to the price transmission literature on forest products by investigating the structure of price transmission in the context of the vertical layers of fiberboard markets in Korea.1 Focusing on the factory and wholesale levels of the marketing chain, we examine short-term as well as long-term price responses of wholesale prices to changes in factory prices. In addition to providing empirical evidence related to asymmetry, previous studies on asymmetric price transmission explored the interpretation of asymmetric price transmission. If the markets were efficient, a price shock in one market affects the price of the related market in a symmetric fashion. This suggests that the test of asymmetry could be used to investigate market efficiency, and the evidence of asymmetry would be consistent with a market with asymmetric transaction costs, market power or some other structure (Meyer and von Cramon-Taubadel, 2004, Carman and Sexton, 2005 and Koutroumanidis et al., 2009). A number of studies of agricultural commodities suggested that the main driver of the asymmetric price transmission in a vertical marketing chain is market power (McCorriston et al., 1998, Azzam and Schroeter, 1995, Chen and Lent, 1992, Bunte and Peerlings, 2003 and Carman and Sexton, 2005). The party with market power can influence the price to increase profits. Under such a situation, market participants with market power exploit the situation differentially depending on the direction of the initial price shock. We also explore the implications of our test results for the underlying market structure of the Korean fiberboard industry. The Korean fiberboard industry is large and growing rapidly, with annual sales value close to $1 billion in 2010.2Lee et al. (2008) suggest that wholesalers of fiberboard in Korea exercise market power over the fiberboard producers. While there are many producers in the upstream market, the downstream market is dominated by three major distributors (wholesalers) of fiberboard in Korea.3 Of course, evidence of asymmetry does not necessarily indicate market power. Carlton (1989) suggests that unless the change in marginal cost (the procuring price from upstream marketing chain) is sufficiently large, retailers do not implement a price change due to a menu or re-pricing cost. Bettendorf and Verboven (2000) supported this claim empirically in the context of vertical markets for coffee. Other explanations include Ball and Mankiw (1994) who focused on asymmetric adjustment of nominal prices during the time of inflation, and Reagan and Weitzman (1982) who showed how the competitive industry results in asymmetric price transmission through their inventory holding behavior. Finally, Bailey and Brorsen (1989) pointed out that asymmetric (or imperfect) information about costs may cause asymmetric price transmission.4 We formally test the asymmetry of price transmission between producers and wholesalers using 120 months of time series price data. The model separates the two regimes of the initial price shock and incorporates time lags of both explanatory and dependent variables, which enables us to investigate the price adjustment process between prices in different stages of the marketing chain. Using the error correction modeling approach, we also test the long-run asymmetry in the price transmission. The empirical models are discussed in the next section. We present the three versions of asymmetric price transmission models based on an autoregressive distributed lag model. Data description and preliminary tests on data and model specification, including the tests on lag order, unit-root, causality and cointegration follow. We then report the model estimation results, and conclude the paper with summary and implications.

In order to investigate a structure of price transmission that allows responses that are different for positive or negative initial price shocks, this paper extends existing empirical models by incorporating time lags for both explanatory and dependent variables. Beginning with a simple asymmetric model, we extended asymmetry to the lagged own variables, and adopted an error correction approach, which allows asymmetry in the long-run pricing behavior. These models help explain factory and wholesale time series of prices of the Korean fiberboard industry. Asymmetric price transmission is investigated for the current factory price, the cumulative of current and lagged factory prices, the cumulative effect of lagged own prices, and the effect related to deviations from the long-run price path. In almost all cases, our estimation results indicate strong empirical support for asymmetric price transmission in Korean fiberboard markets. Our findings on asymmetry indicate that in response to a change in factory price, the wholesale price moves more swiftly and in greater magnitude when the factory price rises than when it falls. However, the negative asymmetry of the lagged own price effects, combined with the negative asymmetry of the long-run effects, dampens the positive asymmetry of factory price effects, causing the overall asymmetric effect to be moderated. Our component analysis of the wholesalers’ margin over the factory price indicates that, while the positive asymmetry of factory price effects widens the margin between the wholesale and factory prices, the offsetting effects due to the negative asymmetry of previous own price and long-run effects are equally strong, leading to the relatively stable margin over time. Such balancing market forces may stem from readily available substitutes (for fiberboard) or elastic demand for fiberboard at the upstream marketing chain. Or, in terms of wholesalers’ pricing behavior, it may be possible that wholesalers apply a base mark-up pricing rule first as discussed in von Cramon-Taubadel (1998). Then they adjust the wholesale price by reflecting the changes in factory and prior wholesale prices in the short run. In this case, the long run relationship View the MathML source(Ptd=α0+α1Ptu+ut) can be interpreted as a base pricing rule, and the stable margin implies wholesalers may apply the base pricing rule first and adjust the wholesale price in response to the change in factory price in the short run. While we have examined the mechanics of asymmetric price transmission thoroughly, we have not been able to link empirical evidence of asymmetric price transmission to a plausible cause. Further work in this area would include more detailed investigation of the source of asymmetric price response. Among the specific causes, the menu cost hypothesis is, in general, more suitable in a situation involving the retail market than the wholesale market, even though we need more information about the industry to be concrete. Price rigidity can be certainly observed when forward contracts or long-term contracts are commonly arranged with a lock-in price. The typical situation for the cost share hypothesis (relatively a small share of the upstream product in the cost of the downstream cost) emerges mainly with processed goods, and not with products such as fiberboard. Inventory holding could be plausible, except for the fact that fiberboard is a bulky product and the storage cost may be large relative to value. While we have mentioned the market power hypothesis, a concrete investigation requires much more information about the industry structure and the pricing methods. This may entail gathering more detailed information about quantities and collecting data from the individual firms in the wholesale market.