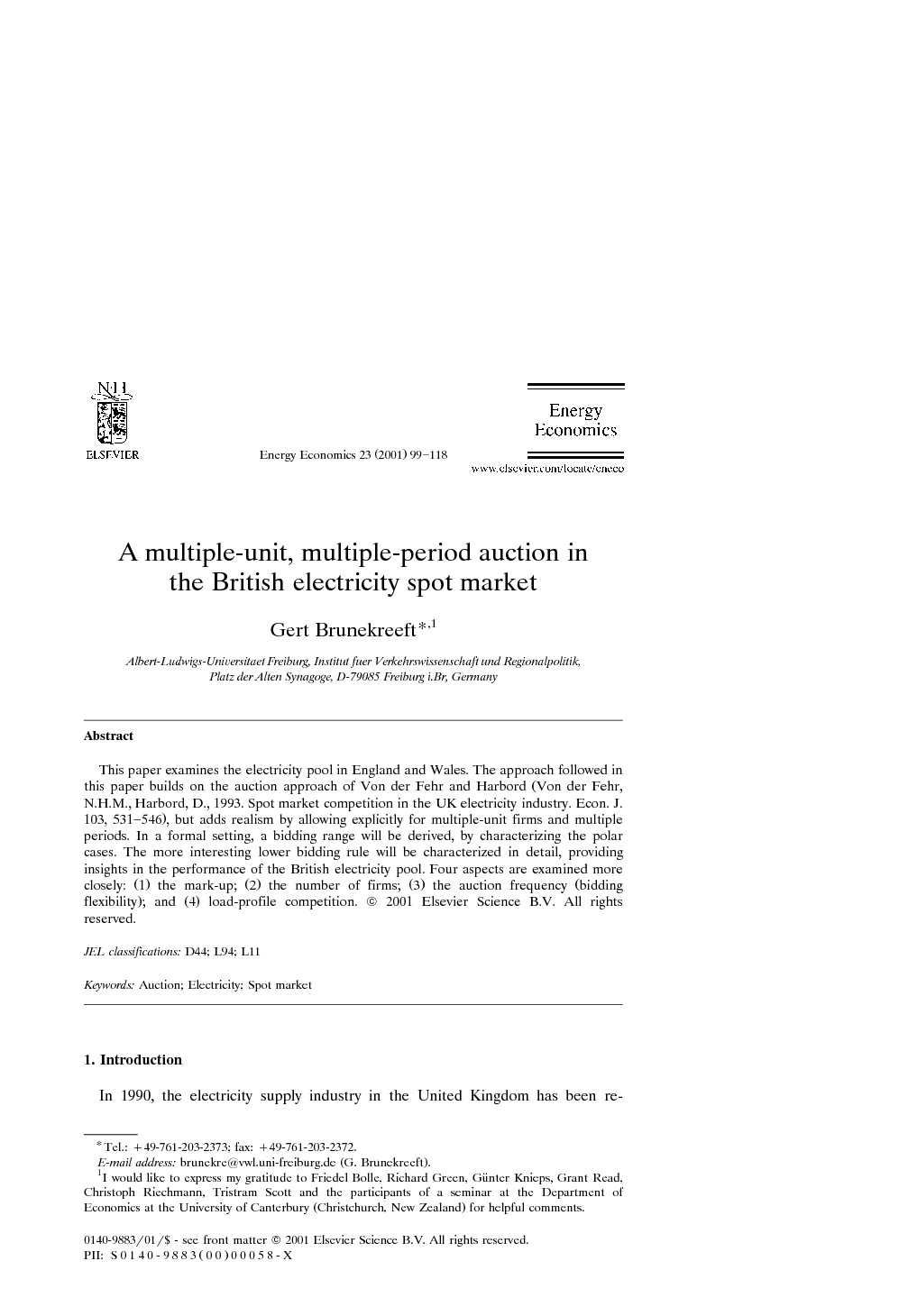 This paper examines the electricity pool in England and Wales. The approach followed in this paper builds on the auction approach of Von der Fehr and Harbord (Von der Fehr, N.H.M., Harbord, D., 1993. Spot market competition in the UK electricity industry. Econ. J. 103, 531–546), but adds realism by allowing explicitly for multiple-unit firms and multiple periods. In a formal setting, a bidding range will be derived, by characterizing the polar cases. The more interesting lower bidding rule will be characterized in detail, providing insights in the performance of the British electricity pool. Four aspects are examined more closely: (1) the mark-up; (2) the number of firms; (3) the auction frequency (bidding flexibility); and (4) load-profile competition.

In 1990, the electricity supply industry in the United Kingdom has been reformed thoroughly, setting an example for various other countries.2 One of the major elements was the introduction of a (centralized) electricity pool with the purpose to coordinate the (competitive) generation of electricity. It has been expressed that the generation firms ‘play a game’ in determining who will be producing how much and against which price. The idea is that the generation firms offer willingness-to-produce against an offered price. A central institution — the electricity pool — schedules which firms with which generation units will actually produce how much and against which price. The procedure to determine generation-quantities and -prices is accurately specified in the so-called pool rules. The ‘game’ which is played by the generation firms has attracted academic attention. Two approaches have been developed to model the pool and thereby the behavior of the generation firms. First, and the most influential, stems from Bolle (1992) and Green and Newbery (1992), with a recent and powerful extension by Newbery (1998). They have modeled the pool by means of so-called supply-function equilibria. The advantage of this approach is that it is tractable to a large extent; the functions are continuous and differentiable, which allows mathematical manipulation. As the framework stands it turns out that it is fairly easy to extend analysis of the pool without using high-powered mathematics. The other side of the same coin, however, is exactly the assumed continuity; it is an abstraction. In reality, the generation units are not atomistically small. The marginal costs of a firm are, due to multiple generation units, rather discontinuous or stepwise.3 Another problem is that in the supply-function approach demand is taken to be elastic, which does not entirely conform to the pool rules. These criticisms triggered an alternative approach to model the pool: the auction approach by Von der Fehr and Harbord (1993). They note with regard to the supply-functions approach (Von der Fehr and Harbord, 1993, p. 532): ‘[a]s we demonstrate [...], the particular types of [supply functions] equilibria [...] do not generalize to a model where sets are of positive size’. Its main element is stepwise increasing bids, which is inherently discontinuous. Whereas this might be realistic, it contains the major difficulty as well. It hardly allows mathematical manipulation. Nevertheless, Von der Fehr and Harbord come up with some insightful conclusions, which invite further research in this direction. The auction approach offered by Von der Fehr and Harbord seems to have been somewhat short of attention in comparison to the supply-function approach. However, the auction approach does offer further potential to extract insights in the pool behavior. It is the purpose of this paper to extend the auction approach of Von der Fehr and Harbord and extract further insights in the performance of the British electricity pool. In particular, Von der Fehr and Harbord's Proposition 2 will be specified in a multiple-unit context. It explicitly allows for multiple-unit firms and multiple periods. The paper derives a tractable mathematical expression, which appears to characterize the real-world bidding curve quite well. Consequently, analysis of the bidding curve provides further insights in the performance of the pool. The topicality remains high, since whereas the electricity pool in England and Wales has been pioneering, by now, various other countries have installed similar pooling systems.4 Recently, Wolfram (1998) examined the pool empirically, assuming a multiple-unit auction explicitly, thereby staying on the trail set out by Von der Fehr and Harbord (1993). In particular, Wolfram (1998) concentrates on the size (i.e. the number of generation units) of the firms. In a consultancy document, Culy and Read (1995) come to interesting conclusions for the Victorian power pool by means of simulations. A conclusion is that increasing the frequency of bidding increases efficiency. The same has been conjectured for the Norwegian power pool by Knivsflå and Rud (1995). The model in this paper will provide theoretical arguments for several of the empirical observations. Section 2 will first briefly describe the basics of the pool rules. Section 3 will then summarize the basics of the approach of Von der Fehr and Harbord. The main contribution of this paper is in Section 4. It will specify the bidding behavior, relying heavily on the Propositions 4 and 5 in Von der Fehr and Harbord (1993, p. 536). Section 5 analyses the bidding curve by means of a simulation.

In the literature, the British electricity pool is modeled in two ways. First, by the supply-functions approach (Bolle, 1992, Green and Newbery, 1992 and Newbery, 1998). Second, by the auction approach by Von der Fehr and Harbord (1993). The major difference between the two approaches is that the former takes bids of generation units continuously, whereas the latter takes account of stepwise changes in bids (or, costs) of generation units; the auction approach considers generation units to be of positive size. This paper concentrates on and extends the approach of Von der Fehr and Harbord (1993), mainly by allowing firms to have multiple units. The main contribution of the paper is the formal derivation and examination of a bidding rule which extends Proposition 2 in Von der Fehr and Harbord (1993) for the multiple-unit context. Basically, the firms use a weighted average of the marginal cost and the bid of the next expensive unit as the reference for the lower bidding rule. The firm sets a ‘limit’ bid, such that there is just no incentive for the next expensive unit to undercut. In Section 5, the (lower) bidding rule is examined by plotting the mathematical expression. The bidding rule seems to approximate the real-world situation fairly well. A closer examination of the mark-ups reveals the general lesson, that large firms have a lot to lose and therefore tend to be less competitive than small firms. Simulation of the effect of the number of firms reveals that a smaller number of firms increases the bids unambiguously. A smaller number of firms implies, ceteris paribus, larger firms and larger firms are less competitive, because they have more to lose from undercutting. This corresponds to empirical observation for the British pool by Wolfram (1998). It is argued and shown that a higher auction frequency decreases the bids and mark-ups. A higher auction frequency means that instead of having one bid which is valid for the entire day, the day can be broken up in several periods for which separate bids may be made. For example, one bid for every 30 min, or, as has been done in a simulation, breaking up the day into four periods and thus allowing four separate bids. This provides a theoretical basis for simulation results for the Victorian power pool by Culy and Read (1995) and for a recommendation for the Norwegian power pool by Knivsflå and Rud (1995). Last, it is argued from the bidding rule that a load-profile monopoly decreases competitive pressure.