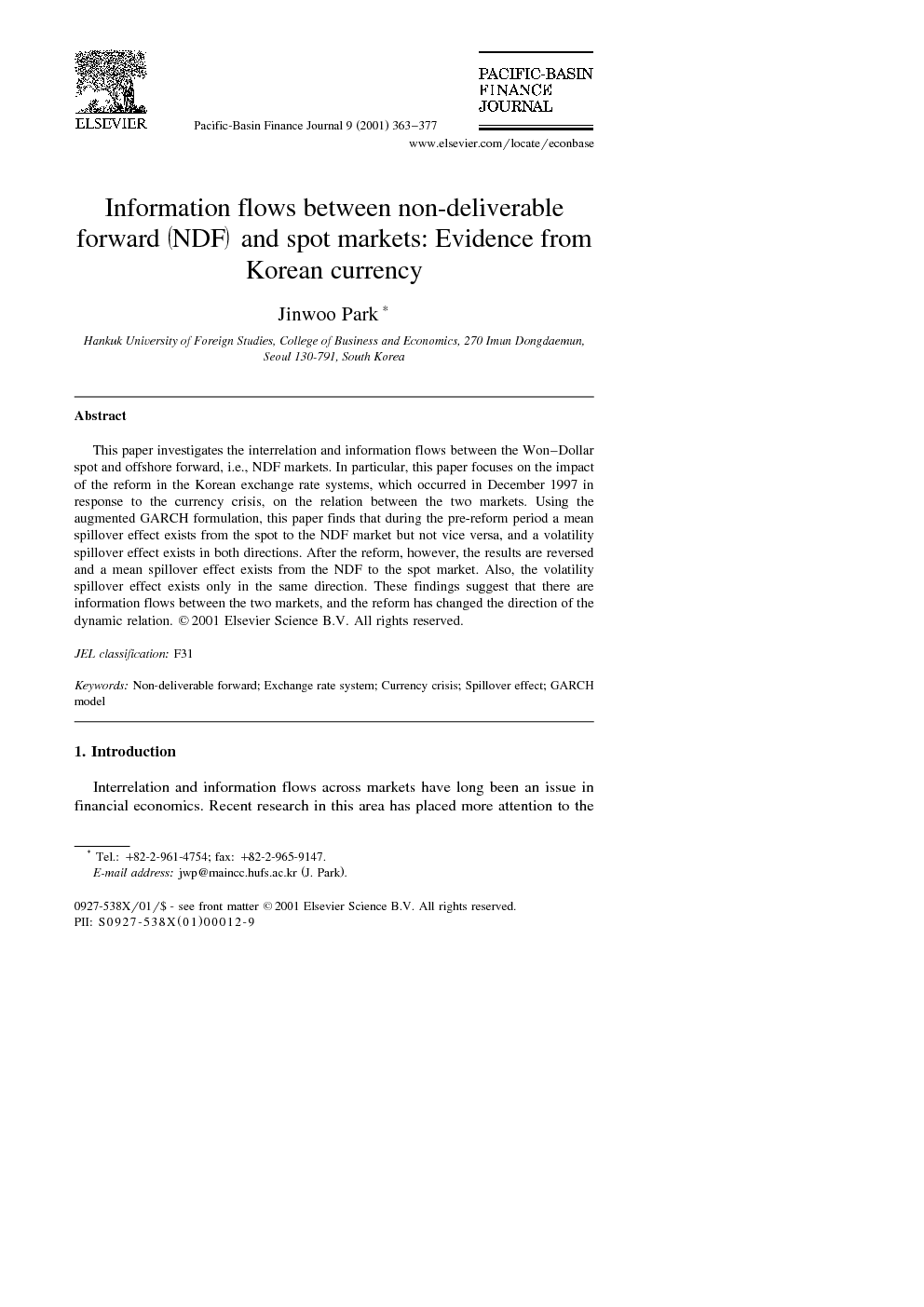 Interrelation and information flows across markets have long been an issue in financial economics. Recent research in this area has placed more attention to the short-term dynamics of price changes and the transmission mechanism of information. Many studies find an interdependence of price changes and volatility across international stock markets (see King and Wadhwani, 1990, Hamao et al., 1990, Eun and Shim, 1989, Park and Fatemi, 1993 and Wei et al., 1995), between futures and spot markets (see Chan et al., 1991 and Hung and Zhang, 1995), and between domestic and offshore money markets (see Fung and Isberg, 1992 and Lo et al., 1995). These studies investigate not only whether price changes in one market can help predict price changes in other markets but also whether changes in price volatility in one market are positively related to price volatility observed in other markets. Exploring price volatility is reasonable in view of the fact that Clark (1973), Tauchen and Pitts (1983) and Ross (1989) that show that the volatility of an asset's price, not the asset's simple price change, is related to the rate of flow of information to the market. This paper examines the interrelation and information flows between the Korean Won–Dollar spot and its offshore forward, namely NDF (Non-Deliverable Forward), markets. NDF is a currency forward contract in which cash settlement occurs instead of physical delivery. In 1996, the Asian NDF market emerged in Hong Kong and Singapore for currencies such as the Indian Rupee, Korean Won, Taiwanese Dollar, Philippine Peso, Chinese Renminbi, and Vietnamese Dong. The NDF market has attracted investors who need to either hedge currency exposure or take speculative currency positions but are hindered by restrictions and/or illiquidity in the local forward market. Among these currencies, the Korean Won–Dollar NDF is the biggest one with daily transaction values up to US$ 500 million. Despite the growing interest in the Asian NDF market, few so far have studied the newly emerged offshore market and its relation with the domestic currency market. A fundamental question often asked in finance is whether the same asset trading in two different markets sells at the same price at each point in time. In a perfect market, where currency forward and spot prices simultaneously reflect the same aggregate information, price discrepancies would be instantly arbitraged away. However, various market frictions and investment restrictions may affect the relation between the offshore NDF and domestic currency markets. In particular, the Asian NDF market has developed for currencies of countries where the government controls the currency market and restricts foreign capital movements. Market segmentation arises because of impediments to international investment. Thus, knowledge of the interrelation and information flows between the offshore NDF and domestic currency markets is important to an understanding of financial market integration. Such an understanding has important implications. First, the stronger the relation between the offshore NDF and domestic currency markets, the more difficult it becomes for governments to pursue independent economic policies designed to achieve their intended result. Second, for investors who need to hedge currency exposure or take speculative positions using the NDF market instead of the illiquid local forward market, knowledge of the cross-market relation constitutes important information for their investment strategy. Additionally, interdependence between the offshore NDF and domestic currency markets raises a possibility that the two markets are not equal in their capacity to discover new information and one market serves as a primary market for price discovery. In investigating the relation between the domestic and offshore markets, the case of the Korean currency market attracts special attention because it has recently experienced substantial changes in its exchange rate system. The currency crisis that started in Thailand in June 1997 was followed by Malaysia, Indonesia and the Philippines, and the contagion finally spread to Korea in October 1997. The crisis led to an IMF bailout of the Korean economy. In December 1997, in accordance with IMF recommendation, the Korean government eliminated the boundaries on daily movement of the Won–Dollar exchange rate and restrictions on foreign capital movements. As a result, the Korean exchange rate system shifted from managed-float to a free-floating system and foreign capital inflows increased dramatically. Thus, these changes in policy provide an opportunity to investigate the impact of financial deregulation on the interrelation and information flows between the domestic and offshore markets. The remainder of the paper is organized as follows. Section 2 outlines the statistical methods used in this research. Section 3 describes the data and provides preliminary statistics. Empirical results are presented in Section 4. Summary and conclusions follow in Section 5.

This paper investigates the interrelation and information flows between the Won–Dollar spot and offshore forward, i.e., NDF, markets. In particular, this paper focuses on the impact of the reform in the Korean exchange rate system on the relationship between the two markets. We find that daily changes of the spot and NDF rates can be approximated by a MA(1)–GARCH(1,1) model. Using the GARCH formulation similar to Hamao–Masulis–Ng specification, this paper tests the spillover effects in conditional mean and volatility between the spot and NDF markets. The results show that during pre-reform period there is a mean spillover effect from the spot to the NDF market and not the other way round, and that a volatility spillover effect exists in both directions. After the reform, however, the results are reversed and the mean spillover effect exists from the NDF to the spot market. Also, the volatility spillover effect exists only in the same direction. These findings have several implications. First, there exist short-term dynamics and long-term equilibrium relation between the offshore NDF and domestic currency markets. More importantly, the relation is time varying. Consistent with earlier studies, which argue that financial markets are becoming more integrated as they are less regulated, the relation is stronger during post-reform period. Second, a mean spillover effect exists from the spot to the NDF market during the pre-reform period. This effect reverses itself during the post-reform period. The same results are observed in the causality test. These results indicate that prior to the reform the NDF rates lag the underlying spot rates. This follows from the fact that the latter rates are heavily influenced by unexpected government involvement in the currency market. After the reform, however, reflecting the reductions in market imperfections in the domestic market and the increased influence of foreign factors, the offshore NDF market leads the domestic spot market. Third, a volatility spillover effect exists in both directions during the pre-reform period. In the post-reform period, this effect exists only from the NDF to the spot market. If each market participant has access to different sets of information and infers valuable information from volatility of the other market, significant spillover effect can be found in that direction. Together with the mean spillover effect from the NDF to the spot market, the variance spillover effect existing in the same direction implies that the deregulation has had a significant impact on the interrelation and information flows between the two markets. The findings are consistent with extant studies on the relation between domestic and Euromarket interest rates. These studies document that innovations in domestic markets lead offshore markets in the earlier period (see Kaen and Hachey, 1983, Hartman, 1984 and Swanson, 1988), but with the rapid movements toward deregulation and the presence of enhanced arbitrage, the causal relationship has reversed (see Fung and Isberg, 1992 and Lo et al., 1995). In conclusion, after deregulation, information in price innovations that originate in the offshore forward market is transmitted to the domestic currency market and the forward market serves an important price discovery role. Consequently, the domestic financial markets are no longer exempt from the impact of changes taking place in the offshore markets since investors can infer valuable information from the offshore markets. This means that it becomes more difficult for governments to pursue independent economic policies in the presence of influence from the offshore market that it has no control over.