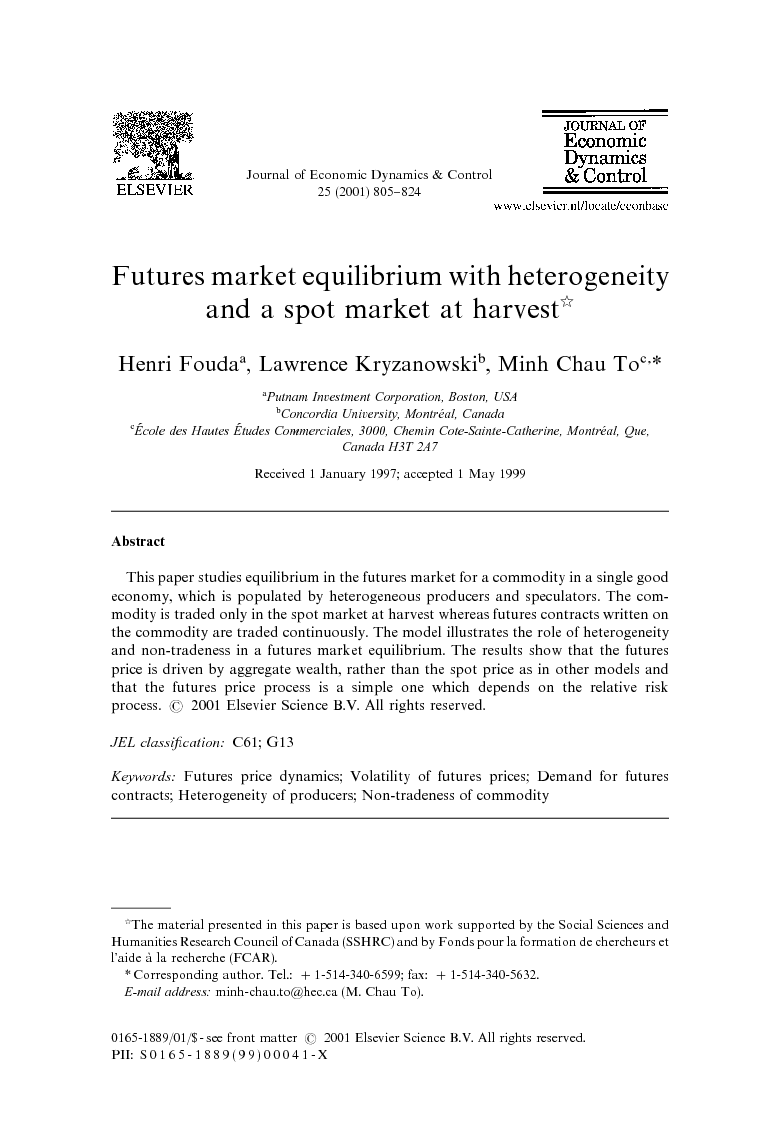 This paper studies equilibrium in the futures market for a commodity in a single good economy, which is populated by heterogeneous producers and speculators. The commodity is traded only in the spot market at harvest whereas futures contracts written on the commodity are traded continuously. The model illustrates the role of heterogeneity and non-tradeness in a futures market equilibrium. The results show that the futures price is driven by aggregate wealth, rather than the spot price as in other models and that the futures price process is a simple one which depends on the relative risk process.

Hedging and equilibrium are studied herein for a setting in which: (1) heterogeneous producers hedge to reduce their respective terminal cash flow risks, which emanate from non-traded production technologies, by trading in futures contracts written on the commodity they grow, and (2) speculators invest their initial wealth in bonds and trade in futures contracts. The distinctive feature of the model is that cash flow (and not price) risk drives trades in futures contracts. Consequently, the futures price and the cash position are endogenous. Furthermore, equilibrium prices are derived when both quantity and price risks can be hedged simultaneously. This theoretical framework yields some interesting insights. First, the net position in futures contracts depends on the relative volatility of the producers’ cash flows. Producers with cash flow uncertainty, which are resolved less rapidly than the aggregate, will tend to go short in order to smooth their terminal consumption, or alternatively, will hold futures contracts. This result differs from that obtained in traditional models in which producers sell futures contracts to hedge their non-traded positions against spot price fluctuations. This result is consistent with the casual observation that the distinction between hedgers and speculators is ambiguous, and thus producers can be both on the long and the short sides. Second, changes in the equilibrium futures price depend on wealth and the relative risk process. The futures price dynamics resulting from this model are consistent with empirical evidence (Milonas, 1986) for commodity futures price, where trading is absent. Specifically, the model predicts an inverse relation between volatility of futures price increments and maturity (the Samuelson hypothesis): Volatility increases as time to maturity shortens. An interesting avenue for future research would be to study a similar model in an incomplete market setting. This might account better for the ARCH behaviour reported in studies of futures prices.