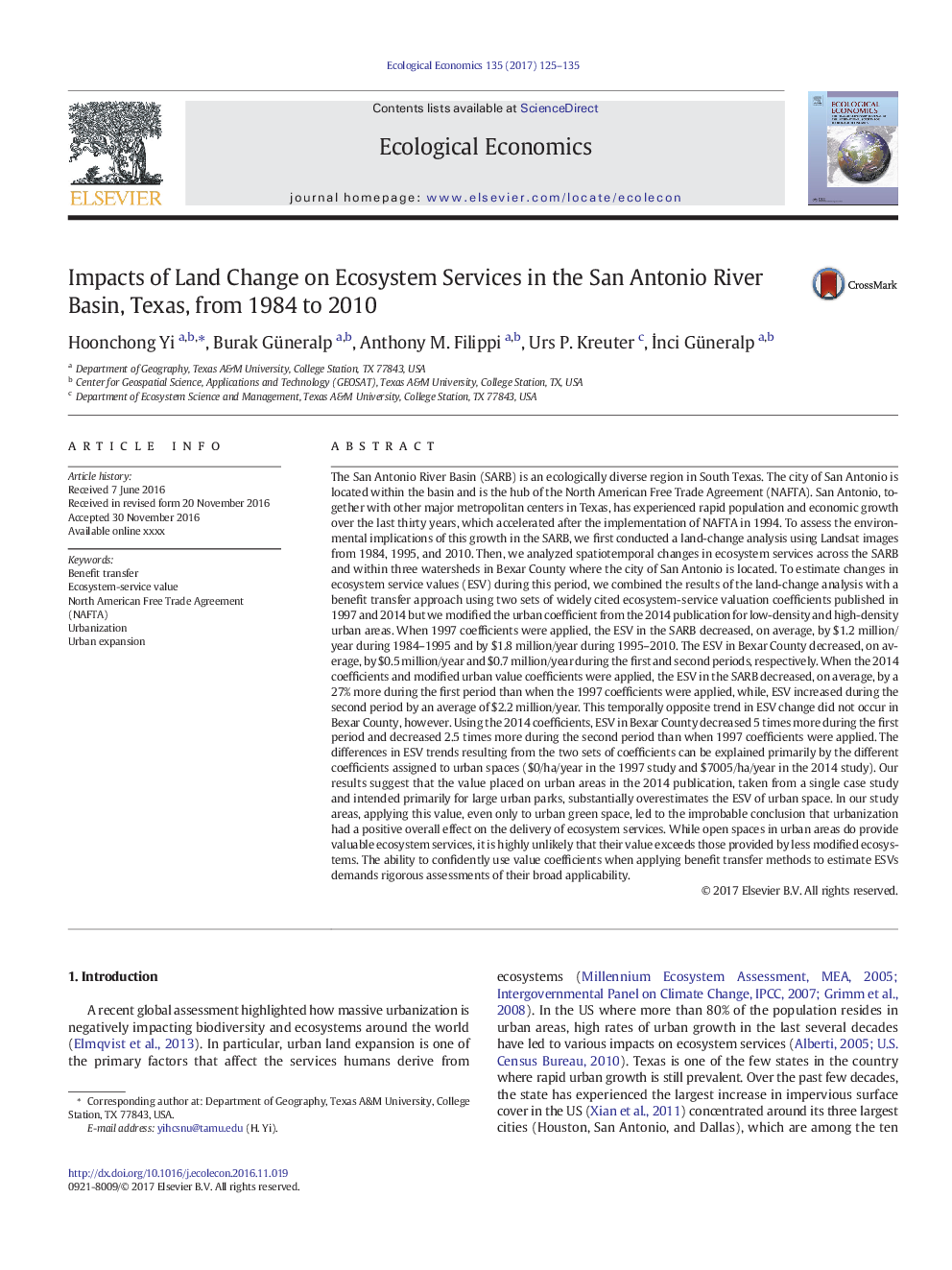 The San Antonio River Basin (SARB) is an ecologically diverse region in South Texas. The city of San Antonio is located within the basin and is the hub of the North American Free Trade Agreement (NAFTA). San Antonio, together with other major metropolitan centers in Texas, has experienced rapid population and economic growth over the last thirty years, which accelerated after the implementation of NAFTA in 1994. To assess the environmental implications of this growth in the SARB, we first conducted a land-change analysis using Landsat images from 1984, 1995, and 2010. Then, we analyzed spatiotemporal changes in ecosystem services across the SARB and within three watersheds in Bexar County where the city of San Antonio is located. To estimate changes in ecosystem service values (ESV) during this period, we combined the results of the land-change analysis with a benefit transfer approach using two sets of widely cited ecosystem-service valuation coefficients published in 1997 and 2014 but we modified the urban coefficient from the 2014 publication for low-density and high-density urban areas. When 1997 coefficients were applied, the ESV in the SARB decreased, on average, by $1.2Â million/year during 1984â1995 and by $1.8Â million/year during 1995â2010. The ESV in Bexar County decreased, on average, by $0.5Â million/year and $0.7Â million/year during the first and second periods, respectively. When the 2014 coefficients and modified urban value coefficients were applied, the ESV in the SARB decreased, on average, by a 27% more during the first period than when the 1997 coefficients were applied, while, ESV increased during the second period by an average of $2.2Â million/year. This temporally opposite trend in ESV change did not occur in Bexar County, however. Using the 2014 coefficients, ESV in Bexar County decreased 5 times more during the first period and decreased 2.5 times more during the second period than when 1997 coefficients were applied. The differences in ESV trends resulting from the two sets of coefficients can be explained primarily by the different coefficients assigned to urban spaces ($0/ha/year in the 1997 study and $7005/ha/year in the 2014 study). Our results suggest that the value placed on urban areas in the 2014 publication, taken from a single case study and intended primarily for large urban parks, substantially overestimates the ESV of urban space. In our study areas, applying this value, even only to urban green space, led to the improbable conclusion that urbanization had a positive overall effect on the delivery of ecosystem services. While open spaces in urban areas do provide valuable ecosystem services, it is highly unlikely that their value exceeds those provided by less modified ecosystems. The ability to confidently use value coefficients when applying benefit transfer methods to estimate ESVs demands rigorous assessments of their broad applicability.