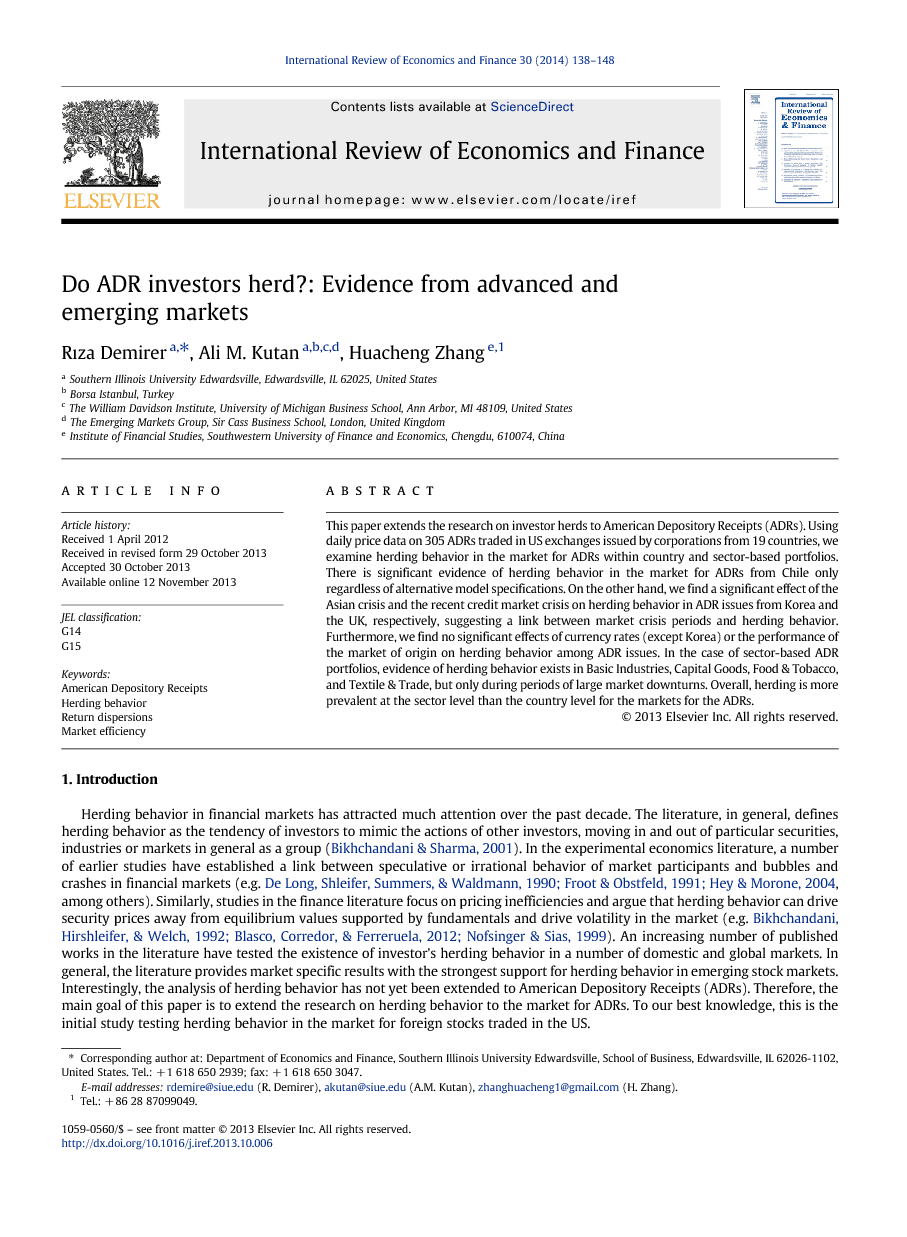 This paper extends the research on investor herds to American Depository Receipts (ADRs). Using daily price data on 305 ADRs traded in US exchanges issued by corporations from 19 countries, we examine herding behavior in the market for ADRs within country and sector-based portfolios. There is significant evidence of herding behavior in the market for ADRs from Chile only regardless of alternative model specifications. On the other hand, we find a significant effect of the Asian crisis and the recent credit market crisis on herding behavior in ADR issues from Korea and the UK, respectively, suggesting a link between market crisis periods and herding behavior. Furthermore, we find no significant effects of currency rates (except Korea) or the performance of the market of origin on herding behavior among ADR issues. In the case of sector-based ADR portfolios, evidence of herding behavior exists in Basic Industries, Capital Goods, Food & Tobacco, and Textile & Trade, but only during periods of large market downturns. Overall, herding is more prevalent at the sector level than the country level for the markets for the ADRs.

This paper extends the research on investor's herding behavior to the market for American Depository Receipts (ADR). We find evidence consistent with herding behavior in the emerging markets for ADRs from Chile and Korea only. Unlike Chiang and Zheng (2010) who focused on the stock markets of 18 advanced and emerging economies, we find no evidence of herd formation among investors of ADRs from developed nations including Australia, France, Germany, Ireland, Italy, Japan, Netherlands, and Switzerland. The only exception to this is the UK where herding behavior is heavily observed during the recent financial crisis period only. Similarly, unlike Tan et al. (2008) who documented evidence of herding behavior in the Chinese markets, we find no evidence supporting such behavior in the market for Chinese ADRs. Given these findings, we conclude that there is not much significant evidence of herding behavior at the country level in the market for ADRs. We also run similar tests after classifying ADRs into different sectors based on their NAICS codes and test whether herding behavior exists within sector-based ADR portfolios. Once again, we find evidence of herding behavior in Basic Industries, Capital Goods, Food & Tobacco, and Textile & Trade during periods of large market losses. The finding of herding behavior during large market downturns is consistent with a number of studies in the literature suggesting asymmetry in utility functions where investors are more concerned about potential gains than potential losses. Overall, the findings suggest that herding is more prevalent at the sector level rather than at the country level and this evidence is consistent with sector level evidence from emerging markets where herding behavior is documented (e.g. Demirer et al., 2010 and Lee et al., 2013). We suggest four avenues for future research. First, we have provided evidence from ADRs traded in the US only. It would be interesting to see whether similar results hold for firms that are cross listed in other major financial centers (i.e., London) or traded in different foreign currencies (i.e. the euro, the British pound, and the Japanese yen). Second, we have found that the performance of the market of origin and shocks in currency rates do not have any significant effect on the cross-sectional dispersion of ADR returns. Therefore, it is possible that ADR portfolios can be augmented by positions in the currency futures or in the home market index in order to enhance risk–return tradeoffs of ADR portfolios. Providing empirical evidence for potential diversification benefits is beyond the scope of this paper, but it could be considered in further studies. Third, potential reasons for differences in herding behavior among different sectors would be an interesting research agenda. Finally, this study has used a well-known herding test in the literature originally offered by Chang et al. (2000) and applied to a number of different markets. Although our additional tests suggest that the findings are robust to alternative specifications, the results may still be sensitive to using other alternative herding tests. Future studies need to apply alternative methods to see whether our findings hold well under different methodologies which test the existence of investor's herding behavior.