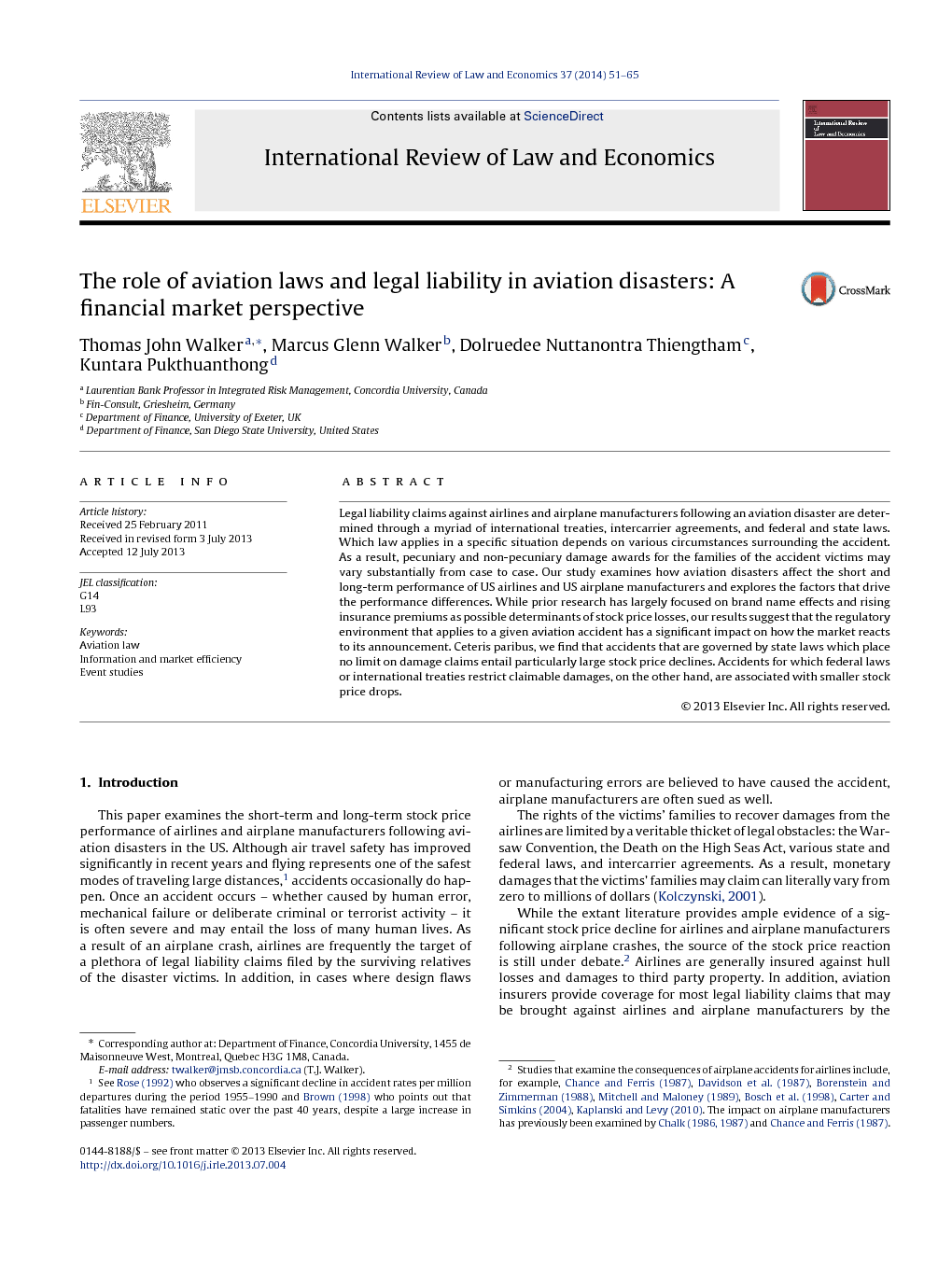 Legal liability claims against airlines and airplane manufacturers following an aviation disaster are determined through a myriad of international treaties, intercarrier agreements, and federal and state laws. Which law applies in a specific situation depends on various circumstances surrounding the accident. As a result, pecuniary and non-pecuniary damage awards for the families of the accident victims may vary substantially from case to case. Our study examines how aviation disasters affect the short and long-term performance of US airlines and US airplane manufacturers and explores the factors that drive the performance differences. While prior research has largely focused on brand name effects and rising insurance premiums as possible determinants of stock price losses, our results suggest that the regulatory environment that applies to a given aviation accident has a significant impact on how the market reacts to its announcement. Ceteris paribus, we find that accidents that are governed by state laws which place no limit on damage claims entail particularly large stock price declines. Accidents for which federal laws or international treaties restrict claimable damages, on the other hand, are associated with smaller stock price drops.

That aviation disasters have a negative impact on the stock performance of airlines comes at no surprise. Why certain types of disasters cause large price declines while others have almost no impact is puzzling, however. We address this question by exploring the driving factors behind an airline's abnormal stock price performance following a disaster in the US We find that anticipated legal liability claims appear to be a significant factor that drives the magnitude of an airline stock's initial price decline. Crashes that result in many fatalities and crashes that occur on domestic flights where airlines face unlimited liability cause particularly large price declines. In addition, airlines are particularly hard hit if the crash is caused by criminal or terrorist activity. While hull losses and legal liability costs are covered by insurance, the affected airline is likely to pay at least part of these costs later in the form of higher insurance premiums. Our results are likely to be transferrable to other countries/regions in which local laws are heterogeneous for different types of aviation accidents or differ substantially from the various international treaties we discuss in our paper. Although the abnormal returns of airplane manufacturers are considerably smaller, we find similar relationships when investigating the factors that drive performance differences. Again, investors’ anticipation of legal liability claims appears to be a major factor that causes performance differences.