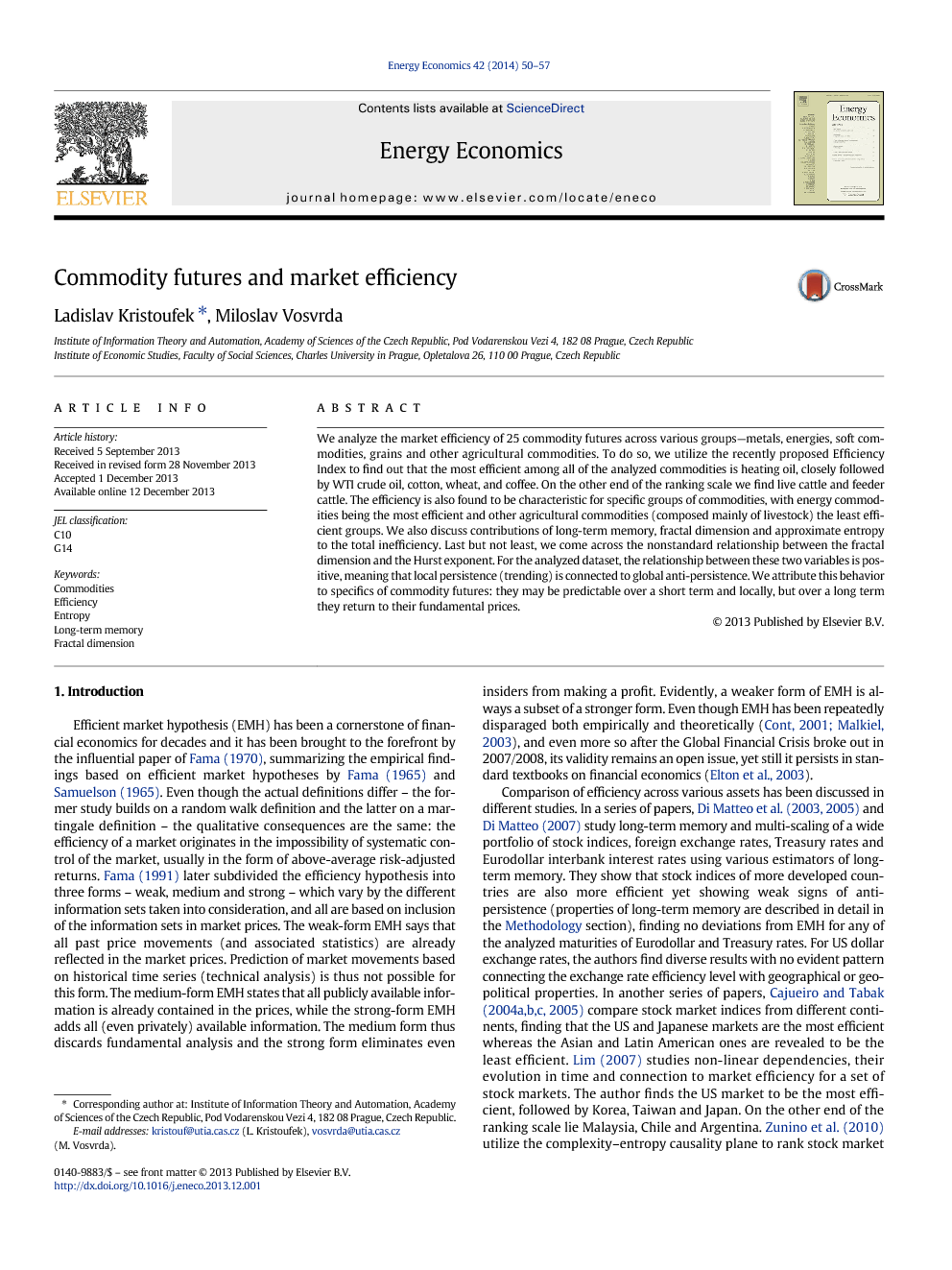 We analyze the market efficiency of 25 commodity futures across various groups—metals, energies, soft commodities, grains and other agricultural commodities. To do so, we utilize the recently proposed Efficiency Index to find out that the most efficient among all of the analyzed commodities is heating oil, closely followed by WTI crude oil, cotton, wheat, and coffee. On the other end of the ranking scale we find live cattle and feeder cattle. The efficiency is also found to be characteristic for specific groups of commodities, with energy commodities being the most efficient and other agricultural commodities (composed mainly of livestock) the least efficient groups. We also discuss contributions of long-term memory, fractal dimension and approximate entropy to the total inefficiency. Last but not least, we come across the nonstandard relationship between the fractal dimension and the Hurst exponent. For the analyzed dataset, the relationship between these two variables is positive, meaning that local persistence (trending) is connected to global anti-persistence. We attribute this behavior to specifics of commodity futures: they may be predictable over a short term and locally, but over a long term they return to their fundamental prices.

Efficient market hypothesis (EMH) has been a cornerstone of financial economics for decades and it has been brought to the forefront by the influential paper of Fama (1970), summarizing the empirical findings based on efficient market hypotheses by Fama (1965) and Samuelson (1965). Even though the actual definitions differ – the former study builds on a random walk definition and the latter on a martingale definition – the qualitative consequences are the same: the efficiency of a market originates in the impossibility of systematic control of the market, usually in the form of above-average risk-adjusted returns. Fama (1991) later subdivided the efficiency hypothesis into three forms – weak, medium and strong – which vary by the different information sets taken into consideration, and all are based on inclusion of the information sets in market prices. The weak-form EMH says that all past price movements (and associated statistics) are already reflected in the market prices. Prediction of market movements based on historical time series (technical analysis) is thus not possible for this form. The medium-form EMH states that all publicly available information is already contained in the prices, while the strong-form EMH adds all (even privately) available information. The medium form thus discards fundamental analysis and the strong form eliminates even insiders from making a profit. Evidently, a weaker form of EMH is always a subset of a stronger form. Even though EMH has been repeatedly disparaged both empirically and theoretically (Cont, 2001 and Malkiel, 2003), and even more so after the Global Financial Crisis broke out in 2007/2008, its validity remains an open issue, yet still it persists in standard textbooks on financial economics (Elton et al., 2003). Comparison of efficiency across various assets has been discussed in different studies. In a series of papers, Di Matteo et al., 2003 and Di Matteo et al., 2005 and Di Matteo (2007) study long-term memory and multi-scaling of a wide portfolio of stock indices, foreign exchange rates, Treasury rates and Eurodollar interbank interest rates using various estimators of long-term memory. They show that stock indices of more developed countries are also more efficient yet showing weak signs of anti-persistence (properties of long-term memory are described in detail in the Methodology section), finding no deviations from EMH for any of the analyzed maturities of Eurodollar and Treasury rates. For US dollar exchange rates, the authors find diverse results with no evident pattern connecting the exchange rate efficiency level with geographical or geopolitical properties. In another series of papers, Cajueiro and Tabak, 2004a, Cajueiro and Tabak, 2004b, Cajueiro and Tabak, 2004c and Cajueiro and Tabak, 2005 compare stock market indices from different continents, finding that the US and Japanese markets are the most efficient whereas the Asian and Latin American ones are revealed to be the least efficient. Lim (2007) studies non-linear dependencies, their evolution in time and connection to market efficiency for a set of stock markets. The author finds the US market to be the most efficient, followed by Korea, Taiwan and Japan. On the other end of the ranking scale lie Malaysia, Chile and Argentina. Zunino et al. (2010) utilize the complexity–entropy causality plane to rank stock market indices to show that the emerging markets are less efficient than the developed ones, as one would expect. The difference is attributed to a lower entropy value and a higher complexity of the emergent markets. Kristoufek and Vosvrda (2013) introduce the Efficiency Index and come up with a ranking of stock market indices, finding that the most efficient markets are located in Western Europe, USA and Japan, whereas the least efficient markets are situated in Latin America and Asia. However, to the best of our knowledge, proper attention has not been given to a comparison of the efficiency of commodity markets. In this paper, we analyze futures markets for a wide range of commodities – energy, metals, and various agricultural commodities – and compare their efficiency using the Efficiency Index proposed by Kristoufek and Vosvrda (2013). The paper is structured as follows. Section 2 covers literature dealing with the efficiency of commodities. Section 3 describes the methodology in detail. Section 4 describes the analyzed dataset and gives the results. Section 5 is the conclusion. We show that efficiency is related to a type of commodity (energy commodities being the most efficient and other agricultural commodities being the least efficient). In addition, we find a nonstandard relationship between the local and global properties of the series: most of the series show local persistence, yet they are globally mean-reverting. The series thus follow quite strong local trends but over a long term, they return to their fundamental value.

We have analyzed the market efficiency of 25 commodity futures across various groups—metals, energies, soft commodities, grains, and other agricultural commodities. To do so, we have utilized the recently proposed Efficiency Index to find that the most efficient of all the analyzed commodities is heating oil, closely followed by WTI crude oil, cotton, wheat and coffee. On the other (least efficient) end of the ranking scale, we have detected live cattle and feeder cattle. The efficiency also seems to be characteristic for specific groups of commodities—energy commodities have been found the most efficient, followed by soft commodities, grains, and metals, whereas the other agricultural commodities (formed mainly of livestock) form the least efficient group. Apart from that, we have also discussed the contributions of the long-term memory, fractal dimension and approximate entropy to the total inefficiency. We have discovered that the contribution is type-dependent as well, even though the regularities are not strongly pronounced. Last but not least, we have come across the nonstandard relationship between the fractal dimension and the Hurst exponent. For the analyzed dataset, the relationship between these two is positive, meaning that local persistence (trending) is connected to global anti-persistence. We attribute this to specifics of commodity futures which might be predictable over a short term and locally, but over a long term they return to their fundamental price, which differs from the results found for stock indices (Kristoufek and Vosvrda, 2013).