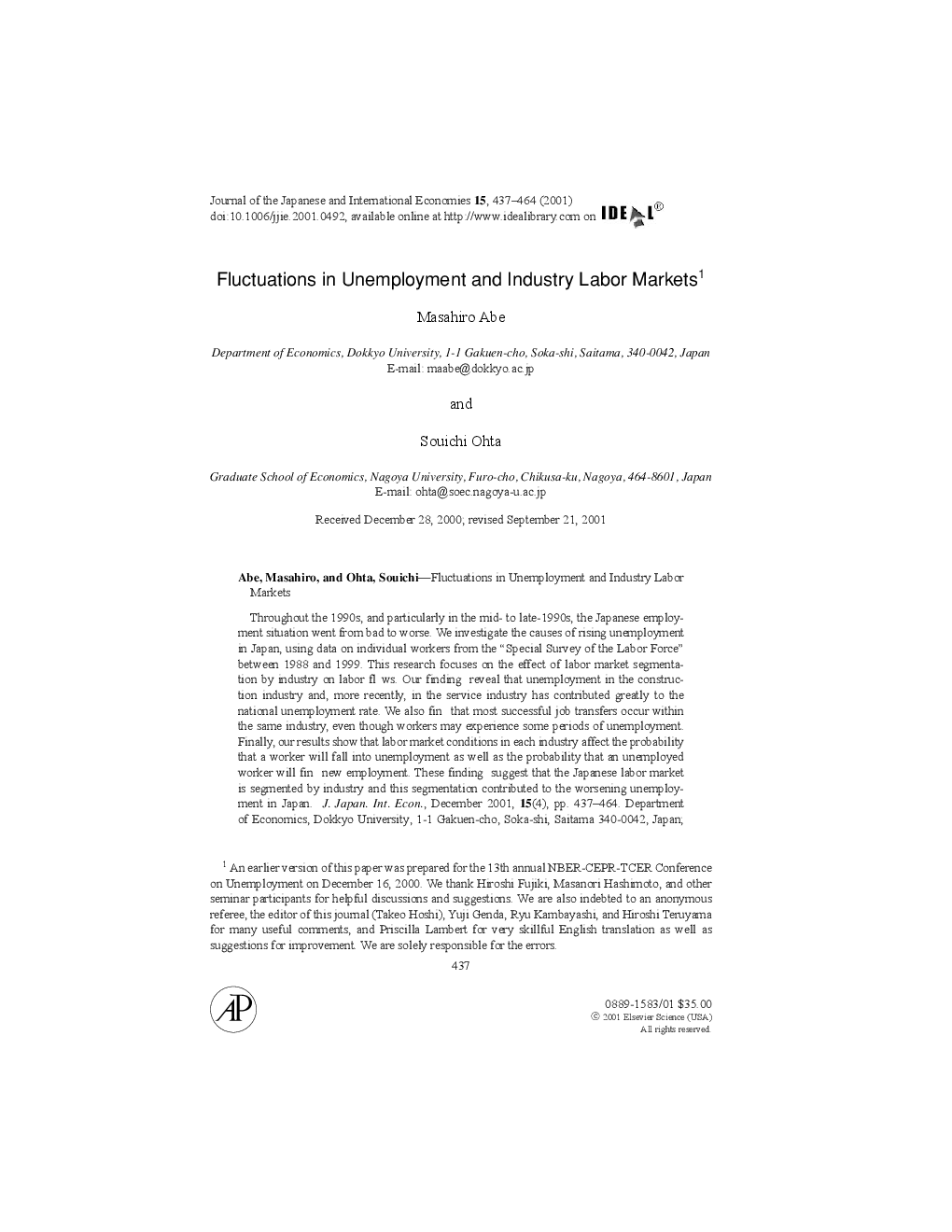 Throughout the 1990s, and particularly in the mid- to late-1990s, the Japanese employment situation went from bad to worse. We investigate the causes of rising unemployment in Japan, using data on individual workers from the “Special Survey of the Labor Force” between 1988 and 1999. This research focuses on the effect of labor market segmentation by industry on labor flows. Our findings reveal that unemployment in the construction industry and, more recently, in the service industry has contributed greatly to the national unemployment rate. We also find that most successful job transfers occur within the same industry, even though workers may experience some periods of unemployment. Finally, our results show that labor market conditions in each industry affect the probability that a worker will fall into unemployment as well as the probability that an unemployed worker will find new employment. These findings suggest that the Japanese labor market is segmented by industry and this segmentation contributed to the worsening unemployment in Japan. J. Japan. Int. Econ., December 2001, 15(4), pp. 437–464. Department of Economics, Dokkyo University, 1-1 Gakuen-cho, Soka-shi, Saitama 340-0042, Japan; Graduate School of Economics, Nagoya University, Furo-cho, Chikusa-ku, Nagoya, 464-8601, Japan. © 2001 Elsevier Science (USA).

What explains the sudden rise in unemployment in Japan in the mid- to late- 1990s? Until now, the dominant view of the Japanese labor market was that the unemployment rate remained low because Japan was blessed with an extremely flexible labor market resistant to occasional shocks.2 Specific examples and studies of this flexibility include the annual spring wage offensive (shunto) when wage negotiations take place, the elasticity of wages through the bonus system, cooperative enterprise-level unions, the dual labor market with a secondary sector in which wages are determined competitively, mechanisms that kept unemployment from actually appearing such as transfers to other firms and offices, and the discouraged worker effect on female labor force participation in times of low labor demand. In all these cases, most labor economists began with the assumption that the Japanese labor market is very flexible and their research centered on discovering why the market was so flexible. In fact, faith in the Japanese labor market was particularly high during the 1980s. But then the bubble burst and the Japanese employment situation suddenly took a turn for the worse. In 1990, the total unemployment rate was only 2.1%, but by 1995 it had increased to 3.1%, by 1998 it was 4.1%, and it reached a high of 4.9% in February and March in 2000. That is to say, the second half of the 1990s was characterized by a sharp rise in the unemployment rate. Furthermore, the number of people in the labor force, which had been increasing annually, began to decrease in 1998. The deteriorating Japanese employment situation prompted labor economists to investigate the reasons why the Japanese labor market had lost its flexibility and to re-examine the causes of unemployment. Teruyama and Toda (1997), for example, argued that both macro and allocative shocks are sources of unemployment fluctuation in Japan. They also suggested that the recent rise in unemployment might not be a temporary phenomenon. Using a disequilibrium model, Tsukuda and Miyakoshi (1999) argued that the Japanese labor market has been caught in a Keynesian regime of surplus labor supply and a surplus in the commodity goods market. Some of the factors that contributed to the unfavorable employment situation were the curtailment of public investment and the subsequent recession in the construction industry, and stagnation in small and medium-size firms resulting from the credit crunch and financial instability. Using a VAR model of the relationship between total unemployment and sectoral employment, Ohta and Genda (1999) showed that a decrease in employment in self-employed, small and medium, construction, and manufacturing firms is very likely to be directly linked to unemployment. On the basis of this finding, and the 1998 fall in employment in construction, manufacturing, and in small and medium firms, they reasoned that this fall in employment in these industrieswas related to the sharp rise in national unemployment. This suggests that the attributes of the labor market, such as industry and firm size, matter. However, Ohta and Genda’s analysis is based upon rather primitive stock data. Using flow data, it is now possible to get more detailed information such as the risk of unemployment a worker actually faces in each sector and whether the probability that an unemployed person finds a job differs according to the sector they worked in previously. In this paper, we use individual data on male workers published in a Management and Coordination Agency survey entitled, “Special Survey of the Labor Force” (SSLF), over the 12 years from 1988 to 1999 to discover the causes of rising unemployment in Japan. The survey asks about both past and present employment; thus we can trace the labor flow of workers from one employment situation to another. This enables us to calculate various aspects of labor flowprobabilities, which are the primary determinants of the fluctuation in unemployment.3 This paper draws upon Ohta and Genda’s research and focuses on how labor market differences at the industry level affect unemployment. It is unlikely that the economic recession has affected all industries uniformly. Rather, industries that have suffered the greatest declines and discharged the greatest number of workers most likely played a larger role in unemployment fluctuations—particularly those industries that require a high degree of specialized skills. In these industries, most of the discharged employees will have greater difficulty finding work in another industry and remain unemployed. The purpose of this paper is to analyze the Japanese unemployment problem by paying particular attention to labor market differentiation by industry. First, we examine the employment situation in Japan during the 1990s by looking at data on labor market flows. We test to see whether the recent rise in unemployment is due to an increase in unemployment inflow (workers entering unemployment) or due to a lower rate of unemployment outflow (unemployed workers leaving unemployment). Next, we disaggregate unemployment and attempt to discover which industry contributed the most to the rise in unemployment. We find that some industrial sectors have contributed more to fluctuations in aggregate unemployment than others. Third, we analyze the movement of workers across industries and the relationship to sectoral unemployment. Finally, we test whether labor market segmentation by industry affects the probability a worker will fall into unemployment and an unemployed worker will find new employment.

This paper examined the industry-level causes of fluctuations in Japanese unemployment in the 1990s. Our analysis revealed that unemployment in the construction industry contributed greatly to the worsening unemployment rate. More recently, unemployment in the service sector has become a major factor contributing to unemployment. Our analysis also showed that the bulk of job turnovers occur within industries, even though workers may experience some periods of unemployment. Third, labor market conditions in each industry affect the probability that a worker will fall into unemployment and find a new job. These findings suggest that the Japanese labor market is segmented by industry, and this segmentation contributed to the deteriorating employment conditions in Japan. There are, however, several points we could not fully address in this paper. In particular, the source of segmentation could not be discerned from our analysis. But this is clearly an important part of labor market policy. Recently, Japan has begun to deregulate the labor market in response to arguments that the labor market needs to be more flexible and that something must be done to encourage the efficient reallocation of labor. However, if industry-specific human capital is the main source of labor market segmentation, providing workers with the training needed to acquire industry-specific skills is a desirable policy. On the other hand, if the segmentation is due mainly to some institutional factors or industry-level differences in skills and ability, then other labor market policies are called for. Discovering the source of segmentation is a topic for future research.