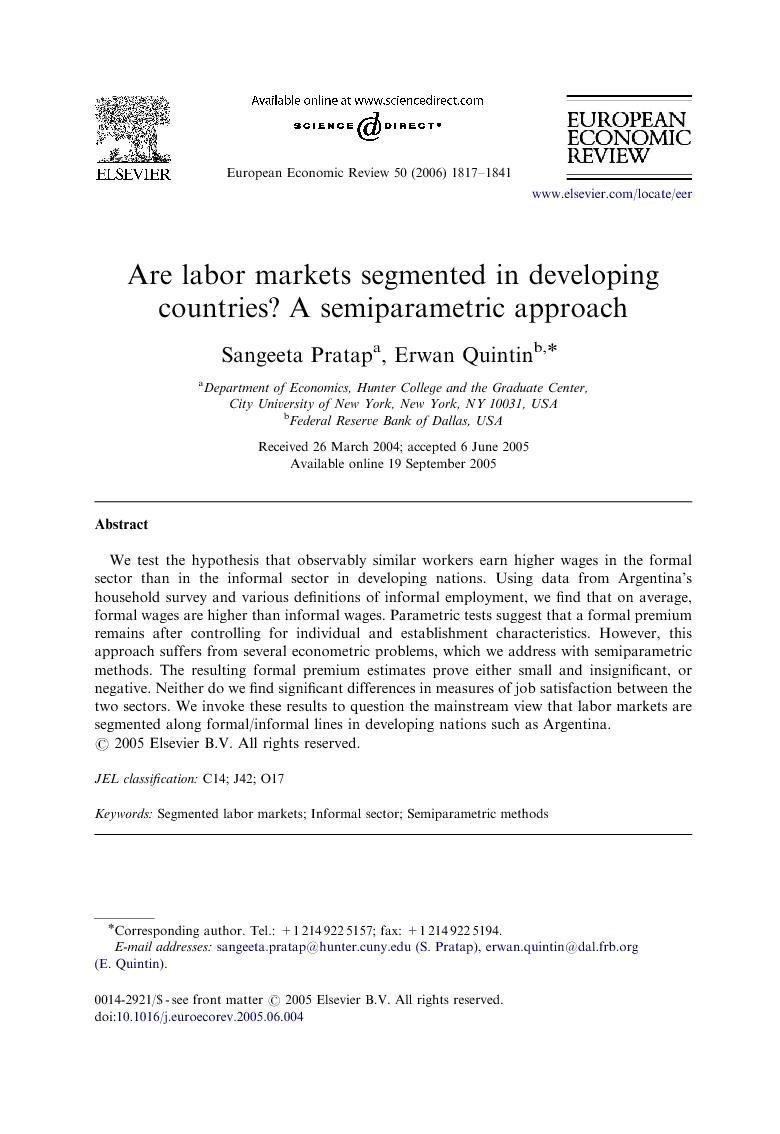 We test the hypothesis that observably similar workers earn higher wages in the formal sector than in the informal sector in developing nations. Using data from Argentina's household survey and various definitions of informal employment, we find that on average, formal wages are higher than informal wages. Parametric tests suggest that a formal premium remains after controlling for individual and establishment characteristics. However, this approach suffers from several econometric problems, which we address with semiparametric methods. The resulting formal premium estimates prove either small and insignificant, or negative. Neither do we find significant differences in measures of job satisfaction between the two sectors. We invoke these results to question the mainstream view that labor markets are segmented along formal/informal lines in developing nations such as Argentina.

Dualistic models of labor markets have pervaded the economic development literature since the seminal work of Lewis (1954). According to the dualistic view, some workers do not have access to jobs in the regulated, formal sector. These workers are forced to accept informal sector jobs characterized by inferior earnings and working conditions (see for example, Mazumdar, 1975). In other words, most existing models of informal economic activities assume that labor markets are segmented along formal/informal lines. For instance, in Fields’ (1975) extension of the Harris and Todaro (1970) model, agents employed in the informal sector split their time between working and searching for higher paying formal jobs. Rauch (1991) describes a general equilibrium model where firms can violate the minimum wage requirement provided that they operate on a scale smaller than a given detection threshold. In his model, formal jobs are rationed and some workers must accept lower paying informal jobs. Fortin et al. (1997) use Rauch's framework to evaluate the quantitative effect of various public policies on the size and characteristics of the informal sector. A central prediction of models with segmented labor markets is that some earning-relevant characteristics are better rewarded in the formal sector than in the informal sector. Should such characteristics fail to exist, barriers to entry into the formal sector would not be economically relevant. In this paper, we use a variety of parametric and semiparametric techniques to test this prediction with data from Argentina's permanent household survey. In our analysis, we consider workers formally employed if they receive the benefits mandated by Argentina's labor laws. Our main results are as follows: As most studies, we find that on average, formal workers earn more than informal workers. Standard wage regressions suggest that this premium remains even after controlling for differences in observed characteristics of individuals and employers. However, estimators based on propensity score matching give us the opposite result. Once we match formal sector workers with informal sector workers with similar propensity scores, the formal sector premium disappears. This holds for our overall sample, for a variety of sample splits, and for a variety of matching techniques. In fact, we find that in many subsamples, informal workers earn more than their formal counterparts. Finally, we find that controlling for establishment size is important. When size variables are dropped from the specification of propensity scores, the resulting matching estimators of the formal sector premium become significantly positive. This is not surprising since larger establishments pay higher wages in Argentina, as in most countries, including countries where the informal sector is small. (See Oi and Idson, 1999 for a review of the size-wage premium literature.) In contrast to our results, most existing studies of labor markets in developing countries find that some earning-relevant characteristics are better rewarded in the formal sector than in the informal sector (see, for example, Mazumdar, 1981, Heckman and Hotz, 1986, Roberts, 1989, Pradhan and Van Soest, 1995, Tansel, 1999 and Gong and Van Soest, 2001). We reach a different conclusion for at least two reasons. First, all previous studies of which we know rely exclusively on parametric techniques. Parametric rejections of the hypothesis that earning functions are the same across sectors could owe to misspecification, especially since the distribution of worker and job characteristics differs greatly across sectors. Semiparametric methods require no assumption on the form of earning functions, and limit wage comparisons to observably similar workers. Second, several of these studies use establishment size as the criterion in their definition of formal sector employment. Since large establishments tend to emphasize formal sector jobs, the reported premium may be no more than a standard size wage premium. While our results improve upon the existing literature, our analysis shares some of its potential shortcomings. Most importantly, while we condition on a large variety of observed characteristics, we are not able to fully control for the potential effect of unobserved productivity attributes. We exploit the panel structure of our data to produce difference-in-difference estimates of the formal sector premium. These estimates control for unobserved but fixed earning determinants, and confirm our other findings. A second standard criticism of our type of analysis is that wages are but one dimension of job satisfaction. There may be other dimensions along which jobs in the formal sector differ from those in the informal sector. Our data allow us to address this potential problem only partially. The household survey contains two questions that are related to job quality: whether the respondent is looking for a job other than the one they currently have, and whether the respondent would like to work more hours. For both questions, we find no significant difference in responses across sector. Our results significantly weaken the empirical case for the notion that segmentation is an important feature of labor markets in developing countries. The standard empirical test of dualistic models asks whether earning functions differ across sectors. As mentioned earlier, Heckman and Hotz (1986) point out that this test is not convincing: earning functions could differ for a variety of reasons.1 We go further: the typical finding that models with segmented market pass this weak test is fragile. In other words, there is little empirical support for the central prediction of dualistic models. This suggests to us that modeling the informal sector as the disadvantaged end of dualistic labor markets is likely to lead to misguided policy prescriptions.

We find no evidence of a formal sector wage premium in Buenos Aires and its suburbs with data from the Permanent Household Survey for the 1993–1995 time period.While wages are higher on average in the formal sector, this apparent premium disappears after controlling semiparametrically for individual and employer characteristics. In fact, we find that groups often thought to be queuing for formal sector jobs such as young and uneducated workers would expect lower wages in the formal sector. Furthermore, proxies for job satisfaction available in our data do not suggest that informal workers are relatively more dissatisfied with their jobs. Our results confirm that parametric tests of the dual labor market hypothesis can yield misleading results. We also find that controlling for establishment characteristics, particularly size, is important. In both sectors, large establishments pay more in Argentina, as they do in most countries.We interpret this finding as suggesting that much of the formal sector premium previous studies report is in fact a standard size-wage premium. There remains to explain why the distribution of age, gender and education characteristics differs so much across sectors in a context where labor markets appear to be competitive. There are many potential explanations. To cite but one, firms that operate informally tend to operate at a lower capital to labor ratio than formal firms, in part because they have limited access to outside sources of finance (see Thomas, 1992, for a discussion). To the extent that unskilled labor is a better substitute for physical capital than skilled labor, the informal sector will tend to emphasize unskilled labor, regardless of whether labor markets are segmented. (This explanation is formalized by Amaral and Quintin, 2005.) In other words, segmentation arguments are not necessary to account for salient features of labor markets in developing nations. Since these arguments do not appear to be founded on strong empirical evidence, their prevalence in the development literature is surprising.