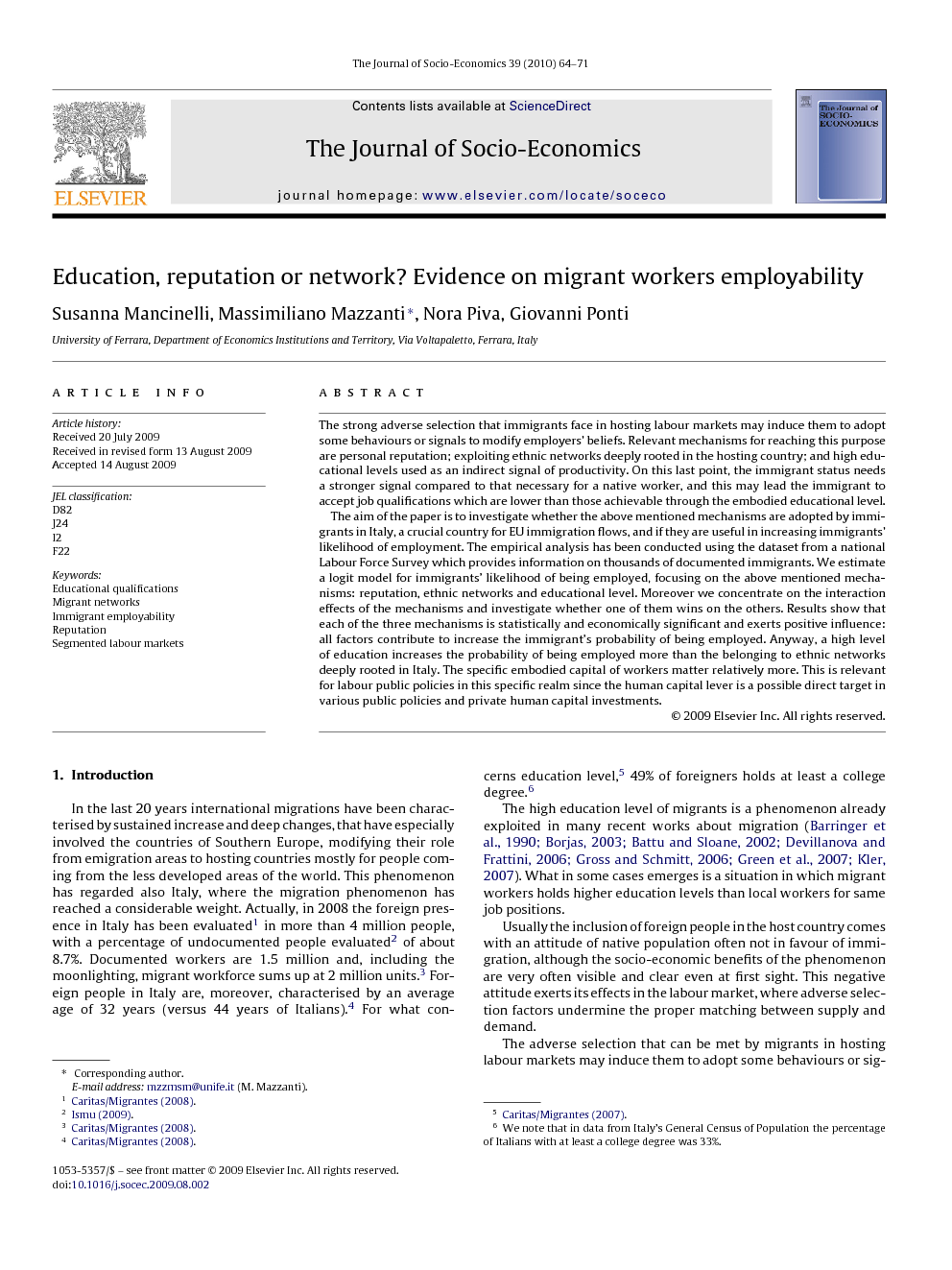 The strong adverse selection that immigrants face in hosting labour markets may induce them to adopt some behaviours or signals to modify employers’ beliefs. Relevant mechanisms for reaching this purpose are personal reputation; exploiting ethnic networks deeply rooted in the hosting country; and high educational levels used as an indirect signal of productivity. On this last point, the immigrant status needs a stronger signal compared to that necessary for a native worker, and this may lead the immigrant to accept job qualifications which are lower than those achievable through the embodied educational level. The aim of the paper is to investigate whether the above mentioned mechanisms are adopted by immigrants in Italy, a crucial country for EU immigration flows, and if they are useful in increasing immigrants’ likelihood of employment. The empirical analysis has been conducted using the dataset from a national Labour Force Survey which provides information on thousands of documented immigrants. We estimate a logit model for immigrants’ likelihood of being employed, focusing on the above mentioned mechanisms: reputation, ethnic networks and educational level. Moreover we concentrate on the interaction effects of the mechanisms and investigate whether one of them wins on the others. Results show that each of the three mechanisms is statistically and economically significant and exerts positive influence: all factors contribute to increase the immigrant's probability of being employed. Anyway, a high level of education increases the probability of being employed more than the belonging to ethnic networks deeply rooted in Italy. The specific embodied capital of workers matter relatively more. This is relevant for labour public policies in this specific realm since the human capital lever is a possible direct target in various public policies and private human capital investments.

In the last 20 years international migrations have been characterised by sustained increase and deep changes, that have especially involved the countries of Southern Europe, modifying their role from emigration areas to hosting countries mostly for people coming from the less developed areas of the world. This phenomenon has regarded also Italy, where the migration phenomenon has reached a considerable weight. Actually, in 2008 the foreign presence in Italy has been evaluated1 in more than 4 million people, with a percentage of undocumented people evaluated2 of about 8.7%. Documented workers are 1.5 million and, including the moonlighting, migrant workforce sums up at 2 million units.3 Foreign people in Italy are, moreover, characterised by an average age of 32 years (versus 44 years of Italians).4 For what concerns education level,5 49% of foreigners holds at least a college degree.6 The high education level of migrants is a phenomenon already exploited in many recent works about migration (Barringer et al., 1990, Borjas, 2003, Battu and Sloane, 2002, Devillanova and Frattini, 2006, Gross and Schmitt, 2006, Green et al., 2007 and Kler, 2007). What in some cases emerges is a situation in which migrant workers holds higher education levels than local workers for same job positions. Usually the inclusion of foreign people in the host country comes with an attitude of native population often not in favour of immigration, although the socio-economic benefits of the phenomenon are very often visible and clear even at first sight. This negative attitude exerts its effects in the labour market, where adverse selection factors undermine the proper matching between supply and demand. The adverse selection that can be met by migrants in hosting labour markets may induce them to adopt some behaviours or signals to modify employers’ beliefs. Relevant mechanisms at reaching this purpose are: personal reputation, belonging to ethnic networks deeply rooted in the hosting country, and high education levels as an indirect signal of productivity. On this last point, the immigrant status needs a “stronger” signal than that necessary for a local worker, and this may lead the immigrant to accept lower job positions. The main aim of the paper is to investigate whether the mentioned mechanisms are adopted by immigrants in Italy, and if they are useful levers in increasing migrants’ likelihood of employment. The empirical analysis has been conducted using an official dataset provided by the National Institute of Statistics (ISTAT), collecting information about 6860 documented immigrants in Italy. We estimate a logit model for immigrants’ likelihood of being employed, focusing on the above mentioned mechanisms: reputation, ethnic networks and education level. Moreover we concentrate on the interaction effects and the marginal effects of the mechanisms and investigate whether one of them wins on the others. The paper is organized as follows. Section 2 is devoted to the conceptual framework that will constitute the basis for the empirical analysis. In Section 3 the database and the social context are presented. Section 4 comments on and presents the empirical framework, focusing on the drivers of employability for migrants in our sample and on the interaction effects and marginal effects of reputation, migrant networks and education level as levers of migrants’ employability. The last section concludes the paper by summarising results and offering some insights for policy making.

The analysis underlines very important results regarding the adoption and effectiveness of mechanisms adopted by immigrants in Italy in order to modify employer’s beliefs and then their employability. First, it emerges that all factors workers may use as strategic assets in the labour market – reputation, migrant networks and education level – positively influence the probability of being employed. We may infer that such factors in some cases could play as alternative drivers. In fact, we observe that for a part of workers high reputation and network migrants factors compensate the low education levels in driving employability (e.g. Philippines), for others such factors are not able to fully compensate for disadvantages linked to education and even ‘cultural differences’ (Tunisia and Morocco). In other cases (Eastern EU migrants), high education levels compensate lower networking and insomespecific cases (Romanians) decreasing reputation status. Thus, different migrants may be able to exploit different strategic mechanisms as signals to the labour market and as levers of employability. Focusing the attention on the three key drivers of employability and interaction effects, it nevertheless does not appear they exclude each other systematically, insofar their combined effects increase the likelihood of being employed. It remains true that the joint effect is lower in its ‘economic size’ as a phenomenon if compared to the two single effects taken separately, and this is true for all three couples examined regarding reputation, migrant networks and education level. The investigation of marginal effects jointly with the analysis of differences shows that the only meaningful difference is between education and migrant networking. Education level, in the end, plays a major role compared to the still relevant effect of community membership. These results could present a benefit for such migrants (e.g. eastern EU workers) associated to higher education level and somewhat lower reputation and weaker community links, depending on the one hand on high effective and perceived crime rates associated to some eastern EU communities and on the other hand on their historically ‘younger’ experience in the Italian labour market. In fact, the eastern EU immigration began after the collapse of the soviet world and intensified since the late nineties. The migrant networking effect may well improve over time, enhancing its employment relevance, which is now greater for historically old communities, such as Philippines, Tunisia and Morocco among others, which nevertheless suffer from lower education levels. Over a dynamic scenario, such elements of reasoning could also provide food for thought for policy making. In fact, we may expect a relatively increasing stronger weight in the labour market on the side of eastern EU workers, who have also increased more in recent years in terms of size of the population. Weakness could one day emerge for other communities that rely on reputation as the only strategic asset, if eastern EU people strengthen their networking, eventually improve their reputation, and if other communities do not invest in human capital, instead of only using reputation effects as performance drivers. Training, education and labour markets policies should focus on enhancing human capital for relatively weaker migrants in this realm, while other public policies may focus on crime rates and the lower reputation other migrants suffer from. Public policies tackling market failures could be a part of the solution towards increased employability and more coherent matching between education level and jobs. This latter point – the mismatch – is an ancillary but relevant objective of labour policies and it generates high social costs. In the case of migrants, the perpetuating absence of a proper matching between education level and job position could discourage educated people to migrate to Italy, especially when migrant communities increase their stability and their migrant networks in the country. In this case, as the theory of statistical discrimination predicts “it is indeed very easy to say how social segregation can give rise to labour market segregation through network referrals” (Arrow, 1998, p.97). In the presence of such a human capital waste, the risk for the Italian job market is that of losing high educated migrant workers and of perpetuating a situation in which migrants will be employed just in low occupational levels. The present (actual) supply of highly educated migrants in the Italian job market is a chance that deserves much more consideration by policy makers. Given the migrants have explained and will explain a large part of employment performances of Italy and other EU countries, and labour supply is mainly increasing due to migrants and women entering the labour market, the social cost of lower employability and mismatching are to be mitigated as much as possible.