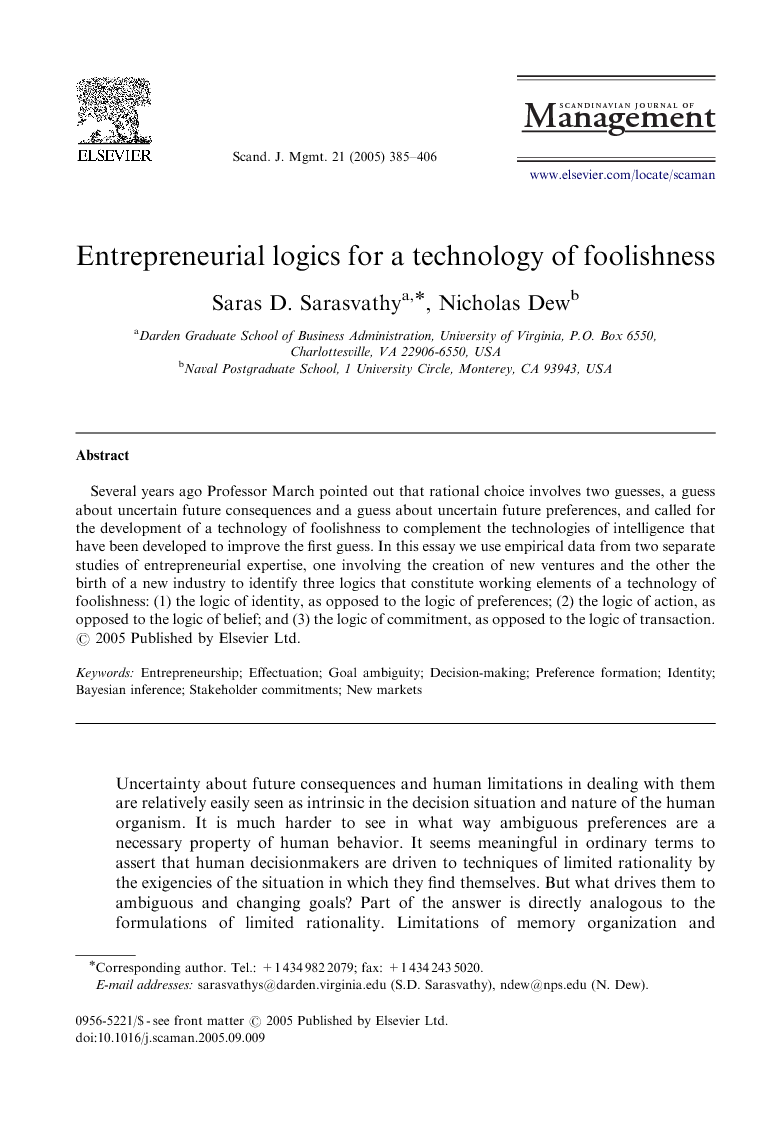 This essay is directly inspired by Professor March's written work and conversations with him. It is also empirically grounded in two separate studies of entrepreneurial expertise, one involving the creation of new ventures (Sarasvathy, 1998) and the other the birth of a new market (Dew, 2003). Entrepreneurs emerge as Simonian decisionmakers (i.e., they are boundedly rational and docile) who living in a Marchian world of goal ambiguity where predictive knowledge and even learning are usually not harbingers of positive outcomes. In such a universe, choices are engineered through a technology of foolishness to produce valuable surprises embodied in novel organizations and new markets. In his paper “Bounded rationality, ambiguity, and the engineering of choice” March wrote: Rational choice involves two guesses, a guess about uncertain future consequences and a guess about uncertain future preferences (1978, p. 587). He then pointed out that while the former had been studied extensively and resulted in the development of a technology of intelligence, the latter might require the development of a technology of foolishness, a task not yet undertaken seriously by scholars of human decision-making. We are not quite sure why this is so, but we suspect one reason could be that most decisionmakers are studied in settings such as corporations, where they have a strong incentive not to use technologies of foolishness, or at least to appear to be using well-worn tools of intelligence. As scholars of entrepreneurship, however, we were more fortunate. Entrepreneurial expertise offers us, as the Galapagos Archipelago did for Darwin, an exceptional setting for understanding how human beings act in the face of mounting uncertainties and lurking ambiguities. Our aim in this paper is to put some legs under March's evocative conceptualization of the technology of foolishness, and maybe even to bring to the table a whiff of its relationship to literature and philosophy. Our empirical investigations of entrepreneurial expertise in the creation of new firms and markets suggest that entrepreneurs are as likely to be drawn from, and driven by, poets and philosophers as any other group of human beings. Be it a potter partnering with a philosopher in the 18th century to create one of the longest enduring brands (Wedgwood Pottery), or a group of yuppies inspired by Moby Dick founding one of the most successful brands of the twentieth century (Starbucks), entrepreneurs routinely straddle economic and so-called “non-economic” spheres in creating new products and services, and new markets for them. Generally speaking it could be argued that before there are products, there is human imagination; and before there is a market, there are human aspirations. Successful entrepreneurs have long been creating firms, industries and even economies by matching up the offspring of human imagination with human aspirations. Yet, a detailed look at the way entrepreneurs actually arrive at these new products and markets shows that they often act without clear goals and without assumptions of unambiguous preferences in the stakeholders they interact with. In fact, we will argue that the existence of ambiguous and even conflicting preferences is necessary for the successful creation of entrepreneurial novelty. And the entrepreneurial process often embodies a technology for dealing with this second guess of rational choice, demystifying it and making it more tractable in the spirit of engineering so favored by March (1978, p. 602): Choice theorists have often discussed complications in the usual abstract representation of tastes. But those concerns have had little impact on ideas about the engineering of choice, perhaps because they pose the problems at a level of philosophic complexity that is remote from decision engineering. Thus, although I think the challenges that ambiguity makes to our models of choice are rather fundamental, my engineering instincts are to sacrifice purity to secure tractability. I suspect we should ask the engineers of choice not initially to reconstruct a philosophy of tastes but to reexamine, within a familiar framework, some presumptions of our craft, and to try to make the use of ambiguity somewhat less of a mystery, somewhat more of a technology. In particular, our data shows that a technology of foolishness operates through at least three logics employed by entrepreneurs in the production of new value. The three logics are: (1) the logic of identity, as opposed to the logic of preferences; (2) the logic of action, as opposed to the logic of belief; and (3) the logic of commitment (focusing on stakeholders and value-creation), as opposed to the logic of transaction (focusing on resources and value-distribution). Each logic suggests complementary decision criteria that use identity (who you are), knowledge (what you know), and networks (whom you know) in unusual ways, providing alternatives to strong predictions of, or strong preferences for, particular consequences. In the following pages, we will describe these three logics that we have labeled effectual, and contrast them with more familiar causal logics that have served us well as decision criteria in fabricating technologies of intelligence. We hope to show that when these alternative logics drive actions in an entrepreneurial setting, there is no need to “reconstruct a philosophy of tastes” (see the quotation above) nor, indeed, to take them as mysterious exogenous given in our theorizing. What emerges is a process of partial construction of preferences that is embodied in the very origins of economic artifacts.

In his seminal ‘‘Fact, Fiction and Forecast,’’ the philosopher Nelson Goodman (1983, p. 57) concludes, ‘‘We have come to think of the actual as one among many possible worlds. We need to repaint that picture. All possible worlds lie within the actual one.’’ Fact and forecast continue to dominate the landscape of decision theory in business and economics today. As March (1994) explicates and summarizes it, our current decision logics are overwhelmingly fueled either by ‘‘consequences’’—i.e., goal-driven formal techniques, or by ‘‘appropriateness’’—i.e., adaptive reasoning driven by evolutionary techniques, both of which leave very little room for the playful foolishness of fictions that engender new meanings and imagined possibilities. In this paper we set out to explore our data with a view to discovering what some logics fueled by imagined possibilities might look like. Whether it is expected utility theory based on preferences, or Bayesian inference based on probability estimates, or transaction cost economics, the causal logics underlying the technologies of rational intelligence and evolutionary adaptation are all associated with certain formal calculi. There may or may not be any such calculi associated with effectual logics in a technology of foolishness. Instead it may turn out that what we have identified as alternative logics are actually genres of fiction that complement and counterbalance the causal calculi based on fact and forecast. Our data has convinced us, however, that these genres of fiction will prove crucial to the effective use of fact and forecast. Without fiction, fact cannot help us understand what has already happened. And forecast, contrary to received wisdom, cannot tell us what will happen. At best, it can tell us what may happen if we do not do things differently from the way we have done them in the past. As human beings our perceptions of who we are, what we know and whom we know are imagined fictions of who we might become, what we might make of our circumstances and what we might make possible or impossible for posterity. To the extent that entrepreneurs act on those fictions and produce particular performances of them in the economic theater, we hope our exposition of the effectual logics they use ‘‘ywill lead theories of choice to a slightly clearer understanding of the complexities of preference processing and to some modest links with the technologies of ethics, criticism, and aesthetics’’ (March, 1978, p. 605)—an enterprise close to Professor March’s heart.