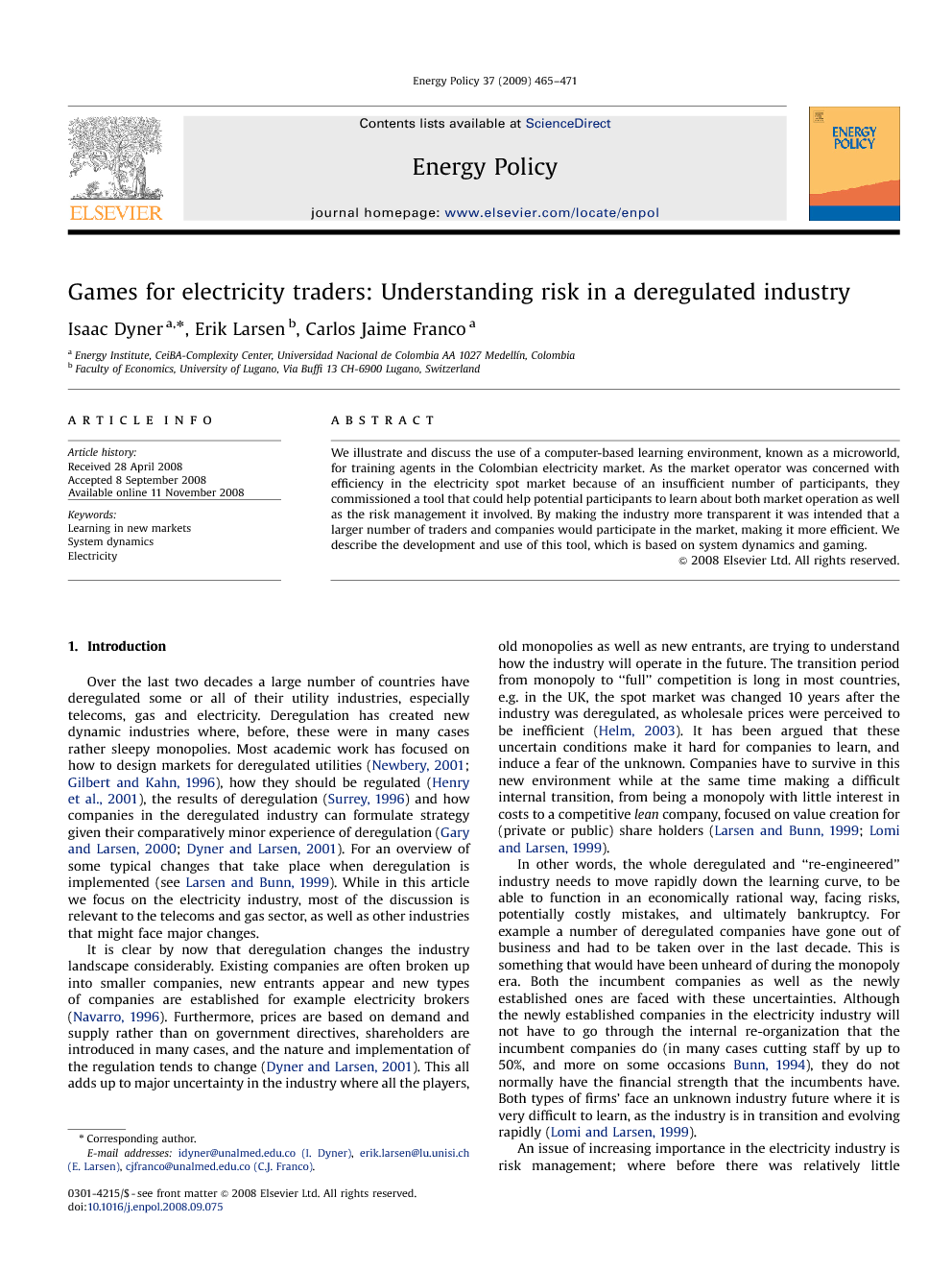 We illustrate and discuss the use of a computer-based learning environment, known as a microworld, for training agents in the Colombian electricity market. As the market operator was concerned with efficiency in the electricity spot market because of an insufficient number of participants, they commissioned a tool that could help potential participants to learn about both market operation as well as the risk management it involved. By making the industry more transparent it was intended that a larger number of traders and companies would participate in the market, making it more efficient. We describe the development and use of this tool, which is based on system dynamics and gaming.

Over the last two decades a large number of countries have deregulated some or all of their utility industries, especially telecoms, gas and electricity. Deregulation has created new dynamic industries where, before, these were in many cases rather sleepy monopolies. Most academic work has focused on how to design markets for deregulated utilities (Newbery, 2001; Gilbert and Kahn, 1996), how they should be regulated (Henry et al., 2001), the results of deregulation (Surrey, 1996) and how companies in the deregulated industry can formulate strategy given their comparatively minor experience of deregulation (Gary and Larsen, 2000; Dyner and Larsen, 2001). For an overview of some typical changes that take place when deregulation is implemented (see Larsen and Bunn, 1999). While in this article we focus on the electricity industry, most of the discussion is relevant to the telecoms and gas sector, as well as other industries that might face major changes. It is clear by now that deregulation changes the industry landscape considerably. Existing companies are often broken up into smaller companies, new entrants appear and new types of companies are established for example electricity brokers (Navarro, 1996). Furthermore, prices are based on demand and supply rather than on government directives, shareholders are introduced in many cases, and the nature and implementation of the regulation tends to change (Dyner and Larsen, 2001). This all adds up to major uncertainty in the industry where all the players, old monopolies as well as new entrants, are trying to understand how the industry will operate in the future. The transition period from monopoly to “full” competition is long in most countries, e.g. in the UK, the spot market was changed 10 years after the industry was deregulated, as wholesale prices were perceived to be inefficient (Helm, 2003). It has been argued that these uncertain conditions make it hard for companies to learn, and induce a fear of the unknown. Companies have to survive in this new environment while at the same time making a difficult internal transition, from being a monopoly with little interest in costs to a competitive lean company, focused on value creation for (private or public) share holders ( Larsen and Bunn, 1999; Lomi and Larsen, 1999). In other words, the whole deregulated and “re-engineered” industry needs to move rapidly down the learning curve, to be able to function in an economically rational way, facing risks, potentially costly mistakes, and ultimately bankruptcy. For example a number of deregulated companies have gone out of business and had to be taken over in the last decade. This is something that would have been unheard of during the monopoly era. Both the incumbent companies as well as the newly established ones are faced with these uncertainties. Although the newly established companies in the electricity industry will not have to go through the internal re-organization that the incumbent companies do (in many cases cutting staff by up to 50%, and more on some occasions Bunn, 1994), they do not normally have the financial strength that the incumbents have. Both types of firms’ face an unknown industry future where it is very difficult to learn, as the industry is in transition and evolving rapidly (Lomi and Larsen, 1999). An issue of increasing importance in the electricity industry is risk management; where before there was relatively little financial risk for companies (as they were monopolies), after deregulation this changed considerably. As short- and long-term contracts are being signed, this exposes all companies in the industry value-chain to a high potential risk. Typically, if a company has too much or too little electricity they will need to buy, in the case of a shortage, or sell, in the case of surplus, in the spot market. The spot market prices will in many cases be significantly different from the contract prices—exposing the companies that have to sell excess electricity to a loss if the Pool price is lower than the contract price they have agreed (or the opposite if the contract price is lower than the Pool price). Similarly, companies who have sold more than they have bought are also exposed to the market forces. The situation has many similarities with the way in which companies in the financial sector deals with risk and many of the same methods can be used, although these are only been introduced in the electricity sector during the last decade (Fusaro, 1998; Anderson et al., 2007). This, on top of the relatively complicated market rules, may make many actors who could potentially benefit from electricity trading stay away from the market. Against this background, the paper describes a case where the Colombian transmission company, ISA (at the time also in charge of market operations), was concerned about the level of participation in electricity trading in Colombia. With only a limited number of participating companies, the volume and market depth made it difficult to create an efficient market, and also made it more likely that some companies could exercise market power (Larsen et al., 2004; Dyner et al., 2006). ISA designed and developed a workshop and computer game in cooperation with the National University of Colombia, with the aim of creating a better understanding among potential electricity traders, such as large companies and independent brokers, of the potential risks and rewards for electricity trading. In this article we will describe this application, its use and the results that emerge from the use of this computer game. The paper is organized as follows. We first provide a short description of the deregulated Colombian industry, followed by a discussion of the use of games for learning. We then describe the model and the computer game based on the model. Finally, we discuss the results from running a number of workshops.