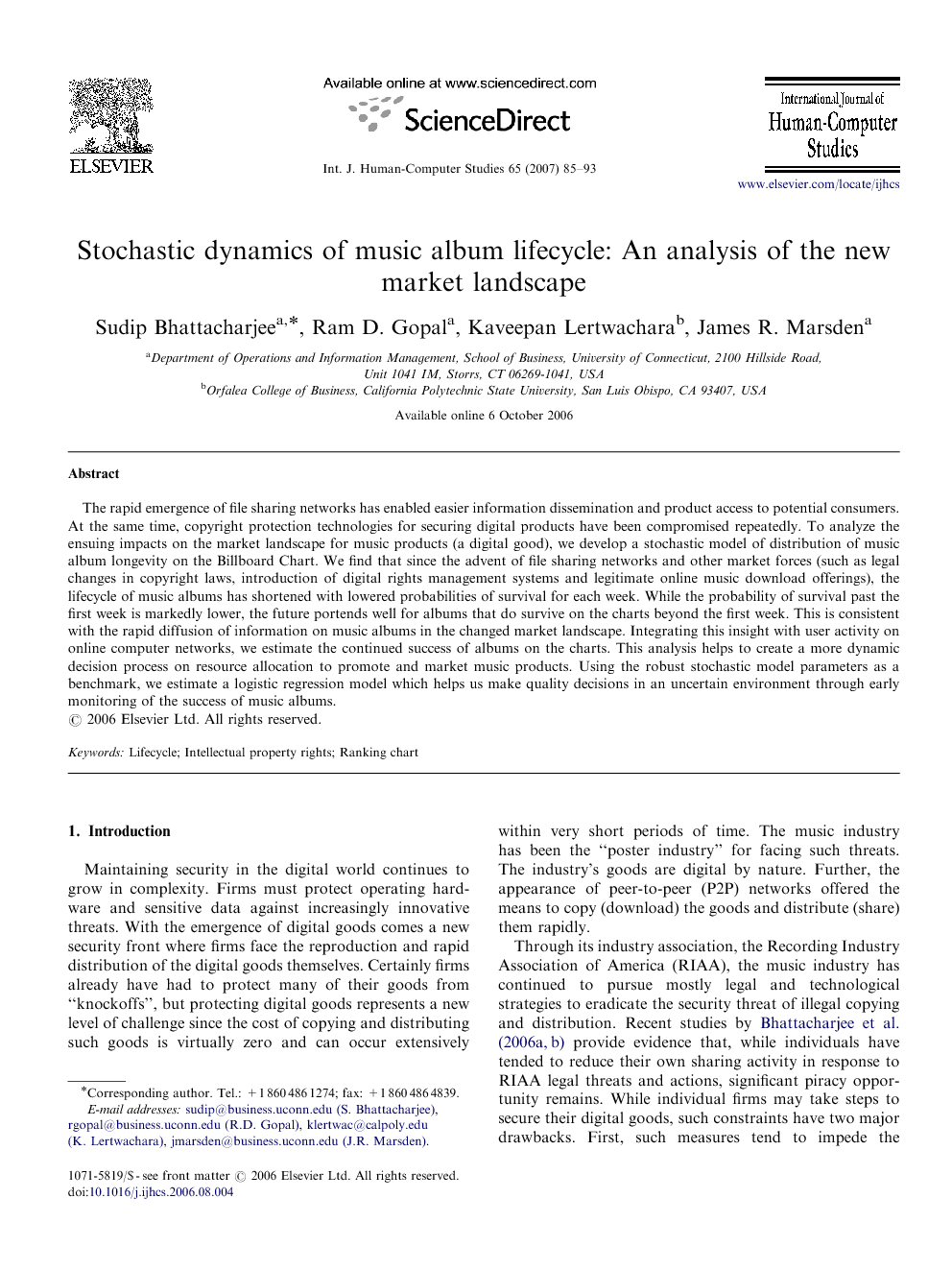 The rapid emergence of file sharing networks has enabled easier information dissemination and product access to potential consumers. At the same time, copyright protection technologies for securing digital products have been compromised repeatedly. To analyze the ensuing impacts on the market landscape for music products (a digital good), we develop a stochastic model of distribution of music album longevity on the Billboard Chart. We find that since the advent of file sharing networks and other market forces (such as legal changes in copyright laws, introduction of digital rights management systems and legitimate online music download offerings), the lifecycle of music albums has shortened with lowered probabilities of survival for each week. While the probability of survival past the first week is markedly lower, the future portends well for albums that do survive on the charts beyond the first week. This is consistent with the rapid diffusion of information on music albums in the changed market landscape. Integrating this insight with user activity on online computer networks, we estimate the continued success of albums on the charts. This analysis helps to create a more dynamic decision process on resource allocation to promote and market music products. Using the robust stochastic model parameters as a benchmark, we estimate a logistic regression model which helps us make quality decisions in an uncertain environment through early monitoring of the success of music albums.

Maintaining security in the digital world continues to grow in complexity. Firms must protect operating hardware and sensitive data against increasingly innovative threats. With the emergence of digital goods comes a new security front where firms face the reproduction and rapid distribution of the digital goods themselves. Certainly firms already have had to protect many of their goods from “knockoffs”, but protecting digital goods represents a new level of challenge since the cost of copying and distributing such goods is virtually zero and can occur extensively within very short periods of time. The music industry has been the “poster industry” for facing such threats. The industry's goods are digital by nature. Further, the appearance of peer-to-peer (P2P) networks offered the means to copy (download) the goods and distribute (share) them rapidly. Through its industry association, the Recording Industry Association of America (RIAA), the music industry has continued to pursue mostly legal and technological strategies to eradicate the security threat of illegal copying and distribution. Recent studies by Bhattacharjee et al., 2006a and Bhattacharjee et al., 2006b provide evidence that, while individuals have tended to reduce their own sharing activity in response to RIAA legal threats and actions, significant piracy opportunity remains. While individual firms may take steps to secure their digital goods, such constraints have two major drawbacks. First, such measures tend to impede the consumer's use of the digital good since they can restrict portability or require additional steps (e.g., security actions) that reduce consumer utility (Halderman, 2002). Second, the measures have proven less than “foolproof” and rather easily beaten (Reuters, 2002; Felten, 2003). Sony BMG's recent use of a rootkit with the XCP technology (Bergstein, 2005; Reuters, 2005) provides a prominent illustration of how an attempted technological security constraint can backfire (Bradley, 2005): Part of Sony's anti-pirating strategy is that some of its music will play only with media software included on the CD. When a user inserts the CD, he or she is asked to consent to an “end-user licensing agreement” for a Digital Rights Management application. If the user agrees, the rootkit automatically installs and hides (or “cloaks”) a suite of DRM software. Unfortunately, the rootkit application created a possible secret backdoor for hackers which led Sony to “hastily” post a patch. However, the tool to remove the XCP application itself created new vulnerabilities (Russinovich, 2005). The tale continues as California quickly filed suit under both unfair and deceptive trace acts and consumer protection acts, Texas filed suit for including “spyware” in its media player, and the Electronic Frontier Foundation filed suit seeking class-action status over its copy-protection software (Smith, 2005). A posting (by concord (198387), 11/10/05, #13996982) in slashdot.org's bulletin board offers the following perspective on the Sony anti-piracy actions: Now for the first time it is actually safer to download and listen to pirated music then (sic) it is to purchase and use compact disks and dvds. Piracy will become a matter of self-preservation. In addition, security professionals have consistently noted that all CD and DVD encryption techniques that have been tried by the entertainment industry have been broken by savvy consumers (Patrizio, 1999; Schneier, 2000; Craver et al., 2001; Associated Press, 2003; Clarke, 2005). Given wide dissemination of the encrypted music product among users (factors that make breaking encryption easier), it is not unusual to observe such copy protection technologies being defeated by smart users (Bergstein, 2005; Felten, 2005). Thus, a firm considering possible actions to protect its digital product may find little return in costly technological and legal anti-piracy measures. But can the firms identify and respond to the changing market they face? The post-1998–1999 period is characterized by consumers who increasingly search and consume music products in digital formats. Here we focus attention on what significant changes have occurred in the landscape of music products and their market lifecycle since the introduction of significant new technology, including P2P networks and other market forces (including online music stores, higher penetration of broadband into homes, digital rights management (SDMI initiative) and evolving copyright laws (DMCA 1998, Sonny Bono Copyright Term Extension Act 1998). We first develop an analytical model of music album lifecycle to provide a robust foundation to develop effective decision making tools for a music company to better manage its music products in the market place. The model demonstrates how the pattern of album lifecycle has undergone a shift in the years following the introduction of new technologies and other market forces. Following the analytic model, we utilize actual user activities on an online P2P network to fine-tune the decision-making process. We show how incorporating actual user behavior from interactive P2P computer networks helps a decision maker to better predict and respond to market success of a digital good in a dynamic environment. A firm's ability to act with these decision tools, which combine product lifecycle analytics with analysis of consumer actions on online computer networks, would provide greater market value protection for the firm's digital products than would technological and legal anti-piracy measures alone.

Technological advances can have significant impacts on economic markets. Here, we analyzed the lifecycle of albums on sales-based rankings, the Billboard Chart. Following earlier work related to the markets for artists, we proposed a stochastic process model. Brute-force estimation yielded excellent fits for all years. The nature of the estimated models indicates a shift after the technological innovations of MP3 and online file sharing that occurred over the 1998–1999 period. The 2000–2002 period is characterized by a much shorter lifecycle. Utilizing this initial information, we estimate their continued success on the charts by combining chart information and user activity data from P2P networks. In our stochastic lifecycle analysis, we utilized the entire set of outcomes (Billboard Top 100 rankings) for the comparison periods: 1995–1997 and 2000–2002. We find that music as a digital good has been significantly impacted by market changes brought about by easier information dissemination and product access to potential consumers. While overall album survival has decreased in the 2000–2002 period, the chances of survival increase dramatically after an album has survived beyond the first week during this period. This indicates a pattern that the ‘‘good’’ albums survive more. This also suggests that the new environment brought on by technological and other market innovations is not conducive to lower quality music albums. Easier sampling and information dissemination hurts the lower quality albums. In general, the lifecycle of lower quality products will tend to diminish faster under this new environment. The analysis also suggests that albums face a shorter lifecycle overall. Does it indicate front-end sales to a larger degree? If so, what are the implications for copyright laws that have limits of 70 years and longer on information goods such as music, books, etc.? Our conclusions also emphasize the robustness of our stochastic lifecycle model and consistency of results within each of the three-year periods, together with the differences between the two periods. Even with significant ‘‘churn’’ in the music market and related environment between the 1995–97 and 2000–2002 periods, our simple yet robust model effectively captures the stochastic component of the chart lifecycle process. Our parsimonious logistic regression model likewise has a high explanatory power while simply using two complementary elements of a music album’s debut week information. This model approach is applicable to other stochastic processes that follow a similar pattern.