عنوان انگلیسی
Why are the French so different from the Germans? Underpricing of IPOs on the Euro New Markets
دانلود فوری مقاله + سفارش ترجمه 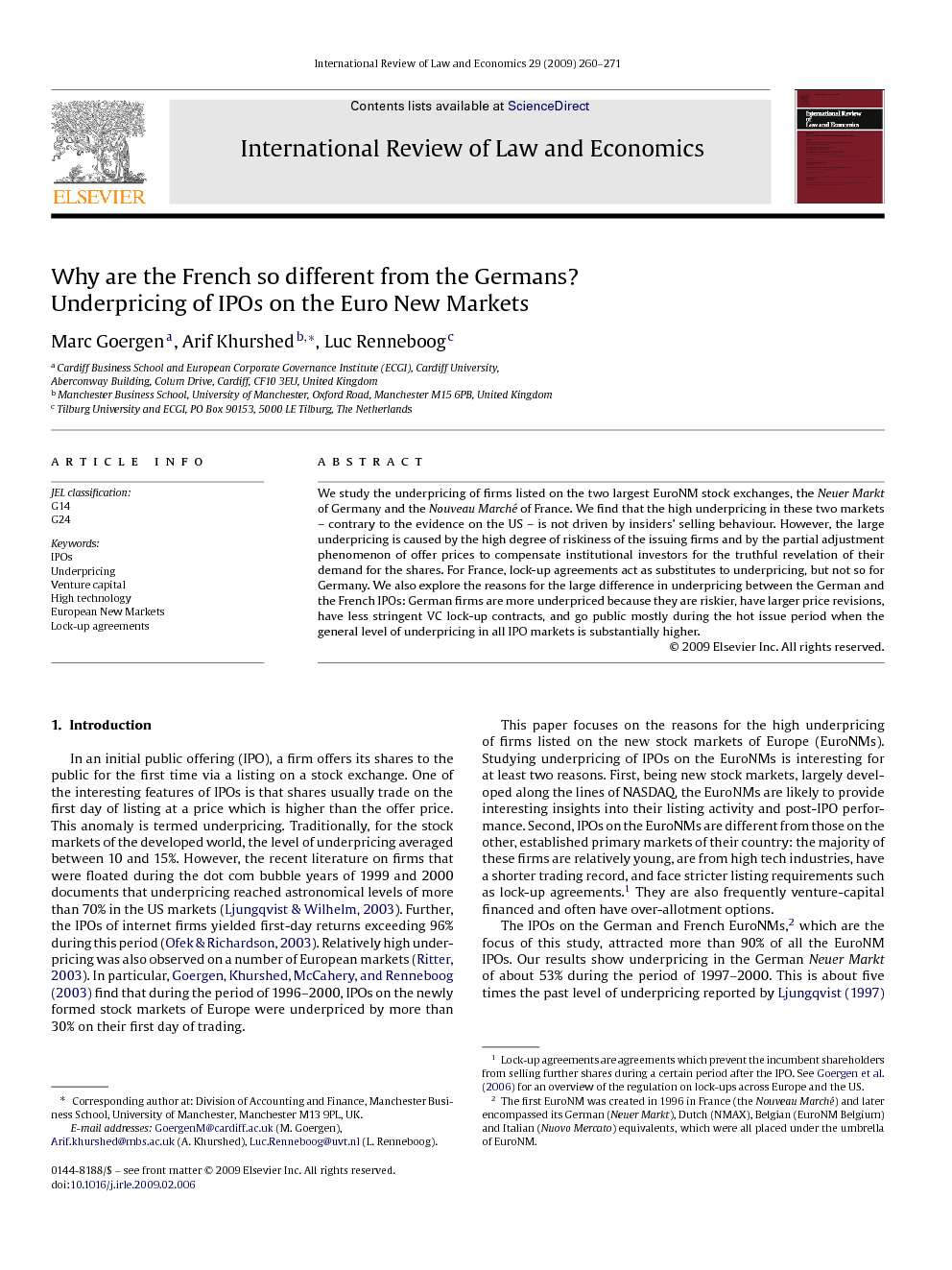 We study the underpricing of firms listed on the two largest EuroNM stock exchanges, the Neuer Markt of Germany and the Nouveau Marché of France. We find that the high underpricing in these two markets – contrary to the evidence on the US – is not driven by insiders’ selling behaviour. However, the large underpricing is caused by the high degree of riskiness of the issuing firms and by the partial adjustment phenomenon of offer prices to compensate institutional investors for the truthful revelation of their demand for the shares. For France, lock-up agreements act as substitutes to underpricing, but not so for Germany. We also explore the reasons for the large difference in underpricing between the German and the French IPOs: German firms are more underpriced because they are riskier, have larger price revisions, have less stringent VC lock-up contracts, and go public mostly during the hot issue period when the general level of underpricing in all IPO markets is substantially higher.

In an initial public offering (IPO), a firm offers its shares to the public for the first time via a listing on a stock exchange. One of the interesting features of IPOs is that shares usually trade on the first day of listing at a price which is higher than the offer price. This anomaly is termed underpricing. Traditionally, for the stock markets of the developed world, the level of underpricing averaged between 10 and 15%. However, the recent literature on firms that were floated during the dot com bubble years of 1999 and 2000 documents that underpricing reached astronomical levels of more than 70% in the US markets (Ljungqvist & Wilhelm, 2003). Further, the IPOs of internet firms yielded first-day returns exceeding 96% during this period (Ofek & Richardson, 2003). Relatively high underpricing was also observed on a number of European markets (Ritter, 2003). In particular, Goergen, Khurshed, McCahery, and Renneboog (2003) find that during the period of 1996–2000, IPOs on the newly formed stock markets of Europe were underpriced by more than 30% on their first day of trading. This paper focuses on the reasons for the high underpricing of firms listed on the new stock markets of Europe (EuroNMs). Studying underpricing of IPOs on the EuroNMs is interesting for at least two reasons. First, being new stock markets, largely developed along the lines of NASDAQ, the EuroNMs are likely to provide interesting insights into their listing activity and post-IPO performance. Second, IPOs on the EuroNMs are different from those on the other, established primary markets of their country: the majority of these firms are relatively young, are from high tech industries, have a shorter trading record, and face stricter listing requirements such as lock-up agreements.1 They are also frequently venture-capital financed and often have over-allotment options. The IPOs on the German and French EuroNMs,2 which are the focus of this study, attracted more than 90% of all the EuroNM IPOs. Our results show underpricing in the German Neuer Markt of about 53% during the period of 1997–2000. This is about five times the past level of underpricing reported by Ljungqvist (1997) for Germany. In comparison, during the period of 1996–2000, the underpricing in the French Nouveau Marché amounted to 21%, about twice the past level ( Derrien & Womack, 2003). Interestingly, we find that neither the selling behaviour of insiders in the IPO nor the involvement of venture capitalists has any impact on underpricing. In addition, price revisions during the offer process occur more frequently in Germany and are larger than those in France. This suggests that the German investors were more forthcoming with information about the potential demand for shares enabling the investment banks to set more accurate prices and/or were overoptimistic about their national IPO market. For France, lock-up agreements are a substitute for underpricing. The more stringent the lock-up, the smaller is the level of underpricing. In some firms, the underwriters are also shareholders in the firms they are taking public. For Germany, this leads to higher underpricing whereas for France it has the opposite effect. Finally, we study some of the reasons behind the large differences in underpricing between the two markets. We find that German IPOs are more underpriced because they are riskier, provide a larger compensation for the truthful revelation of information by potential investors, have less stringent VC lock-up contracts and mostly come to the market during the hot issue period when the average underpricing in all IPO markets is substantially higher. The rest of the paper is organised as follows. Section 2 briefly discusses the creation (and demise) of the French and German EuroNM markets and compares the characteristics of the two markets. Section 3 reviews the current literature on underpricing on the European New Markets. Section 4 then discusses the determinants of underpricing and formulates the hypotheses, while Section 5 specifies the data sources and describes the sample. Section 6 documents the underpricing in the two EuroNMs and relates it to the IPO characteristics. Section 7 discusses the results and Section 8 concludes.

IPOs on the EuroNMs are characterised by the presence of lockup agreements, the use of the book-building procedure for their valuation, venture-capital backing, the existence of over-allotment options and high levels of underpricing. In this paper,we first document some of these idiosyncrasies and then focus on how – if at all – they influence the level of underpricing in the two largest members of EuroNM network, namely the Neuer Markt of Germany and the Nouveau Marché of France. We find that all IPOs (except for one German IPO) use the bookbuilding procedure for their pricing. IPOs from both markets have lock-up periods which exceed the compulsory minimum. We also find that a large number of IPOs from both markets are venturecapital backed and that a large number of VCs do not sell any of their holdings in the IPO. We find that the high level of underpricing in both markets is neither driven by insider selling behaviour nor by the dilution of insider ownership in the IPO.We show that IPOs are highly underpriced if they are risky and if their offer price is revised upwards. Lock-up agreements seem to act as substitute devices to underpricing for the case of French IPOs. Also, for the French firms, if the VCs are locked up beyond the minimum requirement, then the underpricing is lower. Further, the more stringent the French lock-up, the smaller is the level of underpricing. The presence of underwriters as shareholders has a positive impact on underpricing in Germany but a negative one in France. This suggests that German underwriters may have been willing to suffer wealth losses resulting from underpricing in order to capture future business. In contrast, French underwriters may be more concerned about minimising their personal wealth losses due to underpricing. Finally, we explore the reasons for the large difference in underpricing between the German and French EuroNM markets and find that German firms are relatively more underpriced than French firms because they are riskier, have larger price revisions, have less stringent VC lock-up contracts and go public mostly during the hot issue period when the general level of underpricing in all IPO markets is substantially higher. Future research on the underpricing of European stock markets should focus on extending the Rocholl (2007) and Bessler and Bittelmeyer (2008) studies on German IPOs to other markets such as France. Following Rocholl, comparisons of stock option plans for Germany and France should be made in order to document the differences in the stock options granted to insiders, in the exercise price for such stock options, and their (likely) effect on underpricing. Similarly, future studies should examine the extent of patent rights owned by IPO companies in the two markets. Finally, the behaviour of the underwriting banks that are in charge of the share allocations warrants a thorough investigation.