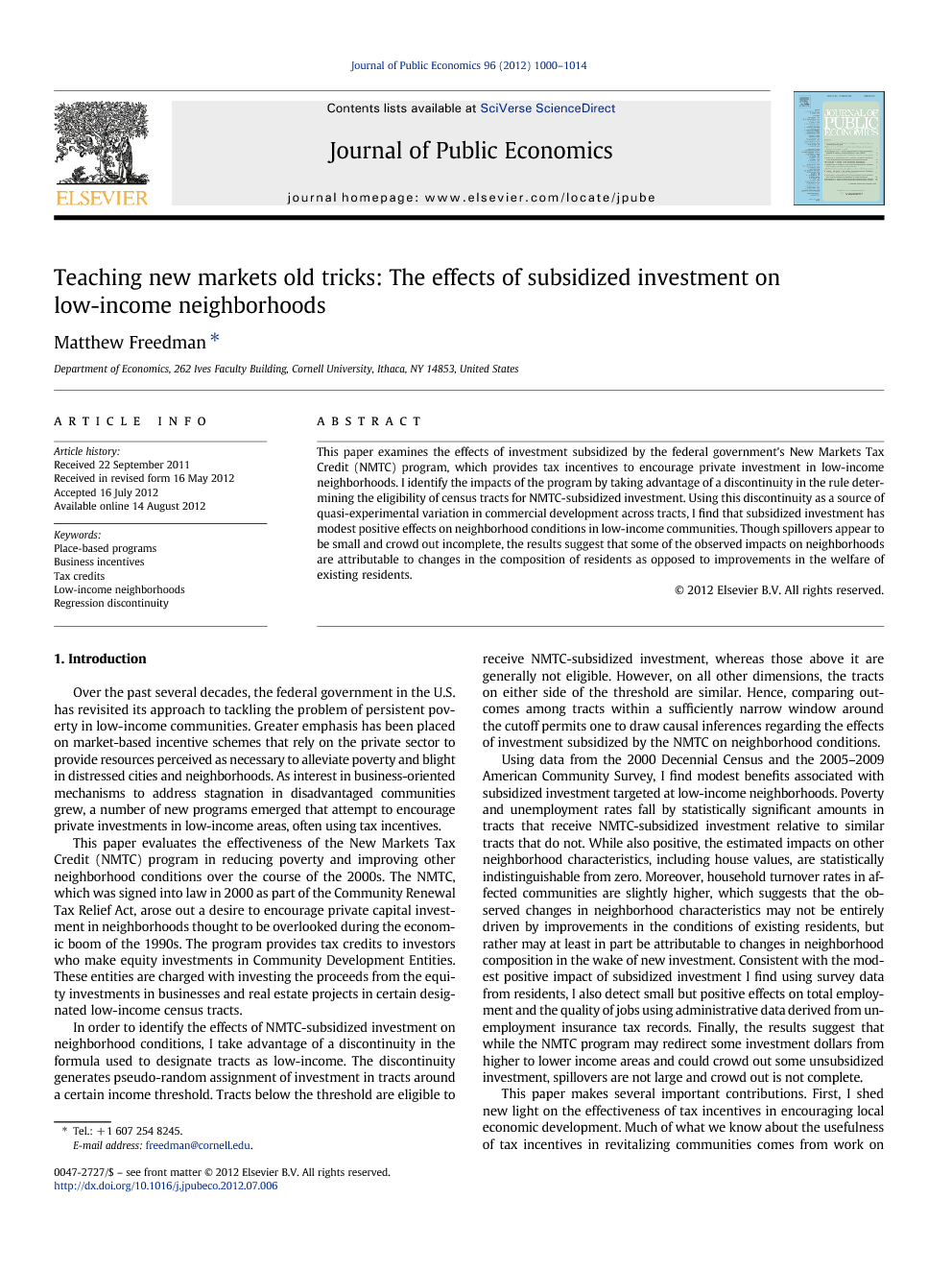 This paper examines the effects of investment subsidized by the federal government's New Markets Tax Credit (NMTC) program, which provides tax incentives to encourage private investment in low-income neighborhoods. I identify the impacts of the program by taking advantage of a discontinuity in the rule determining the eligibility of census tracts for NMTC-subsidized investment. Using this discontinuity as a source of quasi-experimental variation in commercial development across tracts, I find that subsidized investment has modest positive effects on neighborhood conditions in low-income communities. Though spillovers appear to be small and crowd out incomplete, the results suggest that some of the observed impacts on neighborhoods are attributable to changes in the composition of residents as opposed to improvements in the welfare of existing residents.

Over the past several decades, the federal government in the U.S. has revisited its approach to tackling the problem of persistent poverty in low-income communities. Greater emphasis has been placed on market-based incentive schemes that rely on the private sector to provide resources perceived as necessary to alleviate poverty and blight in distressed cities and neighborhoods. As interest in business-oriented mechanisms to address stagnation in disadvantaged communities grew, a number of new programs emerged that attempt to encourage private investments in low-income areas, often using tax incentives. This paper evaluates the effectiveness of the New Markets Tax Credit (NMTC) program in reducing poverty and improving other neighborhood conditions over the course of the 2000s. The NMTC, which was signed into law in 2000 as part of the Community Renewal Tax Relief Act, arose out a desire to encourage private capital investment in neighborhoods thought to be overlooked during the economic boom of the 1990s. The program provides tax credits to investors who make equity investments in Community Development Entities. These entities are charged with investing the proceeds from the equity investments in businesses and real estate projects in certain designated low-income census tracts. In order to identify the effects of NMTC-subsidized investment on neighborhood conditions, I take advantage of a discontinuity in the formula used to designate tracts as low-income. The discontinuity generates pseudo-random assignment of investment in tracts around a certain income threshold. Tracts below the threshold are eligible to receive NMTC-subsidized investment, whereas those above it are generally not eligible. However, on all other dimensions, the tracts on either side of the threshold are similar. Hence, comparing outcomes among tracts within a sufficiently narrow window around the cutoff permits one to draw causal inferences regarding the effects of investment subsidized by the NMTC on neighborhood conditions. Using data from the 2000 Decennial Census and the 2005–2009 American Community Survey, I find modest benefits associated with subsidized investment targeted at low-income neighborhoods. Poverty and unemployment rates fall by statistically significant amounts in tracts that receive NMTC-subsidized investment relative to similar tracts that do not. While also positive, the estimated impacts on other neighborhood characteristics, including house values, are statistically indistinguishable from zero. Moreover, household turnover rates in affected communities are slightly higher, which suggests that the observed changes in neighborhood characteristics may not be entirely driven by improvements in the conditions of existing residents, but rather may at least in part be attributable to changes in neighborhood composition in the wake of new investment. Consistent with the modest positive impact of subsidized investment I find using survey data from residents, I also detect small but positive effects on total employment and the quality of jobs using administrative data derived from unemployment insurance tax records. Finally, the results suggest that while the NMTC program may redirect some investment dollars from higher to lower income areas and could crowd out some unsubsidized investment, spillovers are not large and crowd out is not complete. This paper makes several important contributions. First, I shed new light on the effectiveness of tax incentives in encouraging local economic development. Much of what we know about the usefulness of tax incentives in revitalizing communities comes from work on state enterprise zones (EZs). State EZs provide tax incentives to new and expanding businesses in designated cities and neighborhoods. These incentives can take the form of employment credits or income, property, or sales tax breaks. Evaluating the effectiveness of EZs has proven challenging, in part because of the high degree of variation in program characteristics across states; not only do programs differ in the generosity and types of incentives offered to businesses, but they also vary in the criteria used to determine communities' eligibility for the program. Perhaps partly a result, the findings of existing studies on the effects of the EZs are mixed. Several papers, such as Papke (1994), Billings (2009), Ham et al. (2011) and Freedman (forthcoming), find positive effects of EZs on local economic activity and neighborhood conditions.1 However, Boarnet and Bogart (1996), Elvery (2009), Neumark and Kolko (2010), and others find that EZs have little or no effect on local employment, casting doubt on the effectiveness of tax incentives in spurring growth in targeted areas.2 More broadly, this paper contributes to the growing literature on the impact of a new generation of place-based policies in the U.S. Much of this research has focused narrowly on housing policy (e.g., Baum-Snow and Marion, 2009, Gabriel and Rosenthal, 2009 and Freedman and Owens, 2011). The work that has been done outside housing has typically struggled with identification, often due to nonrandom selection of communities into programs. I exploit plausibly exogenous variation in subsidized investment across communities that results from federal rules determining the eligibility of census tracts for NMTC funds. The paper is organized as follows. The next section provides background on the NMTC program. Section 3 details my econometric approach. After describing the data and providing descriptive statistics in Section 4, I present results on the spatial distribution of NMTC-subsidized investment in Section 5. Section 6 examines how this investment affects housing and resident characteristics in low-income communities. Section 7 takes up the issue of crowd out and the impact of subsidized investment on employment and the composition of jobs in low-income communities. Section 8 concludes.

Although place-based policies have grown in importance in recent decades, many remain skeptical of their efficacy. Lending credence to this skepticism are numerous studies on programs such as state EZs that suggest that there is little to no benefit associated with subsidizing investment in struggling cities and neighborhoods. However, many of these studies have struggled themselves with identification, due in large part to self-selection of areas into place-based programs. The paper adds to the literature on place-based programs by evaluating the effects of the New Markets Tax Credit (NMTC) program on neighborhoods. The structure of the program allows me to overcome endogeneity and selection problems that have plagued past studies on other place-based programs. In particular, a discontinuity in the formula used to determine program eligibility for census tracts generates pseudo-random assignment of NMTC-subsidized investment to neighborhoods around a certain income threshold. Tracts below the threshold are eligible to receive investment under the program, whereas those above it are generally not eligible. However, the tracts on either side of the threshold are otherwise similar. Hence, comparing outcomes among tracts within a sufficiently narrow window around the cutoff permits one to draw causal inferences regarding the effects of NMTC-subsidized investment on neighborhoods. I find some evidence that investment subsidized under the NMTC program reduces poverty and unemployment rates in relatively low-income census tracts, although the results suggest that some of these effects are driven by changes in the composition of residents rather than improvement in the welfare of existing residents. The impacts on other neighborhood characteristics, including home values, are positive but statistically indistinguishable from zero. There is also some evidence to suggest that investment increases total private-sector employment and improves the quality of jobs in affected areas. However, the estimated effects are not large and are often statistically imprecise. I tentatively conclude that while there appear to be some positive effects of subsidized investment in disadvantaged neighborhoods, the benefits associated with subsidized investment are modest. This finding is consistent with results from studies on other place-based programs, such as the Low-Income Housing Tax Credit (Baum-SnowandMarion, 2009) and the Community Reinvestment Act (Gabriel and Rosenthal, 2009). More broadly, this paper builds on a burgeoning literature exploiting geographic boundaries to identify the effects of various policies and programs. Research along these lines include studies on education (Black, 1999), the environment (Ito, 2011), social insurance programs (Lalive, 2008), minimum wages (Dube et al., 2010), and other areas. Expanding on this literature, this paper exploits a discontinuous eligibility formula that generates quasi-experimental variation across geographies in subsidized investment to evaluate a large-scale place-based program that aims to reinvigorate distressed communities. While the NMTC program is still in its infancy and further research is necessary to establish its longer-run impacts on neighborhoods, this paper suggests that its initial effects may be positive, but not large.