عنوان انگلیسی
Purchasing and supply managers provide early clues on the direction of the US economy : An application of a new market-timing test
دانلود فوری مقاله + سفارش ترجمه 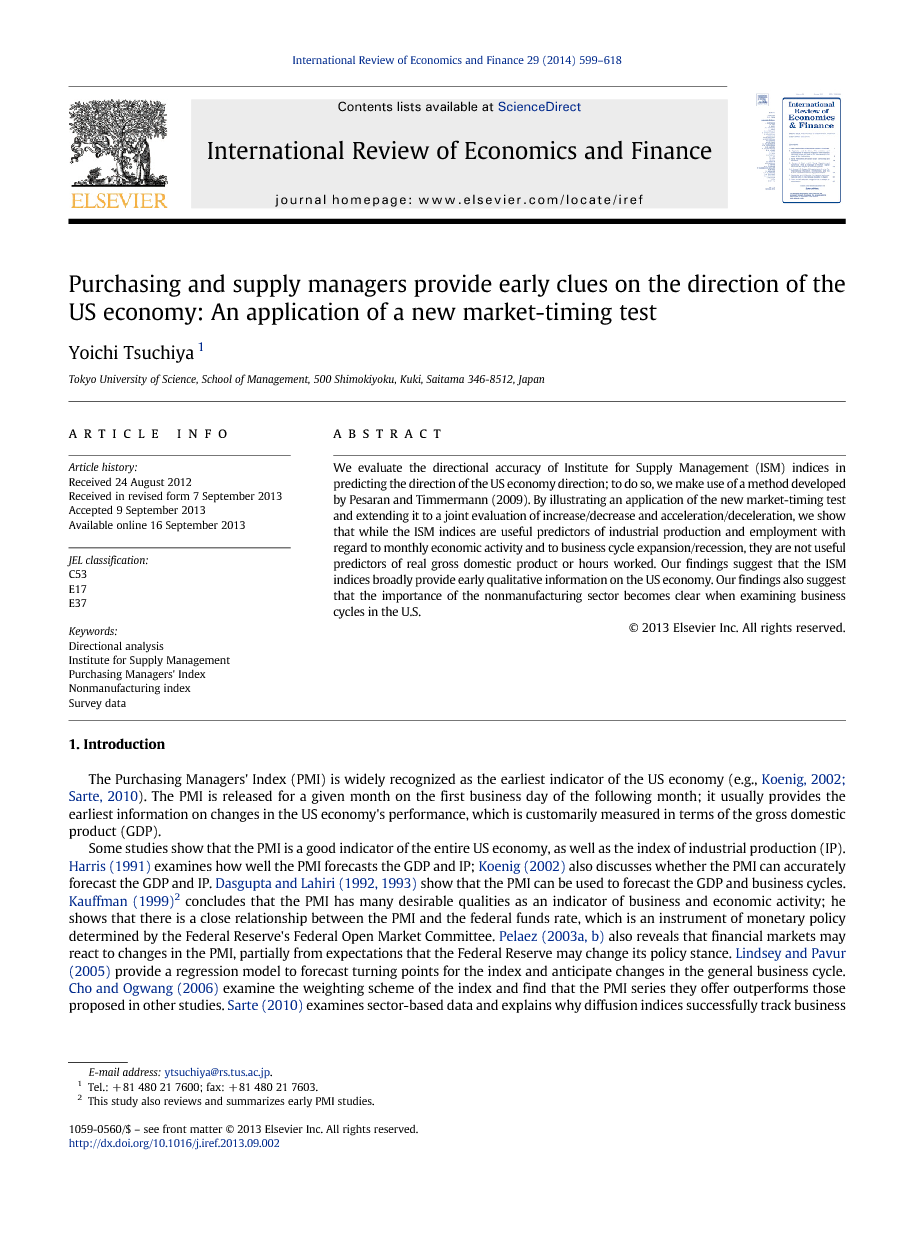 We evaluate the directional accuracy of Institute for Supply Management (ISM) indices in predicting the direction of the US economy direction; to do so, we make use of a method developed by Pesaran and Timmermann (2009). By illustrating an application of the new market-timing test and extending it to a joint evaluation of increase/decrease and acceleration/deceleration, we show that while the ISM indices are useful predictors of industrial production and employment with regard to monthly economic activity and to business cycle expansion/recession, they are not useful predictors of real gross domestic product or hours worked. Our findings suggest that the ISM indices broadly provide early qualitative information on the US economy. Our findings also suggest that the importance of the nonmanufacturing sector becomes clear when examining business cycles in the U.S.

We investigate whether the indices released by the ISM, the PMI, and NMI series predict the increase/decrease and the acceleration/deceleration of US monthly economic activities; we do so by using directional tests. We show that the ISM indices are useful predictors of IP, as is NBER's business cycle chronology, but that they are not useful predictors of real GDP or hours worked. Although most of the ISM series are not useful in predicting acceleration/deceleration in most of the economic variables– even though they are useful in predicting increase/decrease in most of the economic variables–the joint evaluation of IP and employment indicates joint usefulness. Our findings suggest that the ISM indices broadly provide early qualitative information on the US economy. Additionally, these findings also suggest that the importance of the nonmanufacturing sector has been present in the examination of business cycles in the U.S., even though the service sector is not considered as cyclical as the manufacturing sector. These investigations also indicate the advantage of using the new PT test in investigating the directional accuracy of macroeconomic variables. The new PT test has rarely been applied to macroeconomic forecasts, and more empirical applications of that test need to be undertaken. In particular, further analysis of whether the PMI outside the U.S. provides valuable information of economic activity in a given country could be beneficial for policymakers and practitioners in financial markets and business.