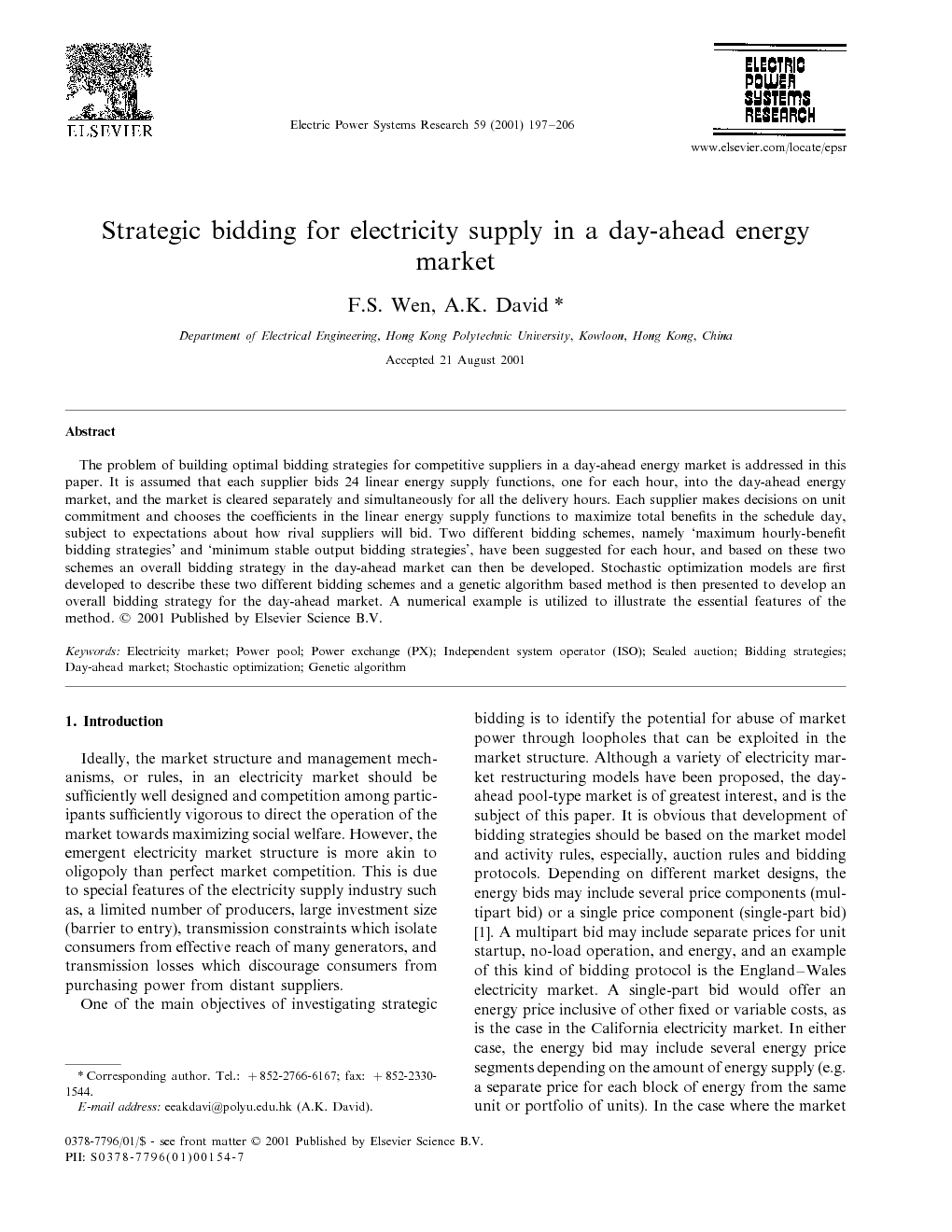 The problem of building optimal bidding strategies for competitive suppliers in a day-ahead energy market is addressed in this paper. It is assumed that each supplier bids 24 linear energy supply functions, one for each hour, into the day-ahead energy market, and the market is cleared separately and simultaneously for all the delivery hours. Each supplier makes decisions on unit commitment and chooses the coefficients in the linear energy supply functions to maximize total benefits in the schedule day, subject to expectations about how rival suppliers will bid. Two different bidding schemes, namely ‘maximum hourly-benefit bidding strategies’ and ‘minimum stable output bidding strategies’, have been suggested for each hour, and based on these two schemes an overall bidding strategy in the day-ahead market can then be developed. Stochastic optimization models are first developed to describe these two different bidding schemes and a genetic algorithm based method is then presented to develop an overall bidding strategy for the day-ahead market. A numerical example is utilized to illustrate the essential features of the method.

A method to build bidding strategies for power suppliers in the California-type day-ahead energy market is presented with an objective of maximizing total benefits. In this market, power suppliers are required to bid, simultaneously, 24 linear energy supply functions, one for each hour, and the system dispatch levels are stipulated separately for each hour by a power exchange (PX) utilizing the uniform market clearing price rule. First, a conceptual framework is proposed and two different bidding schemes, namely ‘maximum hourly-benefit bidding strategies’ and ‘minimum stable output bidding strategies’, are suggested for each hour. Then, stochastic optimization models are developed to describe these two different bidding schemes. Finally, a genetic algorithm based method is presented to develop an overall bidding strategy in the day-ahead market. By using this method, the unit commitment status and bidding strategies for each operating hour can be determined. The method is especially suitable for those suppliers with marginal or near-marginal generating units. Moreover, imperfect knowledge of rivals, including unsymmetrical cases, can be modeled in the proposed framework. An example with six suppliers has been used to demonstrate the feasibility and efficiency of the method.