عنوان انگلیسی
Misreading liberalisation and privatisation: The case of the US energy utilities in Europe
دانلود فوری مقاله + سفارش ترجمه 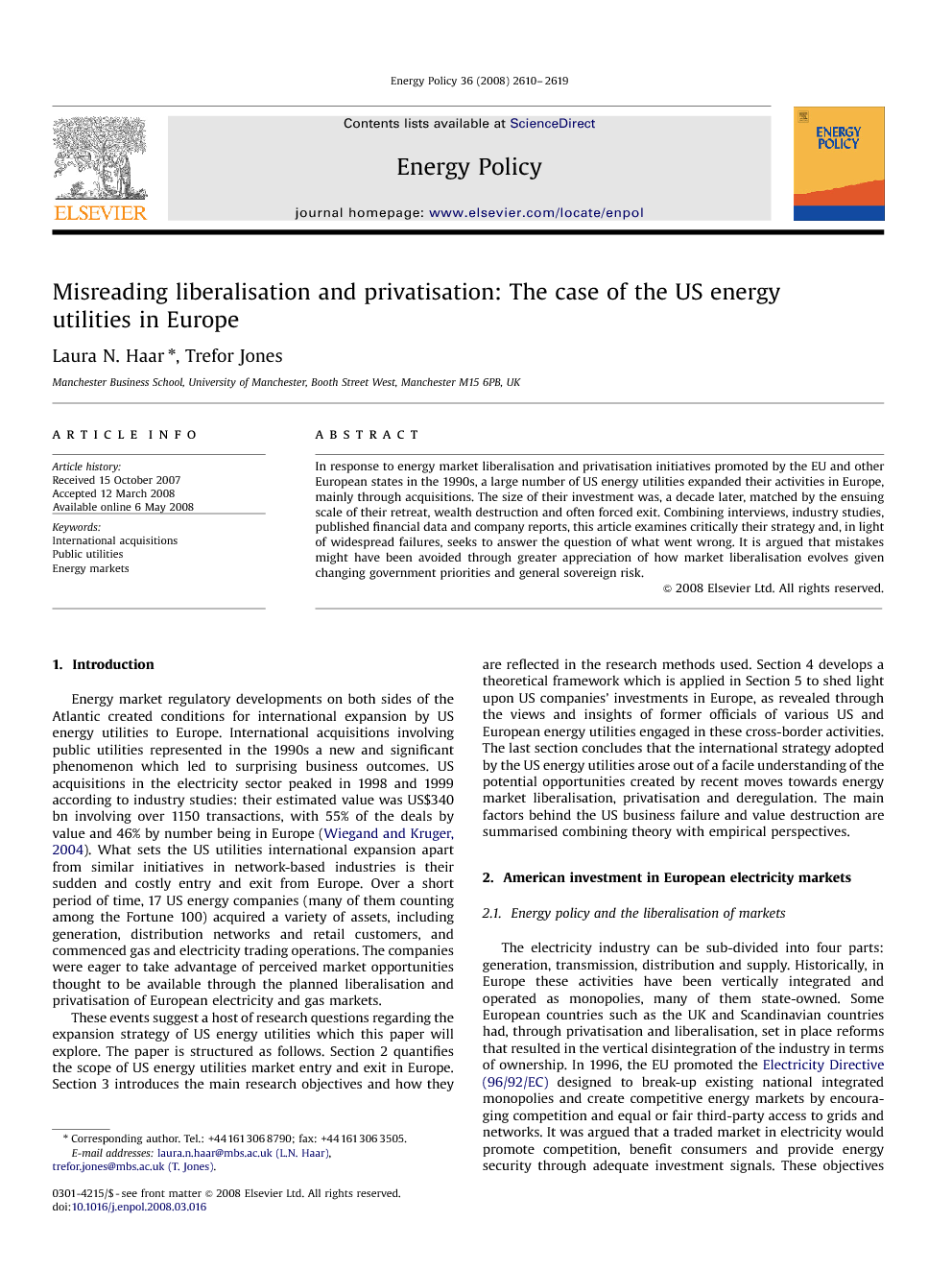 In response to energy market liberalisation and privatisation initiatives promoted by the EU and other European states in the 1990s, a large number of US energy utilities expanded their activities in Europe, mainly through acquisitions. The size of their investment was, a decade later, matched by the ensuing scale of their retreat, wealth destruction and often forced exit. Combining interviews, industry studies, published financial data and company reports, this article examines critically their strategy and, in light of widespread failures, seeks to answer the question of what went wrong. It is argued that mistakes might have been avoided through greater appreciation of how market liberalisation evolves given changing government priorities and general sovereign risk.

Energy market regulatory developments on both sides of the Atlantic created conditions for international expansion by US energy utilities to Europe. International acquisitions involving public utilities represented in the 1990s a new and significant phenomenon which led to surprising business outcomes. US acquisitions in the electricity sector peaked in 1998 and 1999 according to industry studies: their estimated value was US$340 bn involving over 1150 transactions, with 55% of the deals by value and 46% by number being in Europe (Wiegand and Kruger, 2004). What sets the US utilities international expansion apart from similar initiatives in network-based industries is their sudden and costly entry and exit from Europe. Over a short period of time, 17 US energy companies (many of them counting among the Fortune 100) acquired a variety of assets, including generation, distribution networks and retail customers, and commenced gas and electricity trading operations. The companies were eager to take advantage of perceived market opportunities thought to be available through the planned liberalisation and privatisation of European electricity and gas markets. These events suggest a host of research questions regarding the expansion strategy of US energy utilities which this paper will explore. The paper is structured as follows. Section 2 quantifies the scope of US energy utilities market entry and exit in Europe. Section 3 introduces the main research objectives and how they are reflected in the research methods used. Section 4 develops a theoretical framework which is applied in Section 5 to shed light upon US companies’ investments in Europe, as revealed through the views and insights of former officials of various US and European energy utilities engaged in these cross-border activities. The last section concludes that the international strategy adopted by the US energy utilities arose out of a facile understanding of the potential opportunities created by recent moves towards energy market liberalisation, privatisation and deregulation. The main factors behind the US business failure and value destruction are summarised combining theory with empirical perspectives.

According to existing literature on international acquisitions, from an FDI perspective, a large-scale commitment to a recently liberalised market represents a risky proposition even for experienced overseas players, not to mention new investors into a politically sensitive sector as was the case with the US energy utilities. In addition, the combination of cash reserves and expertise in trading and pricing of market risk, may bring only small benefits from internationalisation for network utilities. Although companies may be global in scope, power generation and distribution are, like gas procurement and distribution, regional by nature, at most national, with occasional cross-border opportunities. When such companies invest abroad they have to ‘replicate’ themselves to some extent in foreign markets and this is not an easy process for energy utilities due to considerable costs involved and the inherent absence of economies of scale. Therefore, the extent to which such companies can internationalise activities is limited by the very nature of their industry. With these constraints in mind, the present analysis suggests that, while there were good strategic reasons for investing in Europe, the US energy utilities misread the process of liberalisation and privatisation of the European energy markets. Our interviewees agreed that their companies had limited knowledge of operating outside their regulated US markets and, given the prices paid for assets, they believed that liberalisation and privatisation programmes would create conditions to utilise successfully their skills and capital. Many of them believed that the experience of banks with the ‘Big-Bang’ of the 1980s could be repeated for gas and power markets. But, as explained, although market liberalisation made gains in some parts of Europe such as Germany (where wholesale prices fell as a result of competitive pressures upon market players) and in Scandinavia (where liquid power exchange markets did exist), for most of Europe, the UK market included, competition failed to deliver expected results. Overall, the speed and scope of deregulation and privatisation in EU countries was overestimated hence the scope for sustainable and successful investment was reduced. The fall in wholesale prices hit hard those generation-only US utilities which had neither wholesale nor retail customers and revealed the importance of asset ownership: as one official remarked, ‘incumbents traded around assets while Americans just… traded’. The present analysis suggests that US companies also underestimated the strength of European incumbents especially in having access to retail and wholesale customers. Under competitive pressures, with physical assets, power stations and pipelines, the US companies miscalculated the advantages of incumbents. According to interviewees, no such scenarios (predictable from a theoretical standpoint) were considered by US companies’ officials prior to investment in Europe as they believed that officially announced Brussels-led policies would be carried through. But European governments, dependent upon their constituencies (many of whom remained opposed to market liberalisation and all that it entails), were reluctant to adopt promptly EU legislation in a politically sensitive sector. Not all cross-border investments went sour. Mid-American is still present in the UK, together with European utilities such as E. On, RWE, EdF and, of late, Iberdrola. Although the history of transatlantic expansion and takeovers in the utility sector over the last two decades is not positive, several European incumbents such as RWE, E.On and Iberdrola have recently expanded their activities in the Americas. Importantly, energy utility investors should never underestimate the role and support national governments can offer, even when competition is encouraged at regional level.