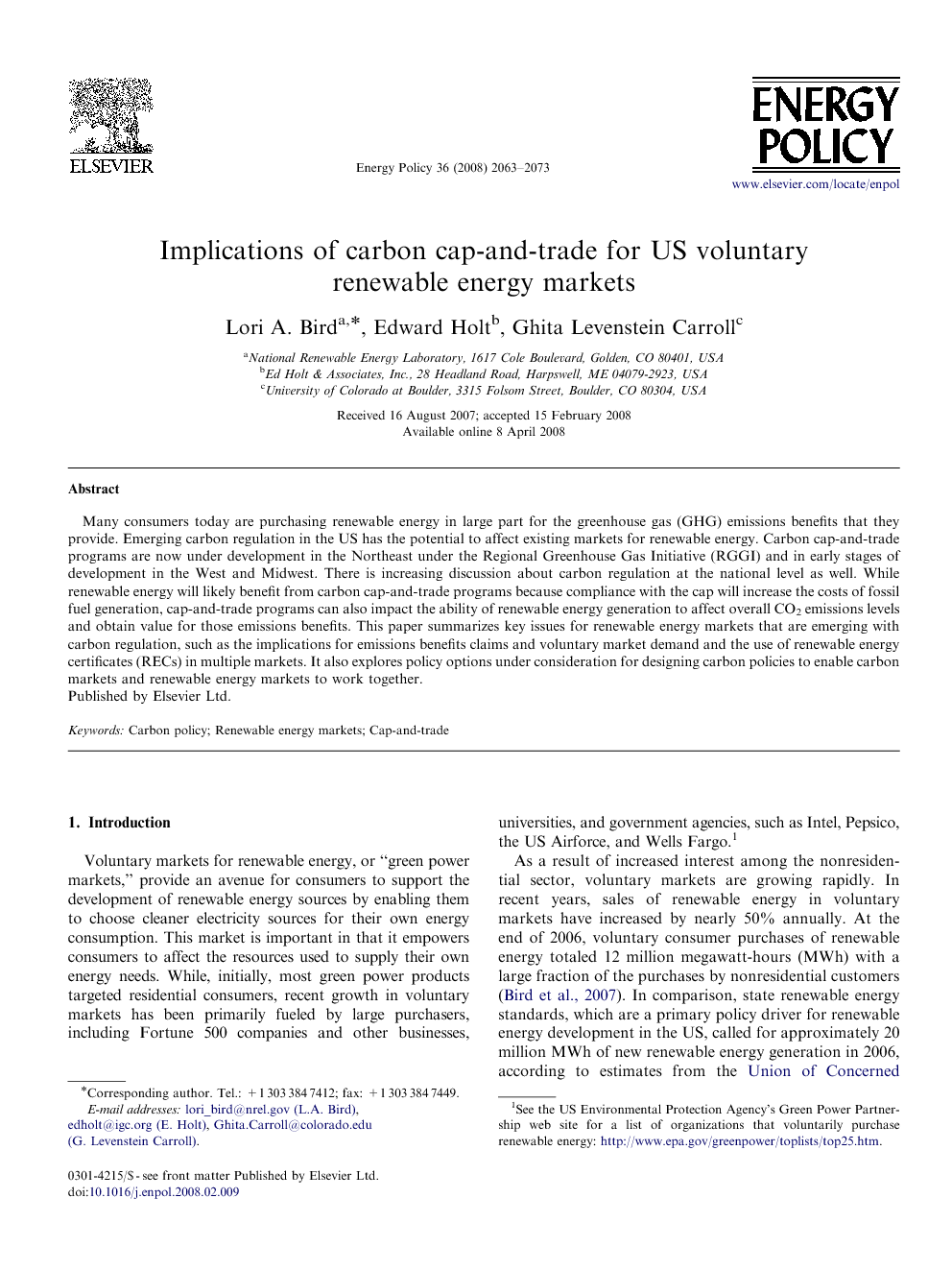 Voluntary markets for renewable energy have been growing rapidly in recent years, fueled partly by interest among businesses and consumers in reducing GHG emissions. Currently, these markets provide a convenient way in which consumers can support the development of renewable energy technologies and address the emissions associated with their own electricity consumption. In an era of carbon regulation, voluntary renewable energy markets can continue to play an important role because many consumers may be interested in supporting investment in renewable energy beyond what is required through mandates or other types of policy support. Some consumers may not be satisfied that emissions caps or other regulatory actions are sufficient to address the threats of global warming. In addition, many businesses and organizations may not be subject to carbon regulation, but may be interested in taking action to reduce the impacts of their own emissions footprints. Businesses and consumers may want to help support renewable energy today in order to help transform the technology to meet long-term emission-reduction goals. Voluntary markets for renewable energy may also be important because renewables provide advantages beyond no (or low) emissions, such as energy security and economic development benefits. The design of carbon regulations will have implications for the ability of consumers to affect emissions levels through their green power purchases, however. If cap-and-trade programs are designed and implemented so that renewable energy sources do not reduce CO2 levels below the level of the cap, then consumer purchases of renewable energy would not affect overall emissions levels, unless they purchased and retired an allowance separately. For residential consumers, in particular, this may be problematic, because they are unlikely to understand these complex market interaction issues and may believe that their purchases of green power from zero- or low-emitting renewable energy sources result in emission reductions. This could also reduce business and institutional interest in purchasing RECs to the extent that they are motivated by GHG benefits. REC marketers may still make claims that their product is “emissions-free”, however, this could be problematic under the NAAG Guidelines, as these claims might imply to consumers that by purchasing such energy, they are helping to reduce emissions. Under carbon cap and trade, both the methods for setting the emissions cap and for allocating allowances are important for emission-reduction claims. Allocating allowances to renewable energy generators (either through a set aside or output-based allocation) is one way to credit renewable generation with the emissions benefits they provide. A reduction in carbon emissions below the level of the cap can be achieved by retiring an allowance, ensuring that it is not sold to an emitter. A renewable energy marketer could convey an allowance with the sale of renewable energy or RECs, and the retirement of the allowance is a clear basis for making an emission-reduction claim. However, there is no guarantee that the allowances will remain bundled with the RECs, as generators will seek to maximize revenues in all available markets. Other approaches, such as reducing the cap or automatically retiring allowances to account for current and future renewable energy generation, would enable consumers to affect GHG emissions levels with their renewable energy purchases, but would not provide renewable energy generators the option of selling allowances in emissions markets. Thus, policy structures that are best suited for voluntary renewable energy markets are not necessarily the preferred policy options for renewable energy generators. In the absence of policies that would enable renewables to affect emissions levels, consumers could reduce emissions by purchasing a so-called “REC-plus” product in which an allowance would be purchased and retired on their behalf and bundled with renewable energy or RECs. Or a consumer could simply purchase carbon emission allowances without the renewable energy component. Either case would result in a clear, verifiable emission reduction and enable a strong claim. However, a REC-plus product would likely either increase the costs considerably to the end-use consumer, suppressing demand, or reduce the amount of revenue that would go to support renewable energy generation, which would reduce the ability of voluntary markets to support new renewable energy development. The latter approach of simply retiring an allowance would not necessarily lead to near-term support for renewable energy because efficiency improvements at fossil plants may dominate near-term compliance actions. Because of the substantial overlap in renewable energy and emissions markets, regulators and policymakers need to be cognizant of the policy-interaction issues and market implications of new and emerging policies. The voluntary renewable energy market is growing rapidly and provides a convenient and readily available mechanism for consumers to affect the impacts of their electricity consumption today. However, this market needs credibility, consistency, and the ability to articulate clear benefits in order to continue to provide consumers with a viable option for affecting change.