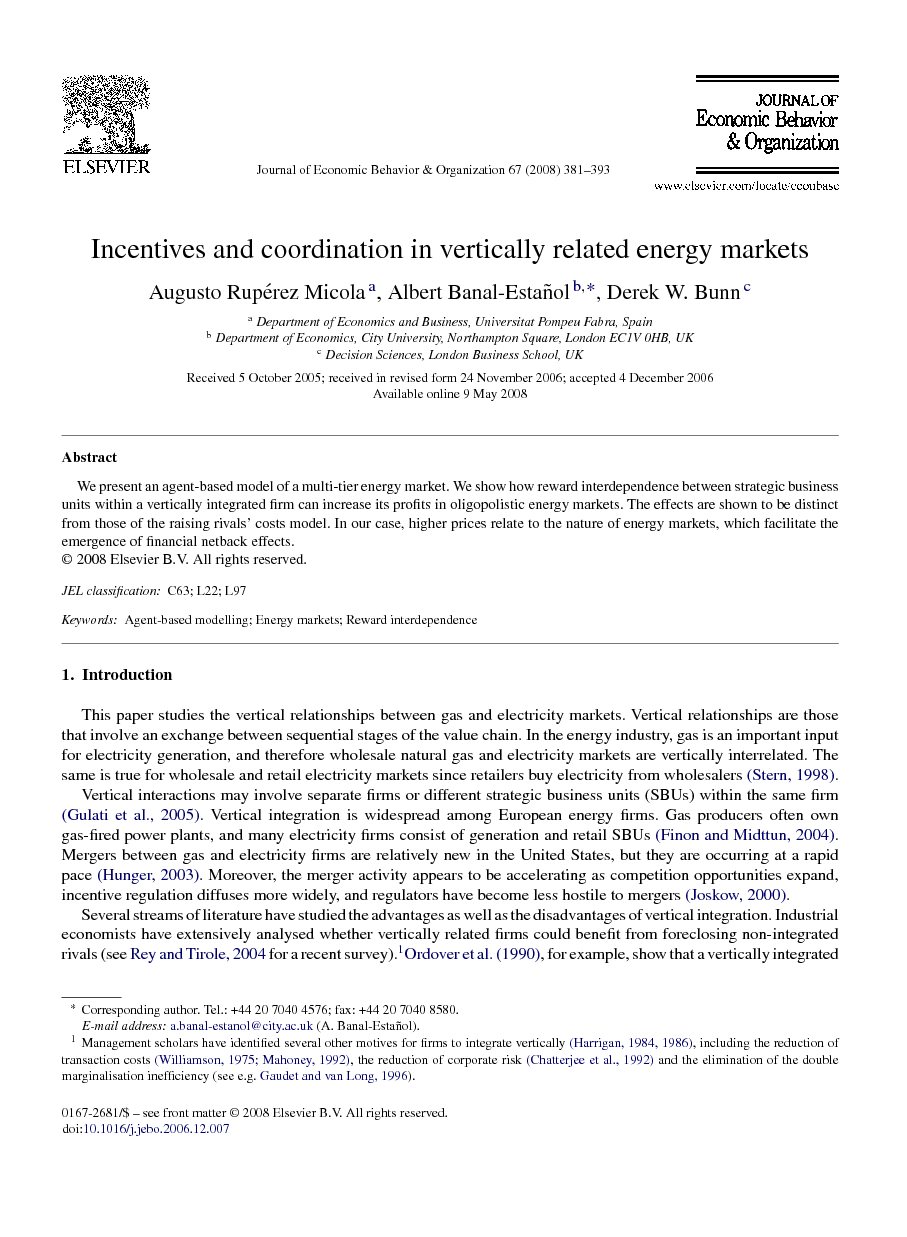 We present an agent-based model of a multi-tier energy market. We show how reward interdependence between strategic business units within a vertically integrated firm can increase its profits in oligopolistic energy markets. The effects are shown to be distinct from those of the raising rivals’ costs model. In our case, higher prices relate to the nature of energy markets, which facilitate the emergence of financial netback effects.

The existence of interdependences between vertically related SBUs has become a bedrock in the business strategy literature, yet we know relatively little about the forces shaping these interdependences and their effects. A set of agent-based simulations identifies one such effect in the de-regulated energy industry. Reward interdependences between SBUs lead to trading coordination and higher prices. Under tight reward interdependence structures, vertically integrated firms increase the scope for upstream profits. This leads to strategic behaviour with the superficial appearance of foreclosure, but based on a quite different principle. This paper adds to the preceding literature in at least three ways. Methodologically, we are not aware of any other multi-tier energy simulations driven by netback principles in the literature. The financial dependence between electricity and natural gas markets does not seem to be captured by the classical models of vertical foreclosure, where causal pricing relationships are sequential from the upstream to the downstream segment. The second contribution relates to the literature on the sources of vertical market power in the energy industry (e.g. Bushnell et al., 2005, Granitz and Klein, 1996 and Kühn and Machado, 2004). The simulations suggest a new mechanism to solve the puzzle of how vertical market power appears in some energy markets where it should not. The downstream unit submits higher bids and increases retail prices. As a result, the range of possible upstream prices also increases. Then, the upstream unit stays on the baseload part of the supply curve, increases its market share and allows its opponent to increase wholesale prices. Hence, vertical market power emerges in a compulsory, uniform price auction without trading internalisation or price discrimination. Thirdly, the research identifies a link between internal incentive structures, SBU behaviour and firm performance. Reward interdependence has been shown to be an instrument leading to market power via higher vertical SBU coordination. Ways in which reward interdependences can be articulated include direct bonuses and stock options, and casual evidence indicates that these are widespread in the energy industry. It is interesting to note that such reward interdependence contracts are internal to the firm and, hence, normally fall outside the scope for regulatory intervention. Whether firms use them explicitly as a way of aligning their interests to those of their SBU employees is an interesting question for future empirical work.