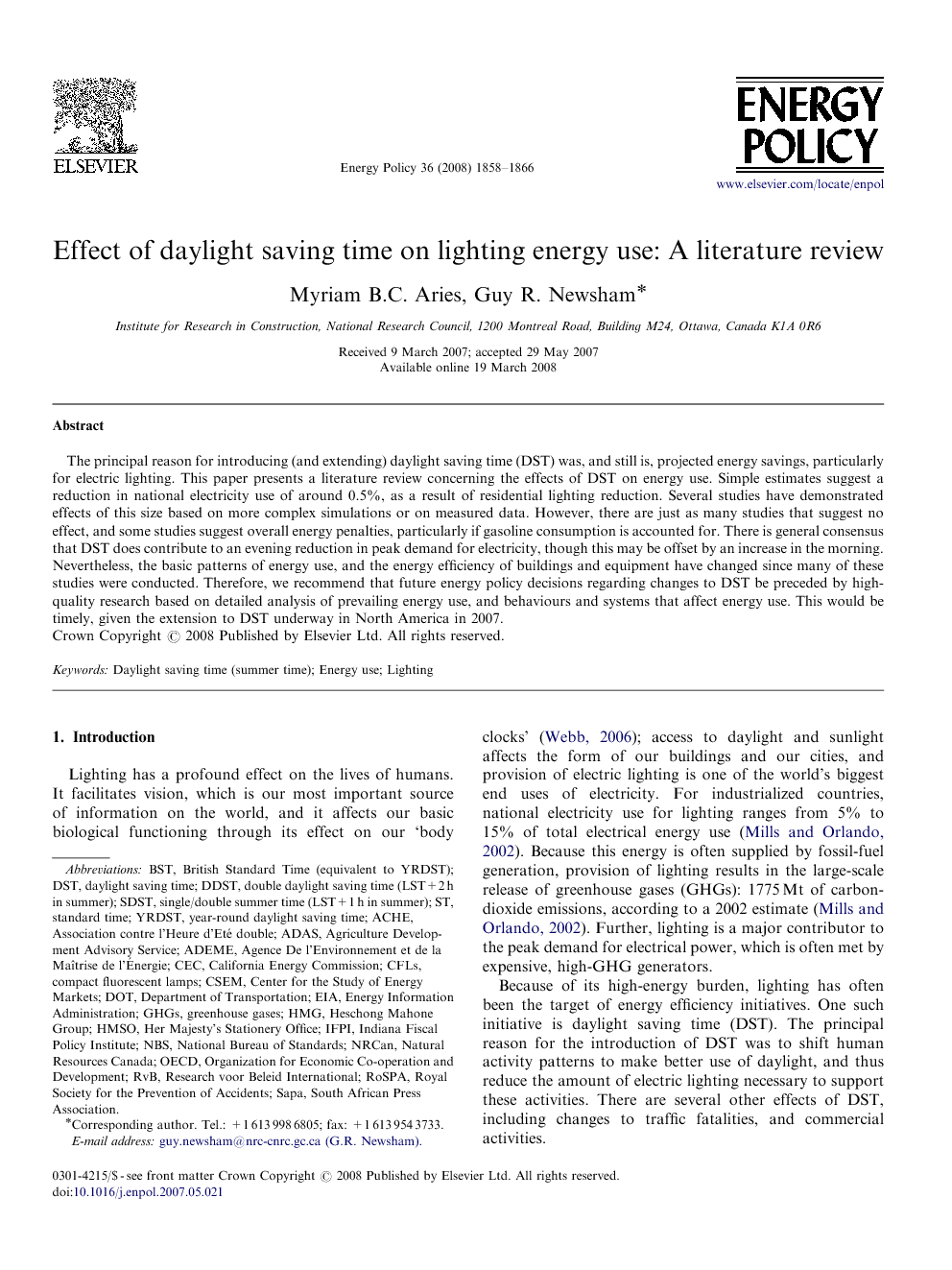 The principal reason for introducing (and extending) daylight saving time (DST) was, and still is, projected energy savings, particularly for electric lighting. This paper presents a literature review concerning the effects of DST on energy use. Simple estimates suggest a reduction in national electricity use of around 0.5%, as a result of residential lighting reduction. Several studies have demonstrated effects of this size based on more complex simulations or on measured data. However, there are just as many studies that suggest no effect, and some studies suggest overall energy penalties, particularly if gasoline consumption is accounted for. There is general consensus that DST does contribute to an evening reduction in peak demand for electricity, though this may be offset by an increase in the morning. Nevertheless, the basic patterns of energy use, and the energy efficiency of buildings and equipment have changed since many of these studies were conducted. Therefore, we recommend that future energy policy decisions regarding changes to DST be preceded by high-quality research based on detailed analysis of prevailing energy use, and behaviours and systems that affect energy use. This would be timely, given the extension to DST underway in North America in 2007.

Lighting has a profound effect on the lives of humans. It facilitates vision, which is our most important source of information on the world, and it affects our basic biological functioning through its effect on our ‘body clocks’ (Webb, 2006); access to daylight and sunlight affects the form of our buildings and our cities, and provision of electric lighting is one of the world's biggest end uses of electricity. For industrialized countries, national electricity use for lighting ranges from 5% to 15% of total electrical energy use (Mills and Orlando, 2002). Because this energy is often supplied by fossil-fuel generation, provision of lighting results in the large-scale release of greenhouse gases (GHGs): 1775 Mt of carbon-dioxide emissions, according to a 2002 estimate (Mills and Orlando, 2002). Further, lighting is a major contributor to the peak demand for electrical power, which is often met by expensive, high-GHG generators. Because of its high-energy burden, lighting has often been the target of energy efficiency initiatives. One such initiative is daylight saving time (DST). The principal reason for the introduction of DST was to shift human activity patterns to make better use of daylight, and thus reduce the amount of electric lighting necessary to support these activities. There are several other effects of DST, including changes to traffic fatalities, and commercial activities. Beginning in 2007, DST—or summer time in Europe1—was extended by 1 month in the US and Canada (with some exceptions). DST started on the second Sunday in March and will end on the first Sunday in November. The new begin and end dates are set in the 2005 US Energy Policy Act (Energy Policy Act, 2005). To investigate the influence of the extension, the Act included the commitment that “not later than nine months after the effective date of the 2007 DST, the Secretary will report to the US Congress on the impact of the extension on energy use in the US”. Depending on the results, the Congress retains the right to revert DST back to the 2005 time schedules. Canada followed the US in extending DST; this decision may have been more about avoiding chaos in financial and commercial areas due to lack of clock synchronization, than about expectations of energy savings (Beauregard-Tellier, 2005). In Europe, agreements are signed until 2007 (Fontaine and Ringholm, 2001). The European Commission will submit a report in 2007 with suitable proposals for continuation or change (Fontaine and Ringholm, 2001; De Bruijn and Van Poppel, 2005; EurLex, 2000). North America and Europe are not the only areas in the world to observe DST. For example, on the African continent, Egypt, Tunisia, and Namibia have DST. Israel, Palestine, and Jordan observe DST, and both Australia and New Zealand introduced DST to save energy. Mexico has observed DST since 1996, and Cuba, Honduras, and Guatemala introduced DST in 2006. The purpose of this paper is to review the literature concerning the effects of DST on energy use, particularly with regard to lighting, and to derive implications for energy policy. First, a short overview of the historical background of DST is given. Second, we give some simplified estimates of effect size, with a focus on residential lighting. Third, research conducted between 1968 and 2007 is discussed (mainly in chronological order). This research was conducted to better estimate likely effects, or to demonstrate effects from measured energy use data. We also briefly describe some of the research into the non-energy effects of DST. Finally, a general discussion with regard to the available knowledge, better effect estimates, and design possibilities is presented.

Based on the literature review, conclusions about the effect of daylight saving time (DST) on (lighting) energy use are as follows: • The existing knowledge about how DST affects energy use is limited, incomplete, or contradictory. Many conclusions are the result of expectations alone, are based on constrained assumptions, or are older than 25 years. • Economical, geographical, and climatological factors have major effects on electricity end use. Studies should always correct for such factors. • Energy use and human behavioural patterns have changed substantially since the first introduction of DST. These are likely to have a major influence on the effect of DST on energy use. • Even if overall energy use is unchanged by DST, hourly energy use is changed, affecting electricity demand profiles. • Effects of DST on lighting energy use are mainly noticeable in residential buildings. Given the difficulties of separating DST effects from other effects in system-wide energy data, we suggest that the best prospect for progress in definitively evaluating the effect of DST on energy use is simulation. Such simulation should include a variety of building types in representative climates and latitudes, and should address both lighting and thermal energy effects. Behavioural models for light switching and thermostat setting should be included where appropriate. Interactions between building types should be addressed; for example, lower occupancy of homes on lighter evenings might mean higher occupancy in shopping malls. All assumptions should be supported by empirical data, and the simulations should also be calibrated and validated by empirical data. Further, simulations should include not only existing descriptions of building occupancy patterns, insulation values, equipment efficiencies and controls, but also a variety of future scenarios. Finally, building energy impacts should be weighed against the effect on transportation energy. We recommend that policy-makers undertake a comprehensive, parametric study of this kind to inform decisions concerning which DST options should be adopted in the future, and for what reasons. This should include a comparison between the costs and benefits of DST vs. other energy efficiency or demand response programs. It would also be interesting to explore aspects of residential design that may contribute to a delay in switching on lighting in the evening, analogous to DST effects. For example, one might expect skylights, or other design features that enhance daylight penetration, to result in electric light use being delayed.