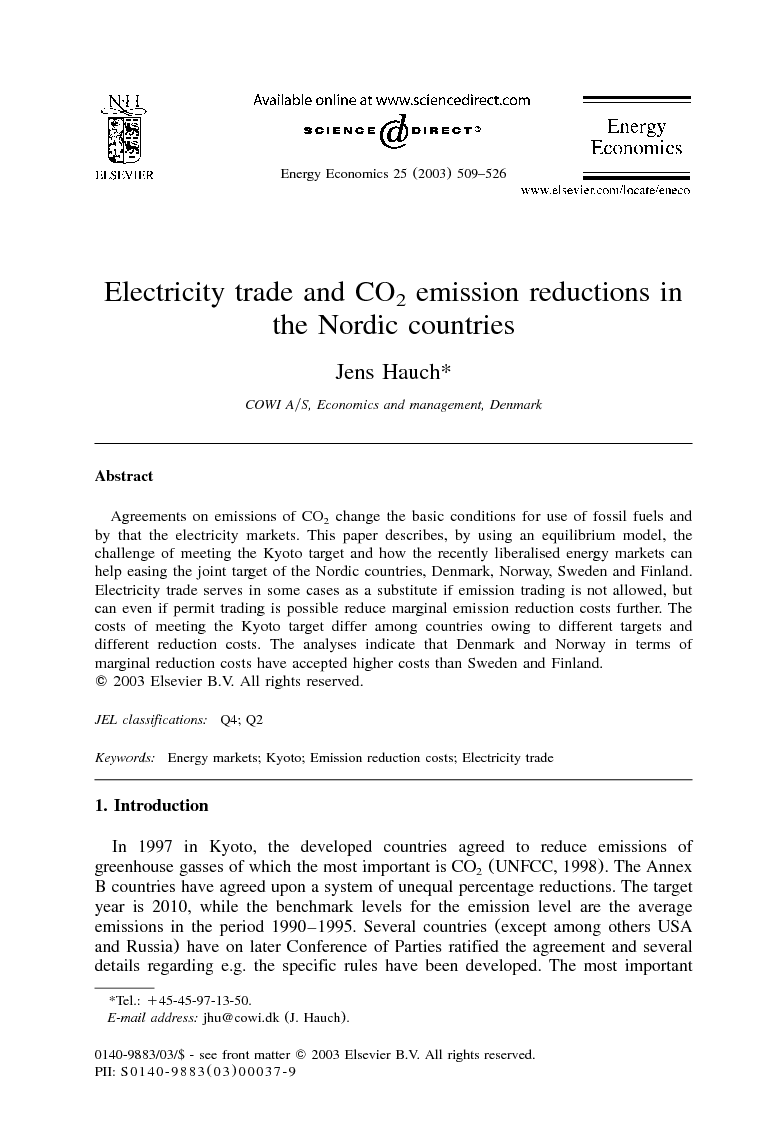 Agreements on emissions of CO2 change the basic conditions for use of fossil fuels and by that the electricity markets. This paper describes, by using an equilibrium model, the challenge of meeting the Kyoto target and how the recently liberalised energy markets can help easing the joint target of the Nordic countries, Denmark, Norway, Sweden and Finland. Electricity trade serves in some cases as a substitute if emission trading is not allowed, but can even if permit trading is possible reduce marginal emission reduction costs further. The costs of meeting the Kyoto target differ among countries owing to different targets and different reduction costs. The analyses indicate that Denmark and Norway in terms of marginal reduction costs have accepted higher costs than Sweden and Finland.

Calculation of abatement cost curves for the Nordic countries, Denmark, Norway, Sweden and Finland, reveals different reduction costs. Finland and Denmark have larger reduction potentials than Norway and Sweden. If a 20% Nordic emission reduction is considered, the saving potential from emission trading is substantial compared with a situation where the countries undertake equal percentage reductions. International electricity trading can reduce emission reduction costs even when emission trading is permitted. Largest savings from electricity trading are found for emission targets of medium size. The Kyoto agreement is analysed for Norway, Denmark, Finland and Sweden. For the target year, 2010, an equilibrium price of CO2 emission permits of €60 per ton is found. The price will increase to a level above €100 per ton in 2020. This is caused by increasing economic activity that, ceteris paribus, increases the demand for fossil fuel and electricity. The emission constraints are met through a combination of reductions in use of fossil fuels in final consumption and changes in the technology choice in electricity and district heating production. Finland and Sweden export emission permits. This indicates that Finland and Sweden have managed to make a good bargain in Kyoto, if marginal reduction costs at the target level are used as an indication and the total emission target is taken as given. Electricity trade plays an important role in minimizing the costs of emission reductions under the Kyoto agreement. The Kyoto agreement changes the trade pattern dramatically even if trading of emission permits is possible.