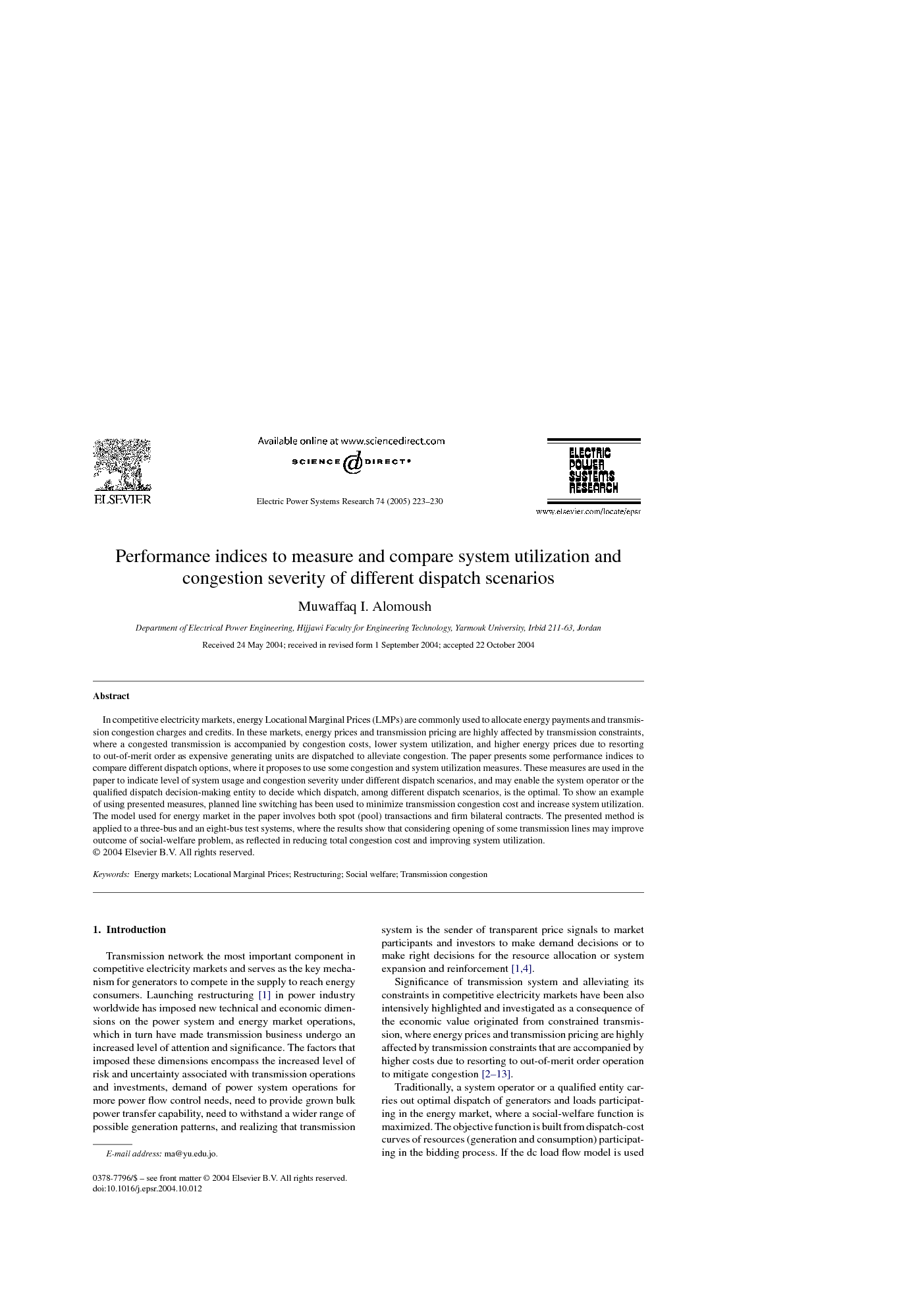 In competitive electricity markets, energy Locational Marginal Prices (LMPs) are commonly used to allocate energy payments and transmission congestion charges and credits. In these markets, energy prices and transmission pricing are highly affected by transmission constraints, where a congested transmission is accompanied by congestion costs, lower system utilization, and higher energy prices due to resorting to out-of-merit order as expensive generating units are dispatched to alleviate congestion. The paper presents some performance indices to compare different dispatch options, where it proposes to use some congestion and system utilization measures. These measures are used in the paper to indicate level of system usage and congestion severity under different dispatch scenarios, and may enable the system operator or the qualified dispatch decision-making entity to decide which dispatch, among different dispatch scenarios, is the optimal. To show an example of using presented measures, planned line switching has been used to minimize transmission congestion cost and increase system utilization. The model used for energy market in the paper involves both spot (pool) transactions and firm bilateral contracts. The presented method is applied to a three-bus and an eight-bus test systems, where the results show that considering opening of some transmission lines may improve outcome of social-welfare problem, as reflected in reducing total congestion cost and improving system utilization.

Transmission network the most important component in competitive electricity markets and serves as the key mechanism for generators to compete in the supply to reach energy consumers. Launching restructuring [1] in power industry worldwide has imposed new technical and economic dimensions on the power system and energy market operations, which in turn have made transmission business undergo an increased level of attention and significance. The factors that imposed these dimensions encompass the increased level of risk and uncertainty associated with transmission operations and investments, demand of power system operations for more power flow control needs, need to provide grown bulk power transfer capability, need to withstand a wider range of possible generation patterns, and realizing that transmission system is the sender of transparent price signals to market participants and investors to make demand decisions or to make right decisions for the resource allocation or system expansion and reinforcement [1] and [4]. Significance of transmission system and alleviating its constraints in competitive electricity markets have been also intensively highlighted and investigated as a consequence of the economic value originated from constrained transmission, where energy prices and transmission pricing are highly affected by transmission constraints that are accompanied by higher costs due to resorting to out-of-merit order operation to mitigate congestion [2], [3], [4], [5], [6], [7], [8], [9], [10], [11], [12] and [13]. Traditionally, a system operator or a qualified entity carries out optimal dispatch of generators and loads participating in the energy market, where a social-welfare function is maximized. The objective function is built from dispatch-cost curves of resources (generation and consumption) participating in the bidding process. If the dc load flow model is used [14], the dispatch problem respects lower and upper limits of resources participating in the bidding process and flow limits of transmission lines. Based on the solution of this problem, the optimal dispatch of each resource, and energy LMPs are determined. If constrained transmission occurs in this process, LMP values vary from bus to bus, and consequently, congestion costs are imposed on market participants [1], [2], [3], [4], [7], [8] and [9]. If loads are participating in the bidding process, i.e., if loads are elastic, total optimal load served and total optimal generation would be different from those obtained from unconstrained dispatch. The unconstrained dispatch is the dispatch that assumes transmission lines have ample capacity to serve both connected generators and loads, where no congestion takes place and all LMP values are the same. The dispatch that gives optimal values as those of the unconstrained dispatch is the best dispatch that system operator wishes to face as it reflects the best system utilization. Unfortunately, this congestion-free situation is not always obtained, and an optimal dispatch is always accompanied by congestion costs, different energy prices and less system utilization. The ON and OFF statuses of a line can be seen as control variables that can be utilized in the optimal dispatch decision process. As will be seen in the presented test cases, opening certain lines may give better results compared to the outcome of traditional optimal dispatch process that assumes all lines are in the ON status. Therefore, this paper proposes to consider line status in the dispatch process to minimize transmission congestion cost and maximize system usage. Even though opening of certain lines may improve the congestion problems, it may unfortunately affect other unconsidered issues, such as system stability. Any line opening that is accompanied by a low congestion cost, congestion-free dispatch, or leads to a maximization of system usage, to be a feasible and a meaningful dispatch alternative, should not endanger system stability or security, and therefore, should pass the stability and security measures adopted by the system operators who is maintaining the integrity of the power system. Therefore, the system operator has to examine the candidate line openings for such problems. For example, system operators may resort to a full ac load flow modeling and add constraints of steady-state stability limits [15], [16] and [17] to the proposed formulation and other constraints that guarantee system security. The formulation proposed in the paper uses the dc load flow modeling of the power system [14] and adopts the model for energy market that involves both spot transactions and firm bilateral contracts [1]. The results of the two test systems in the paper will show that considering line opening may improve social-welfare outcome as reflected by improving system utilization and reducing total congestion cost.

Constrained transmission considerably impacts energy prices and transmission pricing as indicated by large changes in LMPs, which are traditionally used in restructured electricity markets to price energy, allocate transmission congestion charges, and determine participant payments. The large changes in LMPs associated with congestion situations are due to resorting to out-of-merit order of generating units and elastic demands. Generator and demand schedules and LMPs in a competitive market are determined by solving the social-welfare problem. Ideally, an optimal and congestion-free dispatch is the dispatch that gives results similar to the unconstrained dispatch with equal LMP values at all system buses and all line flows are below limits. However, a traditional optimization problem solved for the social-welfare problem usually gives different LMP values at system buses, due to unavailable capacity of transmission lines, which is accompanied by considerable transmission congestion charges and unfavorite degree of system utilization. The paper has introduced some performance indices to compare different dispatch options, where it has proposed some congestion and system utilization measures. These measures have been used in the paper to indicate system usage and congestion severity under different dispatch scenarios, and may enable the dispatch decision-making entity (the system operator) to decide which dispatch is optimal based on predetermined preferences. The paper has adopted the model for energy market that involves both spot transactions and firm bilateral contracts. The method presented in this paper has been applied to a three-bus and an eight-bus test systems. The results show that considering opening of some transmission lines may improve social-welfare outcomes and may improve system utilization.