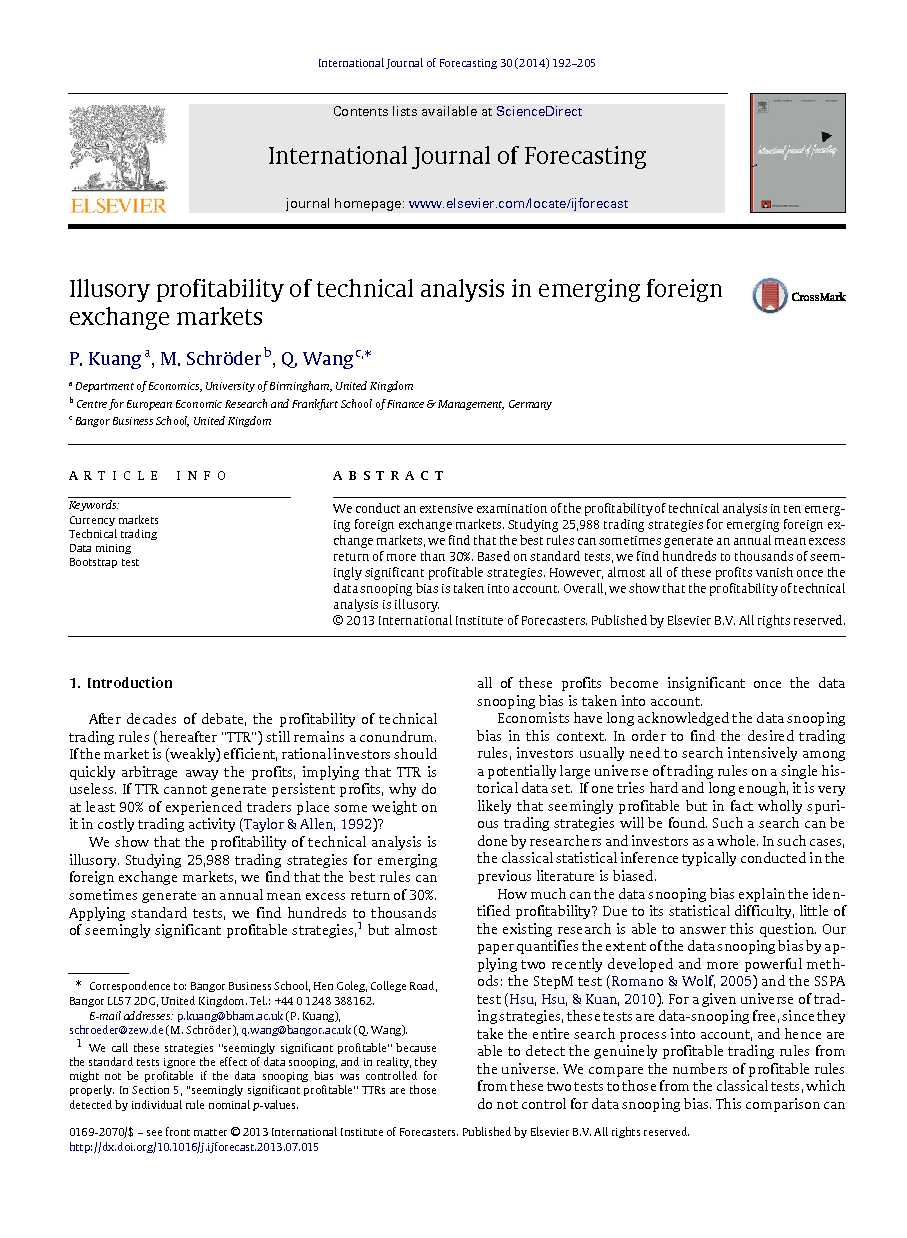 We conduct an extensive examination of the profitability of technical analysis in ten emerging foreign exchange markets. Studying 25,988 trading strategies for emerging foreign exchange markets, we find that the best rules can sometimes generate an annual mean excess return of more than 30%. Based on standard tests, we find hundreds to thousands of seemingly significant profitable strategies. However, almost all of these profits vanish once the data snooping bias is taken into account. Overall, we show that the profitability of technical analysis is illusory.

After decades of debate, the profitability of technical trading rules (hereafter “TTR”) still remains a conundrum. If the market is (weakly) efficient, rational investors should quickly arbitrage away the profits, implying that TTR is useless. If TTR cannot generate persistent profits, why do at least 90% of experienced traders place some weight on it in costly trading activity (Taylor & Allen, 1992)? We show that the profitability of technical analysis is illusory. Studying 25,988 trading strategies for emerging foreign exchange markets, we find that the best rules can sometimes generate an annual mean excess return of 30%. Applying standard tests, we find hundreds to thousands of seemingly significant profitable strategies,1 but almost all of these profits become insignificant once the data snooping bias is taken into account. Economists have long acknowledged the data snooping bias in this context. In order to find the desired trading rules, investors usually need to search intensively among a potentially large universe of trading rules on a single historical data set. If one tries hard and long enough, it is very likely that seemingly profitable but in fact wholly spurious trading strategies will be found. Such a search can be done by researchers and investors as a whole. In such cases, the classical statistical inference typically conducted in the previous literature is biased. How much can the data snooping bias explain the identified profitability? Due to its statistical difficulty, little of the existing research is able to answer this question. Our paper quantifies the extent of the data snooping bias by applying two recently developed and more powerful methods: the StepM test (Romano & Wolf, 2005) and the SSPA test (Hsu, Hsu, & Kuan, 2010). For a given universe of trading strategies, these tests are data-snooping free, since they take the entire search process into account, and hence are able to detect the genuinely profitable trading rules from the universe. We compare the numbers of profitable rules from these two tests to those from the classical tests, which do not control for data snooping bias. This comparison can show how many profits are genuine and how many are spurious, which provides richer information about the extent of the data snooping bias than only knowing whether the best performing rule has a true predictive ability or not (as in the Reality Check of White, 2000, and the SPA test of Hansen, 2005). Thus, we are able to make the extent of the data snooping bias more transparent. Our study provides a comprehensive test of trading rule profitability across 25,988 trading rules. The majority of these rules are popular among professional traders, but have not been studied in the literature for emerging FX markets. Hence, our paper provides a more complete picture regarding the performance of trading rules and market efficiency for these markets. The large universe of trading rules raises concerns about the power of the tests. However, we show that our major conclusions continue to hold when one is testing with smaller universes. A study of TTR profitability for emerging FX markets is of interest in its own right. Factors such as spot exchange rate movements, interest rate differentials and transaction costs in emerging markets can all contribute to TTR profitability differently from their developed FX market counterparts. In addition, emerging markets have stricter regulations and capital controls, which makes it more difficult for speculation to arbitrage away the profits. The remainder of this paper is structured as follows. Section 2 provides a short literature review. Section 3 presents the universe of trading rules. Section 4 discusses the empirical methodology. Section 5 briefly documents our data and empirical findings. Section 6 concludes. Finally, a detailed documentation of the trading rules considered is provided in the Appendix.

There is substantial empirical evidence documenting the success of the TTR in various markets, especially in FX markets. However, critics cite data snooping as a major cause of this anomaly. The aim of this paper is to quantify the extent of the data snooping bias in technical trading rule profitability. We test trading rule performances across 25,988 trading rules for the emerging foreign exchange markets, and find that nearly all apparent successes of TTR in our trading rule universe are in fact the result of data mining bias. Our findings continue to hold when we consider different transaction costs, sub-sample analysis, and various reduced universes of trading rules. Our empirical results also provide the first comprehensive evidence of profitability of the technical trading rule for 10 emerging countries’ exchange rates. The universe of our trading rules includes simple rules, charting rules with kernel smoothing and complex trading rules. Although they are popular among professional traders, the majority of these trading rules have not been studied in the literature for emerging FX markets. Our paper depicts a more complete picture of the performances of trading rules and market efficiency for emerging foreign exchange markets. Overall, we find rare evidence against the efficiency of emerging FX markets. Investors have to be careful when applying TTR to these markets, given the substantial data snooping bias that is likely to be involved. Further research, such as the investigation of economic explanations for trading rules’ profitability or the determinants of its cross country variation, is also needed, to account for the danger of data snooping.