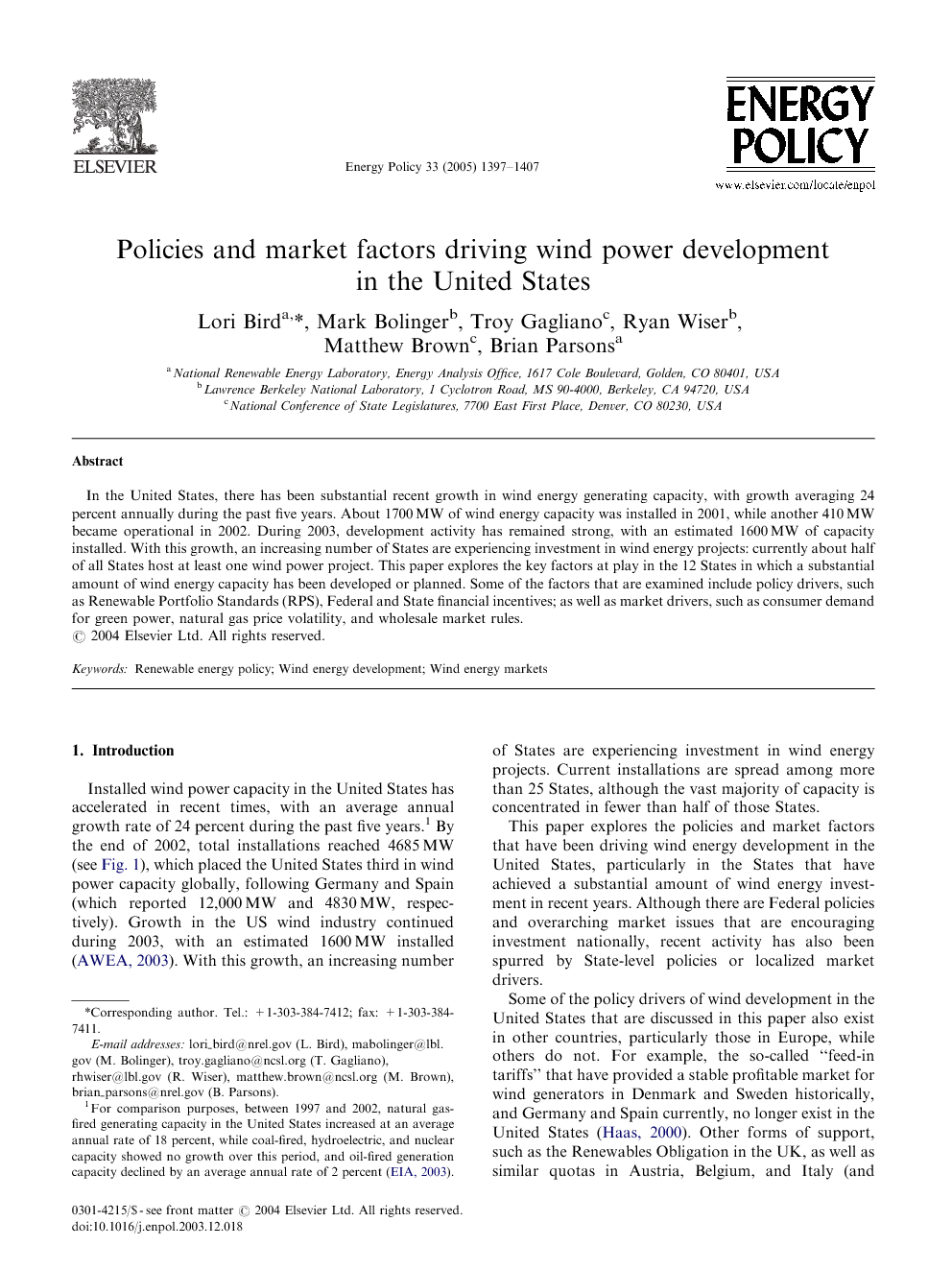 In the United States, there has been substantial recent growth in wind energy generating capacity, with growth averaging 24 percent annually during the past five years. About 1700 MW of wind energy capacity was installed in 2001, while another 410 MW became operational in 2002. During 2003, development activity has remained strong, with an estimated 1600 MW of capacity installed. With this growth, an increasing number of States are experiencing investment in wind energy projects: currently about half of all States host at least one wind power project. This paper explores the key factors at play in the 12 States in which a substantial amount of wind energy capacity has been developed or planned. Some of the factors that are examined include policy drivers, such as Renewable Portfolio Standards (RPS), Federal and State financial incentives; as well as market drivers, such as consumer demand for green power, natural gas price volatility, and wholesale market rules.

Installed wind power capacity in the United States has accelerated in recent times, with an average annual growth rate of 24 percent during the past five years.1 By the end of 2002, total installations reached 4685 MW (see Fig. 1), which placed the United States third in wind power capacity globally, following Germany and Spain (which reported 12,000 MW and 4830 MW, respectively). Growth in the US wind industry continued during 2003, with an estimated 1600 MW installed (AWEA, 2003). With this growth, an increasing number of States are experiencing investment in wind energy projects. Current installations are spread among more than 25 States, although the vast majority of capacity is concentrated in fewer than half of those States. This paper explores the policies and market factors that have been driving wind energy development in the United States, particularly in the States that have achieved a substantial amount of wind energy investment in recent years. Although there are Federal policies and overarching market issues that are encouraging investment nationally, recent activity has also been spurred by State-level policies or localized market drivers. Some of the policy drivers of wind development in the United States that are discussed in this paper also exist in other countries, particularly those in Europe, while others do not. For example, the so-called “feed-in tariffs” that have provided a stable profitable market for wind generators in Denmark and Sweden historically, and Germany and Spain currently, no longer exist in the United States (Haas, 2000). Other forms of support, such as the Renewables Obligation in the UK, as well as similar quotas in Austria, Belgium, and Italy (and planned for Denmark and Sweden) closely resemble the renewables portfolio standard (RPS) that has taken hold at the State level in the United States (Reiche and Bechberger, 2004). Finally, Europe's aggressive targets for renewables deployment are driven in large part by its strong stance on carbon abatement and adoption of the Kyoto protocol, whereas the United States, which at the Federal level has opted to encourage voluntary emissions reductions rather than to ratify the Kyoto protocol, has so far not explicitly linked policy support for renewables with carbon policy (though some State governments are beginning to move in this direction, and consumers who voluntarily purchase renewable energy often do so out of concern for carbon emissions). This paper proceeds as follows. We first look briefly at Federal policies and broad market issues driving wind development in the United States, and then focus more narrowly on State-specific experience. We provide brief discussions of the drivers for wind development in a dozen leading States—California, Colorado, Iowa, Kansas, Minnesota, New York, Oregon, Pennsylvania, Texas, Washington, West Virginia, and Wyoming. Finally, we conclude with a discussion of the key lessons that may be transferable to other States, regions, or countries.