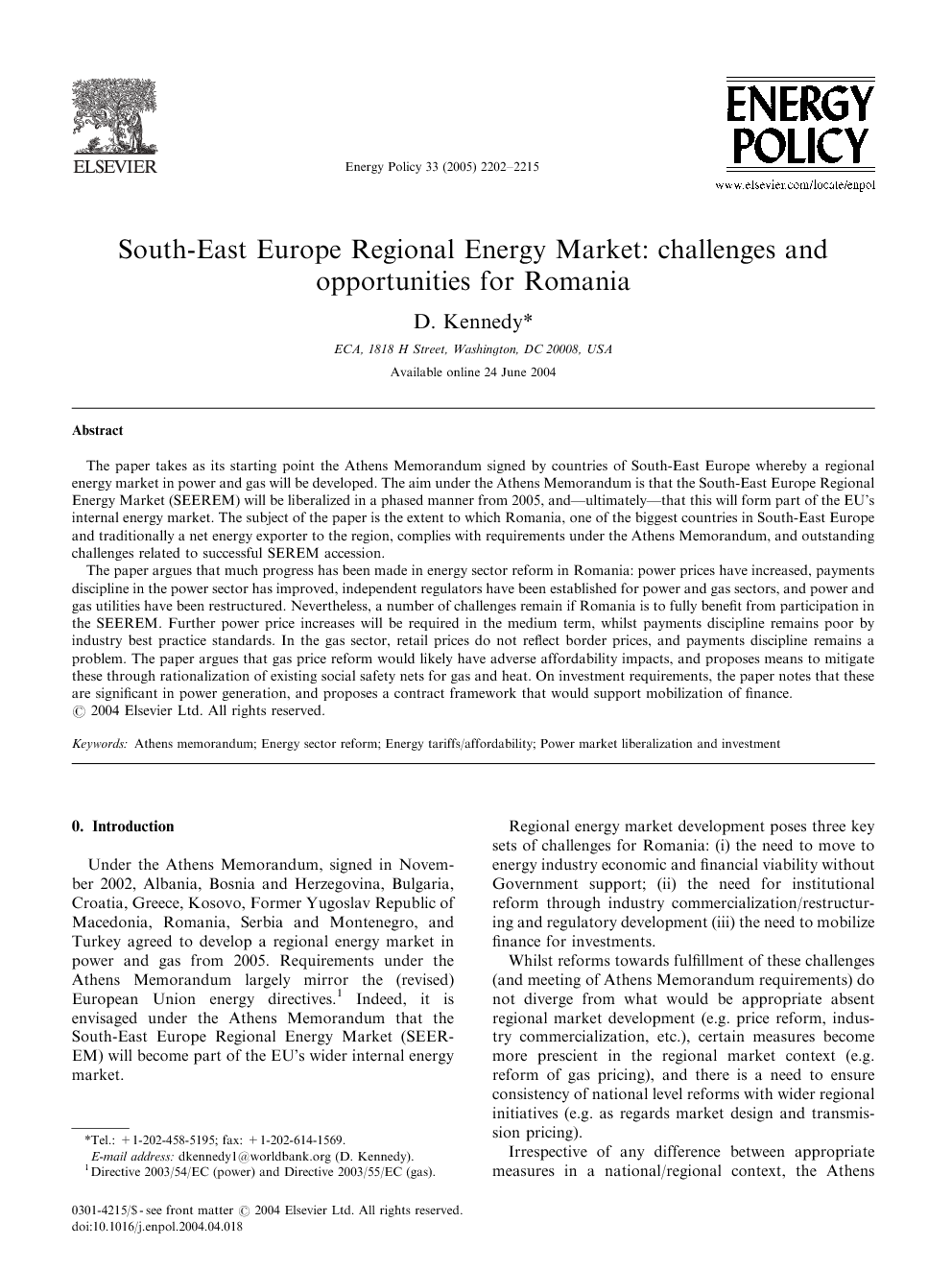 The paper takes as its starting point the Athens Memorandum signed by countries of South-East Europe whereby a regional energy market in power and gas will be developed. The aim under the Athens Memorandum is that the South-East Europe Regional Energy Market (SEEREM) will be liberalized in a phased manner from 2005, and—ultimately—that this will form part of the EU's internal energy market. The subject of the paper is the extent to which Romania, one of the biggest countries in South-East Europe and traditionally a net energy exporter to the region, complies with requirements under the Athens Memorandum, and outstanding challenges related to successful SEREM accession. The paper argues that much progress has been made in energy sector reform in Romania: power prices have increased, payments discipline in the power sector has improved, independent regulators have been established for power and gas sectors, and power and gas utilities have been restructured. Nevertheless, a number of challenges remain if Romania is to fully benefit from participation in the SEEREM. Further power price increases will be required in the medium term, whilst payments discipline remains poor by industry best practice standards. In the gas sector, retail prices do not reflect border prices, and payments discipline remains a problem. The paper argues that gas price reform would likely have adverse affordability impacts, and proposes means to mitigate these through rationalization of existing social safety nets for gas and heat. On investment requirements, the paper notes that these are significant in power generation, and proposes a contract framework that would support mobilization of finance.

Under the Athens Memorandum, signed in November 2002, Albania, Bosnia and Herzegovina, Bulgaria, Croatia, Greece, Kosovo, Former Yugoslav Republic of Macedonia, Romania, Serbia and Montenegro, and Turkey agreed to develop a regional energy market in power and gas from 2005. Requirements under the Athens Memorandum largely mirror the (revised) European Union energy directives.1 Indeed, it is envisaged under the Athens Memorandum that the South-East Europe Regional Energy Market (SEEREM) will become part of the EU's wider internal energy market. Regional energy market development poses three key sets of challenges for Romania: (i) the need to move to energy industry economic and financial viability without Government support; (ii) the need for institutional reform through industry commercialization/restructuring and regulatory development (iii) the need to mobilize finance for investments. Whilst reforms towards fulfillment of these challenges (and meeting of Athens Memorandum requirements) do not diverge from what would be appropriate absent regional market development (e.g. price reform, industry commercialization, etc.), certain measures become more prescient in the regional market context (e.g. reform of gas pricing), and there is a need to ensure consistency of national level reforms with wider regional initiatives (e.g. as regards market design and transmission pricing). Irrespective of any difference between appropriate measures in a national/regional context, the Athens Memorandum provides a benchmark for the energy sector reform process in Romania. This benchmark is highly relevant in the Romanian context given the country's aspirations towards EU accession and to become a major player in the SEEREM. The need for Romania's compliance with the Athens Memorandum thus provides one motivation for this paper. Another motivation for the paper is to illustrate country level reforms required to support regional energy market development. For example, establishment of a regional power market in a transition economy/emerging market context is unlikely to succeed without country level tariff reform, regulatory reform, etc. The intention in the paper is to illustrate to other countries in South-East Europe (SEE) Romania's response to challenges posed by regional market development. It is hoped that analysis of the Romanian experience would also be valuable in the context of other current regional energy market initiatives, for example, in South Africa, Indochina, Central America, and South America. The paper assesses Romanian power, gas and heat reform in the context of regional energy market development. The paper discusses the current extent of compliance with requirements under the Athens Memorandum, and outlines outstanding challenges if Romania is to be a successful player in the regional market, maintaining and increasing (economic) net exports to neighboring countries. The main messages in the paper are that effective tariffs—reflecting tariffs and payments discipline—are still below cost recovery levels in the Romanian energy sector. In the power sector, power tariffs will have to increase over time to support finance of investments. Collections remains a problem in the power sector, with failure to pay by large state owned enterprises, and a high degree of non-cash settlement. In the gas sector, the main challenge is to increase tariffs to reflect border prices. Though some progress has been made here, further increases are necessary. On the institutional reform side, Romania has made good progress. Outstanding challenges are to further commercialize both the gas and power sectors, through private sector participation where this is feasible. Regarding investments, major rehabilitation of power generation assets is required in the medium term. Failure to secure investments could see Romania go from its current status as a net exporter of power to SEE, to a country dependent on imports/suffering from insecurity of supply. The paper starts with an overview of the Athens Memorandum establishing the SEEREM. Next energy industry financial viability is considered. In addition to looking at power and gas sector effective tariffs, the impact of gas price increases on heat sector affordability is assessed. The paper then covers progress in institutional reform as required under the Athens Memorandum, and outlines remaining challenges. The paper finishes with a discussion of investments needed in the power sector, together with the contract framework for securing investment finance.

This paper has argued that whilst good progress has been made on power tariff reform, further increases will be required as investments are undertaken. In the gas sector, though there have been significant price increases, further large increases are required in order to meet import parity. The challenge for the Government is make good on its commitment in the Road Map to move to import parity in the medium term. Regarding affordability consequences of tariff increases, these are unlikely to be problematic in the power sector, where expenditure is small relative to income, and where an effective social safety net is in place. Gas price increases, on the other hand, are likely to strain affordability in the gas and heat sectors. Targeted social safety nets for gas and heat will require additional financing if affordability risks are to be mitigated; part of the increased finance could be unlocked through rationalization of the current blanket subsidy to the district heating sector. Payments discipline remains a problem in power and gas, notwithstanding increased collections in recent years. In order that collections are increased to levels which would allow energy industry financial viability on a sustained basis, Government action is required, allowing disconnection of large state owned enterprises, and through developing industrial policy for their restructuring/privatization. On institutional reform, Romania has progressed further than all SEEREM countries bar Croatia in regulatory development, and further than all countries bar Bulgaria on industry restructuring. In terms of power market development and gas industry regulation/restructuring, Romania has outperformed all SEEREM countries. Outstanding challenges are to build on the track record in regulation through continuing to implement price increases as necessary in power and gas, and to move towards introduction of tariff setting on a long-term basis. On industry restructuring, challenges include the need for commercialization of generation subsidiaries, and introduction of the private sector in the unbundled gas structure. On market design, where proposals are consistent with those for the SEEREM, challenges relate to detailed implementation issues. On investment, Romania's continued status as a net power exporter to SEE will require large-scale generation rehabilitation. The challenge here is to develop a framework to secure investment that is consistent with the objective to liberalize the power market. The paper argues that capacity contracts could provide a solution here, and that these would be consistent with proposed market design in Romania. In summary, if Romania is able to meet challenges in effective energy tariffs, further institutional reform, and investment, this should bring competitively priced energy domestically, and export opportunities, thus yielding economic benefits in a regional energy market context and a regional market context more generally.