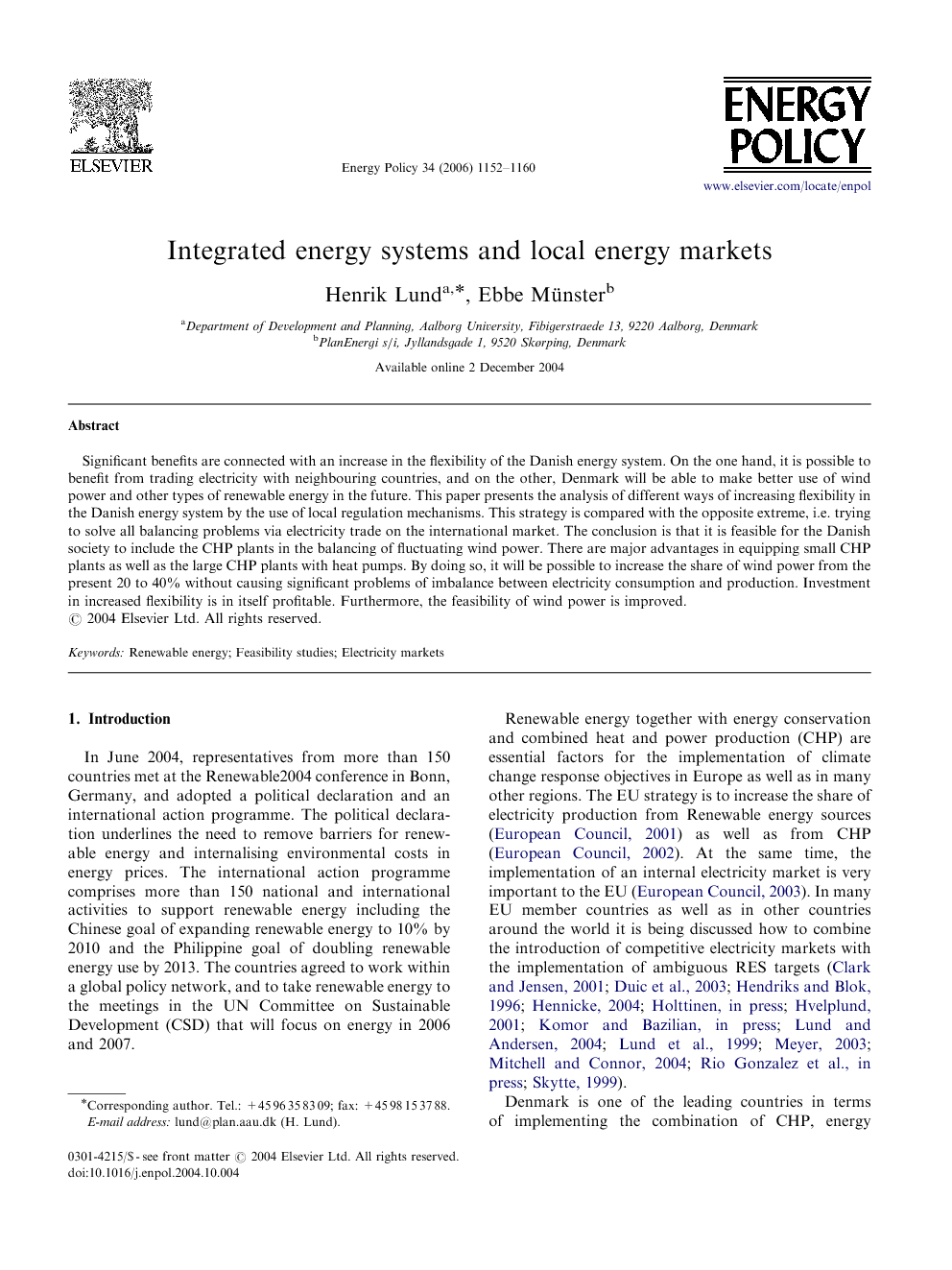 Significant benefits are connected with an increase in the flexibility of the Danish energy system. On the one hand, it is possible to benefit from trading electricity with neighbouring countries, and on the other, Denmark will be able to make better use of wind power and other types of renewable energy in the future. This paper presents the analysis of different ways of increasing flexibility in the Danish energy system by the use of local regulation mechanisms. This strategy is compared with the opposite extreme, i.e. trying to solve all balancing problems via electricity trade on the international market. The conclusion is that it is feasible for the Danish society to include the CHP plants in the balancing of fluctuating wind power. There are major advantages in equipping small CHP plants as well as the large CHP plants with heat pumps. By doing so, it will be possible to increase the share of wind power from the present 20 to 40% without causing significant problems of imbalance between electricity consumption and production. Investment in increased flexibility is in itself profitable. Furthermore, the feasibility of wind power is improved.

In June 2004, representatives from more than 150 countries met at the Renewable2004 conference in Bonn, Germany, and adopted a political declaration and an international action programme. The political declaration underlines the need to remove barriers for renewable energy and internalising environmental costs in energy prices. The international action programme comprises more than 150 national and international activities to support renewable energy including the Chinese goal of expanding renewable energy to 10% by 2010 and the Philippine goal of doubling renewable energy use by 2013. The countries agreed to work within a global policy network, and to take renewable energy to the meetings in the UN Committee on Sustainable Development (CSD) that will focus on energy in 2006 and 2007. Renewable energy together with energy conservation and combined heat and power production (CHP) are essential factors for the implementation of climate change response objectives in Europe as well as in many other regions. The EU strategy is to increase the share of electricity production from Renewable energy sources (European Council, 2001) as well as from CHP (European Council, 2002). At the same time, the implementation of an internal electricity market is very important to the EU (European Council, 2003). In many EU member countries as well as in other countries around the world it is being discussed how to combine the introduction of competitive electricity markets with the implementation of ambiguous RES targets (Clark and Jensen, 2001; Duic et al., 2003; Hendriks and Blok, 1996; Hennicke, 2004; Holttinen, in press; Hvelplund, 2001; Komor and Bazilian, in press; Lund and Andersen, 2004; Lund et al., 1999; Meyer, 2003; Mitchell and Connor, 2004; Rio Gonzalez et al., in press; Skytte, 1999). Denmark is one of the leading countries in terms of implementing the combination of CHP, energy conservation and renewable energy. The primary energy supply has been kept constant for more than 30 years. Today 50 per cent of Danish electricity demand is produced in CHP and approximately 20 per cent is produced as wind power. Moreover, a further expansion is intended. In March 2004 a broad coalition in the Danish parliament decided on an ambitious plan of further expansion of both onshore and offshore wind power. Consequently, the share of wind power is going to be 25 per cent within only 5 years. All the wind power is assumed to be exported and hence sold on the international electricity markets. Meanwhile, in order to implement large-scale integration of electricity production from fluctuating renewable energy sources, the sources must be integrated with the rest of the production units in the system to make it possible for the system to secure a balance between supply and demand (Alberg Ostergaard, 2003; Duic and Graca Carvalho, 2004; Hvelplund and Lund, 1998; Lund, 2004 and Lund and Andersen, 2004; Lund and Ostergaard, 2000; Lund and Clark, 2002). The problem is even more complicated when RES is implemented together with CHP and energy conservation measures. Already now, the integration of wind and CHP causes problems to the Danish electricity supply in terms of excess production in certain hours. The problems can be seen especially in the western part of Denmark where the share of small CHP plants and wind turbines is high (Lund and Münster, 2003a). In several situations the excess electricity production together with bottlenecks in the transmission lines to the neighbour countries has greatly influenced the market prices. Based on the Danish case this paper presents some possible strategies to solve the problems and to improve the possibilities of integrating more RES electricity production into the energy supply system. The implementation of flexible regulation systems such as including the CHP units in the regulation and possible investments in heat pumps and heat storage capacity has been analysed. Such systems have been evaluated on their ability to avoid excess production in the system and on their ability to exploit trade on the international electricity market. The feasibility of investments in flexible energy systems suitable for the large-scale integration of fluctuating electricity production from renewable energy sources has been analysed on the system ability to exploit trade on the international electricity market. The analysis methodology for the Danish electricity system involves the use of the energy system analysis computer model EnergyPLAN and a detailed assumption for the development of the Nordic market for electricity, Nord Pool.

This paper has presented the results of implementing flexible regulation systems, such as CHP units included in the regulation, and possible investments in heat pumps and heat storage capacity. The systems have been evaluated on their ability to avoid excess production in the system and on their ability to exploit trade on the international electricity market. The modelling of the Nord Pool market has been based on the following: • A standard price variation based on historical data. The standard distribution has a mean value of 19 EUR/MWh and represents a wet year with plenty of water in the Nordic hydroplant systems. • A 7 year period made up of one dry year, three wet years and three normal years created out of the standard price distribution in such a way that the mean value of the future years from 2010 to 2020 equals the expectation of the Danish Energy Agency (32 EUR/MWh). • An influence on the Nord Pool price of 0.02 DKK/MWh/MW Danish export based on analysis of historical data. The above elasticity relates to a price level of 150 DKK/MWh. • Influence of trade with Germany described as fixed import/export hour distribution based on typical trade in years with high or low prices on Nord Pool, respectively. • Splitting of the market into price areas if bottlenecks arise in the transmission system. • Fossil fuel prices according to the expectations of the Danish Energy Agency. The feasibility of investments in flexibility is very high, and can be recommended for any per cent of wind power, especially wind inputs above 20–25 per cent of the demand. Furthermore, such investments make wind power more feasible. For example in the case of a production price of 29 EUR/MWh and an international CO2 trading price of 13 EUR/t the optimal wind power investment changes from 25% to more than 40% of the electricity demand. Until now, the task of balancing electricity supply and demand has been left primarily to large production units. Small CHP plants and renewable energy sources have not been involved in the regulation. Consequently, the ability of large-scale integration of renewable energy into the European system is weak. The percent of excess electricity production is relatively high, and the ability to utilise renewable energy efficiently to reduce CO2 emissions is low. If Europe is to implement the targets of increasing the share of electricity production from both CHP and renewable energy sources, such new production units must be integrated into the supply system. The investment in flexible energy systems seems to be a very cost-effective way of achieving such goals.