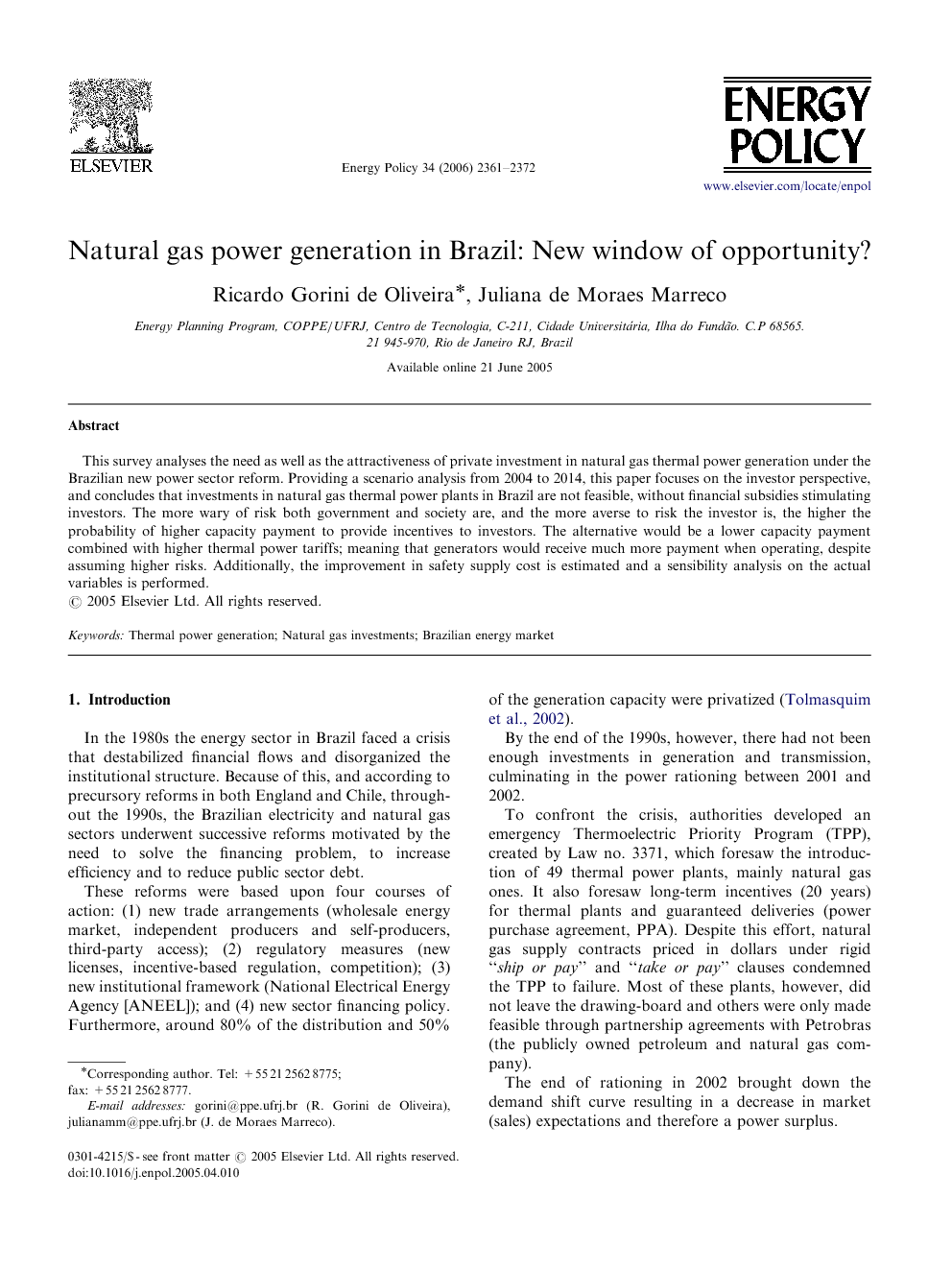 This survey analyses the need as well as the attractiveness of private investment in natural gas thermal power generation under the Brazilian new power sector reform. Providing a scenario analysis from 2004 to 2014, this paper focuses on the investor perspective, and concludes that investments in natural gas thermal power plants in Brazil are not feasible, without financial subsidies stimulating investors. The more wary of risk both government and society are, and the more averse to risk the investor is, the higher the probability of higher capacity payment to provide incentives to investors. The alternative would be a lower capacity payment combined with higher thermal power tariffs; meaning that generators would receive much more payment when operating, despite assuming higher risks. Additionally, the improvement in safety supply cost is estimated and a sensibility analysis on the actual variables is performed.

In the 1980s the energy sector in Brazil faced a crisis that destabilized financial flows and disorganized the institutional structure. Because of this, and according to precursory reforms in both England and Chile, throughout the 1990s, the Brazilian electricity and natural gas sectors underwent successive reforms motivated by the need to solve the financing problem, to increase efficiency and to reduce public sector debt. These reforms were based upon four courses of action: (1) new trade arrangements (wholesale energy market, independent producers and self-producers, third-party access); (2) regulatory measures (new licenses, incentive-based regulation, competition); (3) new institutional framework (National Electrical Energy Agency [ANEEL]); and (4) new sector financing policy. Furthermore, around 80% of the distribution and 50% of the generation capacity were privatized (Tolmasquim et al., 2002). By the end of the 1990s, however, there had not been enough investments in generation and transmission, culminating in the power rationing between 2001 and 2002. To confront the crisis, authorities developed an emergency Thermoelectric Priority Program (TPP), created by Law no. 3371, which foresaw the introduction of 49 thermal power plants, mainly natural gas ones. It also foresaw long-term incentives (20 years) for thermal plants and guaranteed deliveries (power purchase agreement, PPA). Despite this effort, natural gas supply contracts priced in dollars under rigid “ship or pay” and “take or pay” clauses condemned the TPP to failure. Most of these plants, however, did not leave the drawing-board and others were only made feasible through partnership agreements with Petrobras (the publicly owned petroleum and natural gas company). The end of rationing in 2002 brought down the demand shift curve resulting in a decrease in market (sales) expectations and therefore a power surplus. In 2003 the government of Luis Inácio Lula da Silva established a new institutional model for the electrical sector (Law no 10.848. of the 15th of March, 2004; Law 5.163. of the 30th of July, 2004). It focuses on tariff efficiency, spreading coverage access, and restarting the energy planning process. The Brazilian electrical system, from a worldwide perspective, is unique, being a large-scale hydroelectric system (approx. 80 GW and 350 TWh). The main reason is the predominance of hydroelectric generation (more than 85% of the installed capacity that under normal conditions is responsible for the production of more than 80% of the electricity consumed in the country). There are large reservoirs with the capacity of pluri-annual system optimization. Contrary to systems based exclusively on thermal power generation whose operation is unlinked to time, under the Brazilian hydrothermal system decisions made today will affect operational costs in the future. The depletion of reservoirs at any given moment is a decision made anticipating future hydro affluence, which introduces a degree of uncertainty in the decision-making process. All of these aspects require a centralized operating plan that is implemented by the National Operating System (ONS), which meets the demand by optimizing costs, as opposed to determining market prices. Despite the fact that there is a power surplus at the moment (2004–2005), restarting investment in expanding generation capacity is fundamental because power plants take between 2 and 5 years to build. There are strategic advantages to complementary thermal power generation, as well. Natural gas power generation encourages the industry chain because it demands large volumes of gas in a single location and utilizes the gas pipeline system, albeit in its incipient stage. Furthermore, when thermal power projects are introduced into hydroelectric systems, such as that of Brazil, they help increase the reliability of the electrical system. They are competitive alternatives due to shorter building time required and lower capital costs, as emphasized in Ramos et al. (2003). In Brazil the dominant company in the natural gas market is Petrobras, also the major oil producer. Thus, natural gas development is closely dependent on Petrobras's strategy. Although a secondary natural gas market building was highly desirable, transportation and distribution costs associated with an incipient infrastructure is still the key point. This situation can be seen particularly in the northeast where power plants could not operate when they were required due to natural gas shortage supply. There are other barriers contributing to block the expansion of natural gas thermal power generation in Brazil as for example the “take or pay” clauses and the dollarization of natural gas contracts. Around 1/3 of the total amount of natural gas consumed in Brazil today is imported from Bolivia, forming a very significant part of the whole of Bolivian exports, complicating even more renegotiation possibilities on those contracts. The absence of institutional regulatory guidelines for natural gas represents another obstacle to be overcome. (For more details on barriers see Fernandes et al., 2005). Natural gas transportation regulation is a matter of responsibility of ANP (the oil and gas federal regulatory body) while distribution matters are the responsibility of regional institutions. There is no agreement among these agencies expertise nor is there homogeneity among the different regions increasing regulatory uncertainties. Studies analyzing these matters are currently being undertaken by the current government. Other challenges are presented in Ban, 1996. Despite these barriers, analyzing new perspectives in the context of the new institutional model of the Brazilian energy sector is essential and must be contemplated for the evaluation of the possible niches of the thermal power market. Therefore, the main goal of this survey is to analyze which are the special conditions that will motivate both the need and attractiveness of natural gas thermal power generation in Brazil from 2004 to 2014.