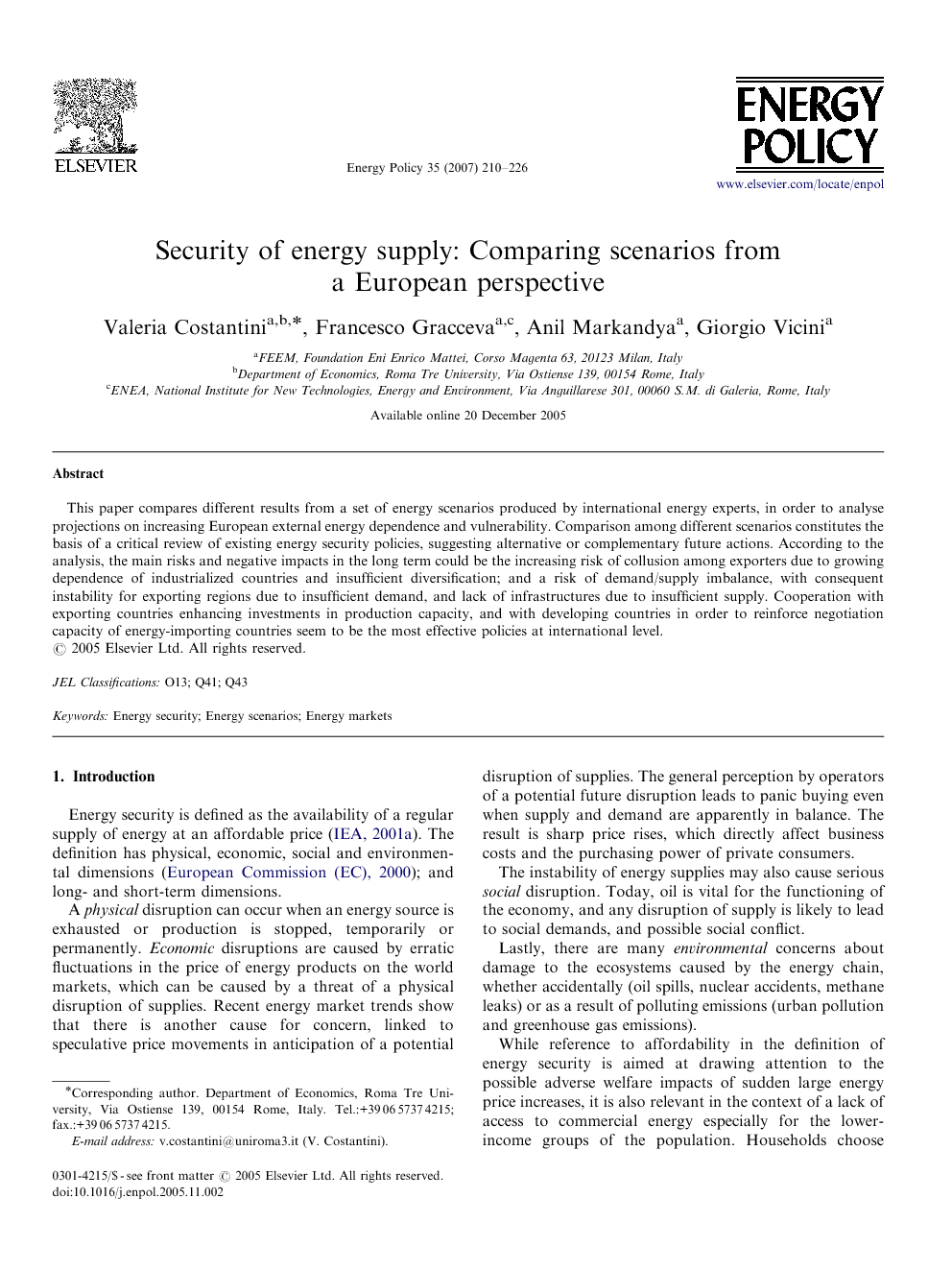 This paper compares different results from a set of energy scenarios produced by international energy experts, in order to analyse projections on increasing European external energy dependence and vulnerability. Comparison among different scenarios constitutes the basis of a critical review of existing energy security policies, suggesting alternative or complementary future actions. According to the analysis, the main risks and negative impacts in the long term could be the increasing risk of collusion among exporters due to growing dependence of industrialized countries and insufficient diversification; and a risk of demand/supply imbalance, with consequent instability for exporting regions due to insufficient demand, and lack of infrastructures due to insufficient supply. Cooperation with exporting countries enhancing investments in production capacity, and with developing countries in order to reinforce negotiation capacity of energy-importing countries seem to be the most effective policies at international level.

Energy security is defined as the availability of a regular supply of energy at an affordable price (IEA, 2001a). The definition has physical, economic, social and environmental dimensions (European Commission (EC), 2000); and long- and short-term dimensions. A physical disruption can occur when an energy source is exhausted or production is stopped, temporarily or permanently. Economic disruptions are caused by erratic fluctuations in the price of energy products on the world markets, which can be caused by a threat of a physical disruption of supplies. Recent energy market trends show that there is another cause for concern, linked to speculative price movements in anticipation of a potential disruption of supplies. The general perception by operators of a potential future disruption leads to panic buying even when supply and demand are apparently in balance. The result is sharp price rises, which directly affect business costs and the purchasing power of private consumers. The instability of energy supplies may also cause serious social disruption. Today, oil is vital for the functioning of the economy, and any disruption of supply is likely to lead to social demands, and possible social conflict. Lastly, there are many environmental concerns about damage to the ecosystems caused by the energy chain, whether accidentally (oil spills, nuclear accidents, methane leaks) or as a result of polluting emissions (urban pollution and greenhouse gas emissions). While reference to affordability in the definition of energy security is aimed at drawing attention to the possible adverse welfare impacts of sudden large energy price increases, it is also relevant in the context of a lack of access to commercial energy especially for the lower-income groups of the population. Households choose among energy options on the basis of fuel accessibility and affordability, the household's socio-economic characteristics and attitudes, and the attributes of the different fuels. Lack of access implies unsatisfied energy requirements or the use of traditional fuels, both of which result in reduced energy security. If commercial energy services and electricity are available, income is the main factor that appears to influence a household's choice of fuel (IAEA, 2005).1 Finally, the definition of energy security can be seen from a short-term perspective or a long-term perspective. In the short term, the concern is with the disruptive impacts of an unanticipated cut in supply or rise in price. In the long term, the concern is more with the availability of sufficient energy that allows stable and sustainable economic development. Energy security has risen in importance on the international policy agenda during recent decades due to growing dependence of industrialized economies on imported energy consumption and the increased frequency of disruptions in supply. In this context, the current European domestic energy system is not sufficiently reliable or affordable to support sustained economic growth. OECD European countries are consuming more and more energy and importing more and more energy products. As a result, external energy dependence for all sectors of the economy is constantly increasing, especially for oil and natural gas. For the future, it is vitally important to be able to implement measures that will allow an orderly and effective response to the threat from energy insecurity. The adoption of an effective emergency oil stock system as provided by the IEA or the development of futures markets for energy products which allow consumers and producers to hedge against the possibility of disruptions, are all examples of political and market responses to energy insecurity. For this purpose, we need reliable forecasts of future energy demand as well as quantitative assessments of future supply, together with a geopolitical analysis of distribution of resources. A number of researchers have tried to develop a set of security indicators (IEA, 2001a; Kendell, 1998; von Hirschhausen and Neumann, 2003). The measures of supply security can be grouped into two categories: dependence, and vulnerability, represented both in physical and economic terms. Physical measures describe the relative level of imports or the prospects for shortages and disruptions. Economic measures describe the cost of imports or the prospects for price shocks. The type of dependence will vary according to energy type and according to the structure of the international market. Oil shows high dependence on market price volatility and on geopolitical instability of exporters. Gas, on the other hand, could be an insecure source of energy scarce supply if the importer depends significantly on a single gas pipeline. The physical and economic dimension of dependence and vulnerability are strictly connected, because physical shortages or disruptions quickly manifest themselves as price increases. Nonetheless, economic dependence measures are probably less relevant to long-run thinking about energy security than are economic vulnerability measures, which are more representative of real effects of energy disruptions on the national system. In this paper, dependence and vulnerability of the European energy system has been analyzed through a comparison of the results of energy scenarios produced by the International Energy Agency (IEA), the International Institute for Applied Systems Analysis with World Energy Council (IIASA-WEC), the Intergovernmental Panel on Climate Change (IPCC), the US Energy Department (EIA-DOE) and the European Union with its last available energy outlook (World Energy Technology and climate policy Outlook, WETO). The forecasts from these scenarios vary widely, as we will see below. Pessimistic projections of increasing uncertainties on energy markets are not confirmed by all available scenarios, and there are substantial differences both on the supply and demand side. Considering those divergences, the aim of the analysis will be to examine the geopolitical factors emerging from those results. In the following sections a general overview on geopolitics of oil and natural gas will be provided together with a contextual report of divergent energy security measures coming from scenarios. A final assessment on key issues, risks and policies for the long term will be addressed both for oil and gas.

This paper has reviewed the oil and gas supply and demand scenarios to 2030, including a regional breakdown in both supply and demand and its implications for regional trades. On the positive side we can say that there is agreement on global supply demand balance for most of this century. Total reserves of oil are found to be sufficient to around 2050, although even by that date some unconventional reserves will have to be developed. If we include resources as well as reserves, supply is sufficient in all 13 long-term scenarios up to 2100. For gas the situation is even better: reserves are sufficient at least to 2045 and reserves and resources are sufficient to 2100. Looking at the regional evolution and focusing over the next 20–30 years, there is less agreement among the scenarios. On the supply side, there is great uncertainty about oil supply from Middle East and Africa, while gas supply has less variability, as output is expected to grow by more than 50%, with all regions contributing to this, but especially the FSU and the Middle East and Africa. On the demand side, oil demand forecasts are divergent for North America and Developing Asia, in both cases reflecting different policy assumptions, including the implementation of the Kyoto Protocol. Demand for gas shows smaller variations, and a general expansion in all regions, but here too there is uncertainty about North America. The main feature about gas demand is its implications for gas trade, which is estimated to increase two- to four-fold between 2000 and 2020. This will imply huge investments in long distance pipelines, and it is not clear if the geopolitical situation will make that feasible in this time frame. The implications of all these developments for Europe can be seen in terms of changes in measures of the region's dependence and vulnerability to the supply and demand for these fuels. Looking at oil, there is a wide variation in the forecast of the dependence indicators. In terms of vulnerability, all scenarios show a decline, as the degree of supply concentration falls. An interesting result is that the scenarios also support the view that it is possible for the demand for oil in Europe to moderate, or even fall, without the oil exporters suffering a fall in their real incomes. For gas, dependence is expected to increase in all scenarios, but vulnerability is expected to decline, with imports from the Middle East playing a major role in this (Table 5). The policy implications of these findings for Europe can be summarized as follows: • Demand side measures such as energy efficiency, especially in transportation sector, together with technological investments on the supply side, could reduce import dependence on oil, as underlined within IIASA-WEC results. (e.g. the EU SAVE Directive (1993) needs to be promoted more vigorously). • Stability and development in the Middle/East and FSU, and cooperation in the development of energy resources in these regions will be key factors in ensuring that sufficient investment is made in infrastructure and in ensuring the security of transit routes (FSU) and cooperation for political stability in Middle/East. Measures such the Energy Charter Treaty, with the FSU, the Euro-Mediterranean Energy Partnership and INOGATE, with the countries of South East Europe are all deigned to promote such cooperation. • Involving Developing Asia (in any case a key actor on energy market in the medium-term) in order to cooperate building infrastructures, reducing risk of conflicts will also contribute to European energy security. • Considering natural gas, a reduction of dependence through increase of domestic production or through energy saving is not credible. Nor is the diversification of energy sources through fuel substitution a major possibility, given the growing use of gas in power generation. • The situation is different with regard to diversification of the sources of gas, because Europe's position in the world market could be more favourable if Africa/Middle East's exports grow substantially, with significant volumes of LNG. This would make Europe more able to diversify its own sources, as it would increase the flexibility of the market. • Finally, a critical factor is the transport capacity towards Europe, as it seems very likely that expected demand is higher than projected infrastructure. This will require access to the gas reserves, the opening of producing areas to international investments and measures to increase the stability of “transit countries”.