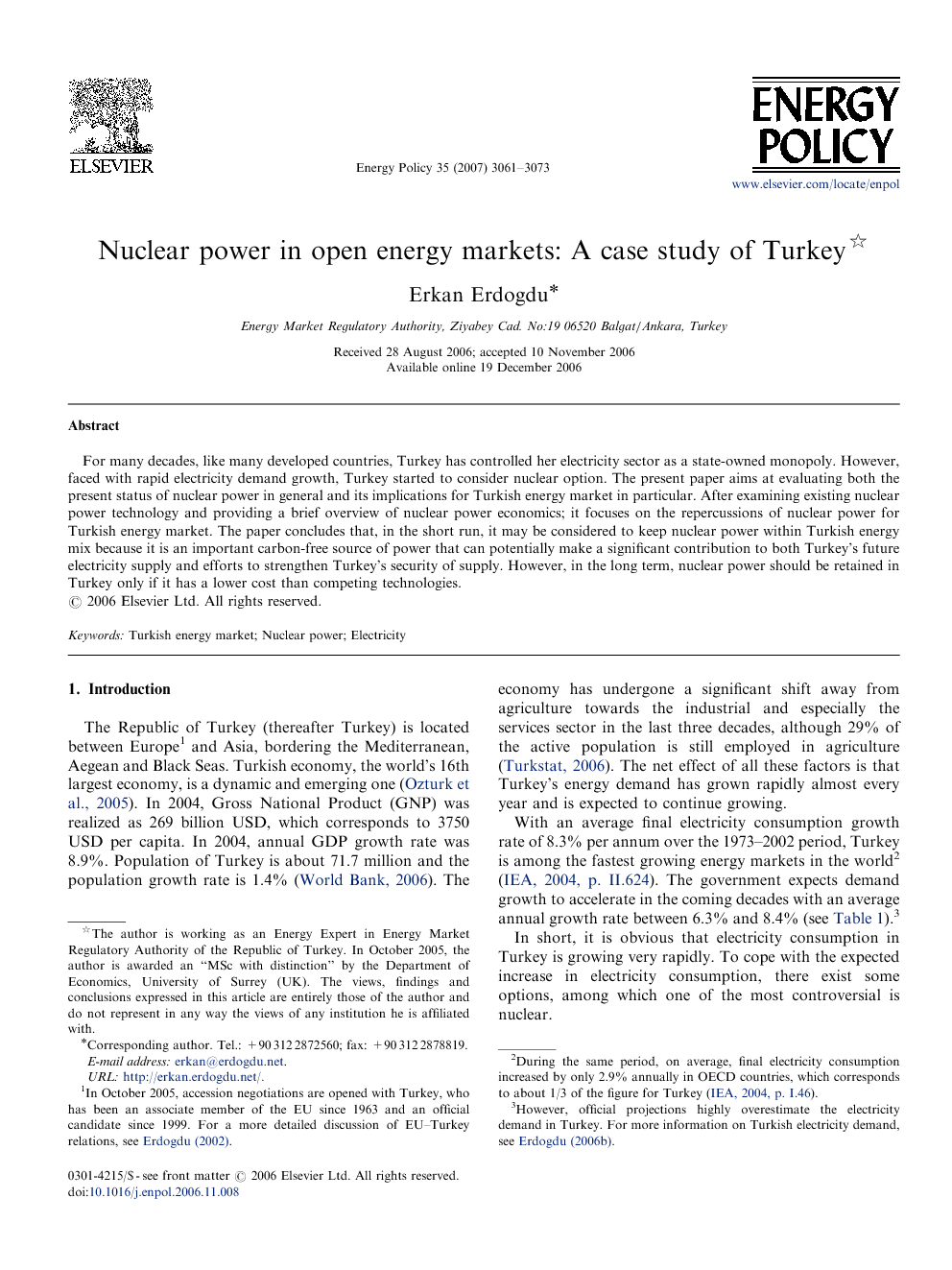 The Republic of Turkey (thereafter Turkey) is located between Europe1 and Asia, bordering the Mediterranean, Aegean and Black Seas. Turkish economy, the world's 16th largest economy, is a dynamic and emerging one (Ozturk et al., 2005). In 2004, Gross National Product (GNP) was realized as 269 billion USD, which corresponds to 3750 USD per capita. In 2004, annual GDP growth rate was 8.9%. Population of Turkey is about 71.7 million and the population growth rate is 1.4% (World Bank, 2006). The economy has undergone a significant shift away from agriculture towards the industrial and especially the services sector in the last three decades, although 29% of the active population is still employed in agriculture (Turkstat, 2006). The net effect of all these factors is that Turkey's energy demand has grown rapidly almost every year and is expected to continue growing. With an average final electricity consumption growth rate of 8.3% per annum over the 1973–2002 period, Turkey is among the fastest growing energy markets in the world2 (IEA, 2004, p. II.624). The government expects demand growth to accelerate in the coming decades with an average annual growth rate between 6.3% and 8.4% (see Table 1).3 In short, it is obvious that electricity consumption in Turkey is growing very rapidly. To cope with the expected increase in electricity consumption, there exist some options, among which one of the most controversial is nuclear. Stimulated by the urgency of the Second World War, nuclear science progressed rapidly from the discovery of the neutron by Sir James Chadwick in 1932. The first controlled chain reaction took place in 1943, the first atomic weapon was developed in 1945, and in 1951 electricity is produced using nuclear energy for the first time. Following its first application for generating electricity in the USA, nuclear energy began to be applied to the production of electricity in the UK (1953), Russia (1954), France (1956), and Germany (1961); that is, five countries within the first decade. Ten more countries began nuclear-based generation in the 1960s followed by another ten in the 1970s. The oil crisis of the early 1970s provoked a surge in nuclear power plant (NPP) orders and construction. Later that decade, the world economic slowdown combined with the declining price of fossil fuels curtailed the growth of nuclear energy demand. As this took effect, two accidents, at Three Mile Island in the USA (1979) and at Chernobyl in the former Soviet Union (1986), raised serious questions in the public mind about nuclear safety. The overall effect was a significant slowing of nuclear energy's growth in the 1990s. Nevertheless, some countries continued to push ahead strongly with reactor construction, thus contributing to small increases in nuclear electricity production (OECD, 2003). Today, there are 441 nuclear reactors in operation worldwide, with an additional 35 under construction. Nuclear power provides about 17% of the world's electricity (Duffy, 2004). To put it shortly, the 50-year history of commercial nuclear power has been punctuated by dramatic policy changes. The first 20 years, marked by limited public participation, tight government control, and promises of clean, abundant energy, were followed by a period of intense social and political conflict over the technology's environmental and safety implications. Nuclear policy in the USA and most European nations shifted from all-out support to a more ambivalent posture, which led to a dramatic slowdown in the construction of new plants. For many decades, like many developed countries, Turkey has controlled her electricity sector as a state-owned monopoly. However, faced with rapid electricity demand growth, Turkey started to consider nuclear option.4 The present paper aims at evaluating both the present status of nuclear power in general (including existing nuclear technology, nuclear power economics and current status of nuclear power in the world) and its implications for Turkish energy market in particular. Section 2 provides a brief overview of nuclear power economics. Section 3 not only sets out the development and current context of nuclear power in the world but also focuses on its repercussions for the open energy markets. Section 4 considers both the historical background and current status of nuclear power in Turkey. Energy policymakers and others whose main interest is in nuclear-related policy matters may wish to concentrate on the final part.