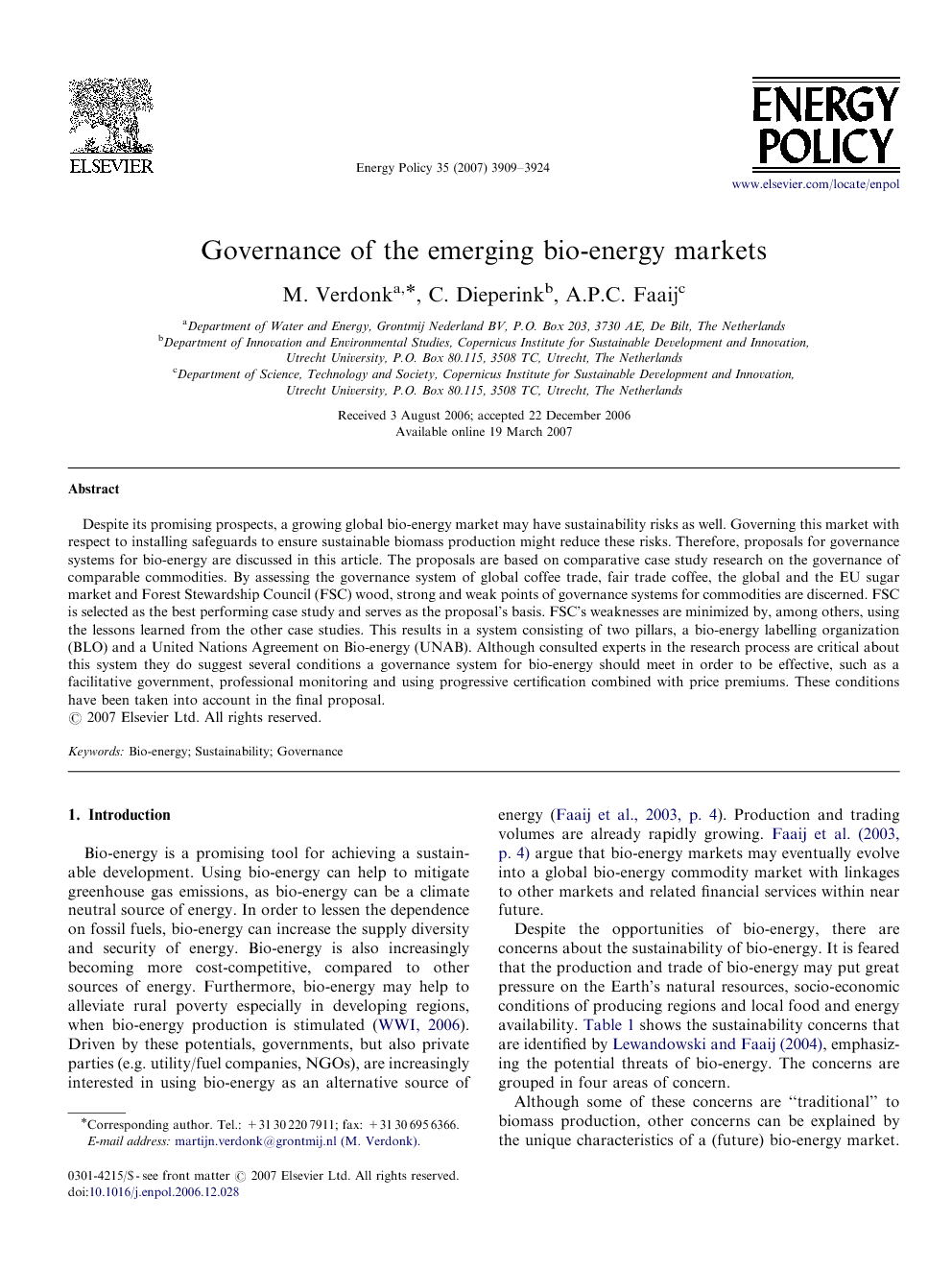 Despite its promising prospects, a growing global bio-energy market may have sustainability risks as well. Governing this market with respect to installing safeguards to ensure sustainable biomass production might reduce these risks. Therefore, proposals for governance systems for bio-energy are discussed in this article. The proposals are based on comparative case study research on the governance of comparable commodities. By assessing the governance system of global coffee trade, fair trade coffee, the global and the EU sugar market and Forest Stewardship Council (FSC) wood, strong and weak points of governance systems for commodities are discerned. FSC is selected as the best performing case study and serves as the proposal's basis. FSC's weaknesses are minimized by, among others, using the lessons learned from the other case studies. This results in a system consisting of two pillars, a bio-energy labelling organization (BLO) and a United Nations Agreement on Bio-energy (UNAB). Although consulted experts in the research process are critical about this system they do suggest several conditions a governance system for bio-energy should meet in order to be effective, such as a facilitative government, professional monitoring and using progressive certification combined with price premiums. These conditions have been taken into account in the final proposal.

A perfect governance model does not seem to exist. The neo-liberal governance systems have difficulties in addressing the sustainability concerns, because sustainability policies are minimalist or even absent. The welfare state and CSR governance systems seem better able to address the sustainability concerns, because sustainability policies are generally well developed. The welfare state governance system shows that sustainability can be integrated in an entire market. However, a precondition to welfare state governance in an international context is that a supranational institution must exist, which is able to implement its policies. This may be unrealistic when regulation of international or global bio-energy trade and production is sought. The CSR governance systems perform relatively well, because they are more attractive, flexible and inexpensive, compared to the welfare state case study. Moreover, it lacks the need of a supranational institution. The FSC governance system is considered to be the most promising governance system in meeting the objective, because this governance system is able to address most sustainability concerns. However, major weaknesses are associated with the CSR governance systems. The most significant weakness is the dependency on conscious consumers, because the number of conscious consumers is generally limited. This is complicated by voluntary participation of market actors in the Fair Trade coffee and FSC wood markets. Additionally, FSC is less attractive to (especially) Southern and small producers, because of high barriers of entry. These weaknesses result in limited supply and demand. Our case studies reveal that a combination of the CSR and welfare state model is promising. The first pillar of the combined proposal is formed by the CSR-based BLO, which offers a FSC-based certification system that is able to penetrate the market within a short time, offering stakeholder participation and standards that secure most sustainability concerns. By being compatible with neo-liberalism, the BLO seems acceptable to the industry and the WTO. The attractiveness for small and Southern producers is enhanced in this system using Fair Trade-based instruments, but remains in balance with downstream interests at the same time. The framework of universal sustainability principles enables geographical differentiation of standards and accommodation of numerous bio-energy feedstocks. Because the BLO suffers from dependency on conscious consumers, which is common to the CSR case studies, governmental intervention is proposed in order to realize a significant market penetration (the 2nd pillar). This intervention aims at enhancing the use of the BLO's certified bio-energy, by stimulating the industry using covenants, but also by using more coercive instruments like setting the BLO standards as production and import standard or internalizing environmental costs and benefits in energy prices. An International Agreement on Bio-energy (IAB) is proposed in order to coordinate the development and implementation of these instruments. A combined private (BLO) and public (IAB) initiative, can realize a fast and significant implementation of a bio-energy governance system in the market. This proposal seems applicable to the bio-energy market, but to some issues attention should be paid. Initially, limiting the number of bio-energy feedstocks and/or the number of sustainability concerns helps to manage the BLO in its starting phase. Secondly, new plantations could be allowed when established on abandoned agricultural land. This helps to accommodate the future dominance of plantations. And thirdly, the usage of GHG mitigation indicators that assess the GHG balance of bio-energy are perhaps less expensive and time-consuming compared to LCA studies. As a UNAB seems politically infeasible, we propose the development of an IAB in which front running (Western) countries participate. Western countries are assumed to have less divergent views on sustainability and foreign politics and have already markets for sustainable production. The proposal meets most of the effectiveness conditions mentioned by the interviewed experts, such as the use of gradual certification and a supportive government. The perceived effectiveness is further enhanced by incorporating several additional adjustments in the proposal. A market supervisor should be institutionalized as this helps to guard the transparency and competition in the certification market. By focussing on involvement of leading actors, the entire industry can be “persuaded” to participate in the BLO. And micro-credits issued by local development banks can be used to further lower the barrier of entry for small producers. Some issues that may have impact on the conclusions must be noted. Firstly, the conclusions drawn about the feasibility and effectiveness of the design may not be supported by certain stakeholders and policymakers, because their opinions are not represented by the interviewed experts. Secondly, the sustainability concerns are drawn from literature and are not defined by using a stakeholder involvement process. The defined concerns may, therefore, not meet the needs of stakeholders in different ecological and socio-economic conditions. Thirdly, evaluation criteria are of course debatable. This evaluation must be regarded as a first attempt to evaluate the performance of governance systems. And finally, the description of the case studies relied for a great deal on the work of other researchers, which may have resulted in conclusions shaped implicitly by their perceptions. Much of the assessments, however, are based on primary research, so this impact may be limited.