عنوان انگلیسی
A model of vertical integration and investment in generation capacity in electricity markets: The case of the bidding game
دانلود فوری مقاله + سفارش ترجمه 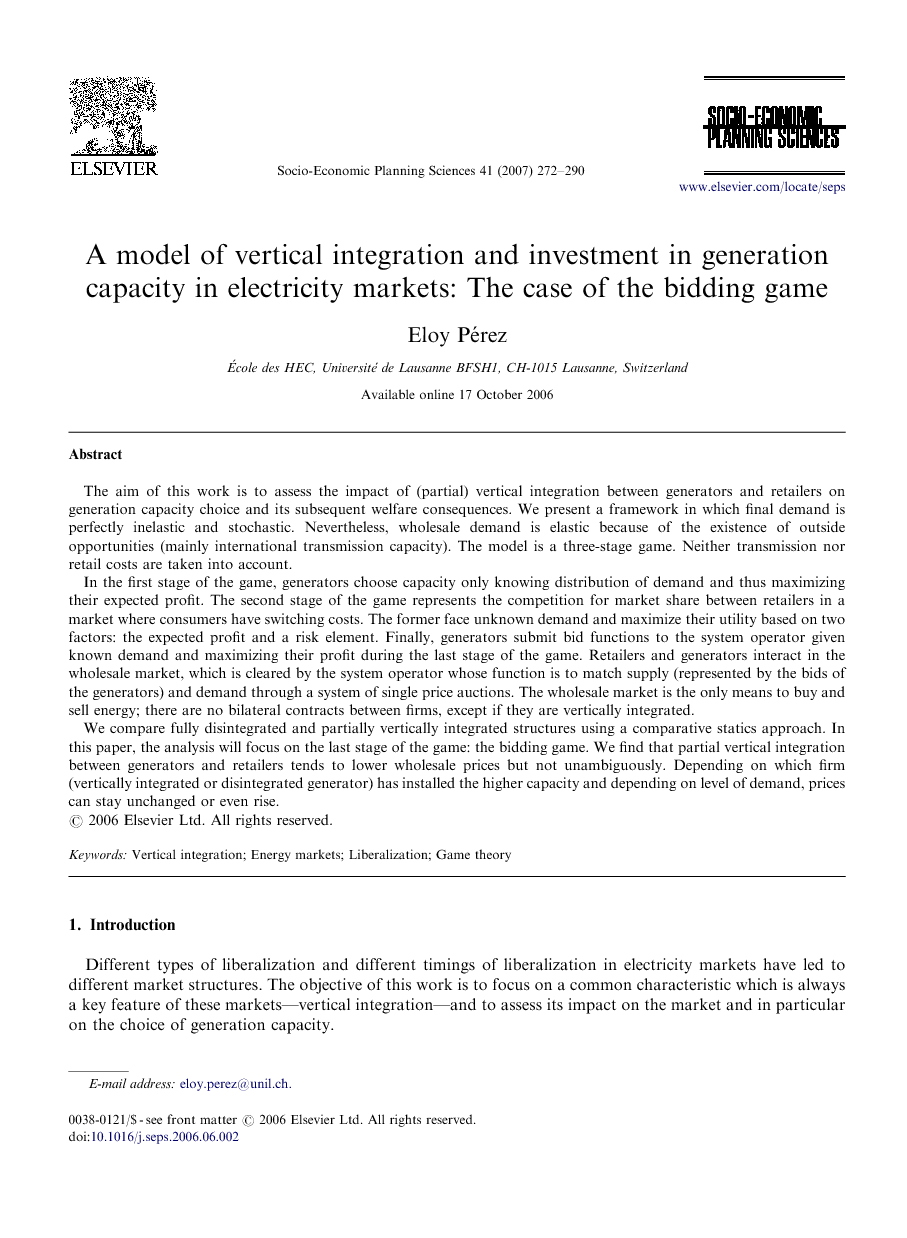 The aim of this work is to assess the impact of (partial) vertical integration between generators and retailers on generation capacity choice and its subsequent welfare consequences. We present a framework in which final demand is perfectly inelastic and stochastic. Nevertheless, wholesale demand is elastic because of the existence of outside opportunities (mainly international transmission capacity). The model is a three-stage game. Neither transmission nor retail costs are taken into account. In the first stage of the game, generators choose capacity only knowing distribution of demand and thus maximizing their expected profit. The second stage of the game represents the competition for market share between retailers in a market where consumers have switching costs. The former face unknown demand and maximize their utility based on two factors: the expected profit and a risk element. Finally, generators submit bid functions to the system operator given known demand and maximizing their profit during the last stage of the game. Retailers and generators interact in the wholesale market, which is cleared by the system operator whose function is to match supply (represented by the bids of the generators) and demand through a system of single price auctions. The wholesale market is the only means to buy and sell energy; there are no bilateral contracts between firms, except if they are vertically integrated. We compare fully disintegrated and partially vertically integrated structures using a comparative statics approach. In this paper, the analysis will focus on the last stage of the game: the bidding game. We find that partial vertical integration between generators and retailers tends to lower wholesale prices but not unambiguously. Depending on which firm (vertically integrated or disintegrated generator) has installed the higher capacity and depending on level of demand, prices can stay unchanged or even rise.

Different types of liberalization and different timings of liberalization in electricity markets have led to different market structures. The objective of this work is to focus on a common characteristic which is always a key feature of these markets—vertical integration—and to assess its impact on the market and in particular on the choice of generation capacity. Strategic interactions drive structure, but the reverse is also true. In electricity markets, the crucial factor affected by structure is the choice of generation capacity. Compared to other markets, capacity choice is particularly important in electricity markets. Limited transmission capacity between markets contributes to increased dependence on one's own generation. Another key factor is the relatively slow process of building new capacity. These factors contribute in turn to give a certain form of market power to generators. In a state monopolistic structure, capacity decisions are driven by expected demand and taken by a central regulator. This leads most of the time to security driven over-investment in capacity. In a fully decentralized and competitive structure, however, capacity decisions are driven by prices and taken by generators. This leads to under-investment due to the possibility for generators to exercise market power. If a liberalized market is partially vertically integrated, what are then the capacity decisions of the agents, and what are the consequences of these decisions? Can a certain amount of vertical integration avoid under-investment as well as over-investment, while at the same time ensuring an acceptable amount of competition leading to competitive prices? If yes, what tools does the regulator have at his disposal to induce such a situation? Whatever their level of maturity, all electricity markets are partially vertically integrated. In particular, all European electricity markets fall in this category, even the British market, which is one of the most mature markets. A variety of technical and historical causes may contribute to the resurgence of vertical integration in today's liberalized electricity markets. We present an argument based on insurance behavior of risk averse agents, which is sufficient to explain this resurgence. Liberalization and the process of unbundling that accompanies it tend to make generators under-invest in generation capacity. Under-investment is a market power device for generators; when the capacity limit is reached the incentive to bid at higher prices is very strong and can represent a strategic equilibrium given that final demand is very inelastic (or completely inelastic if we assume price caps at the retail level). The Californian experience is relevant in this sense; the lack of investment had undermined the generation capacity, which was consequently far too small to satisfy increasing demand. The generator's resulting power to overbid combined with price-capped retailers largely contributed to the well-known disaster. This behavior, resulting in generation capacity under-investment, hurts the retail and distribution sectors; if the sector is price-capped, the Californian example is sufficiently explicit. But even without price cap, distributors can be in a weak situation for two reasons at least; on the one hand, under-investment in capacity can clearly undermine safety of power supply and, on the other hand, it contributes to an increase in prices as well as an increase in price variability. The latter is particularly undesirable if we assume risk averse distributors. The assumption of risk aversion is based on the fact that the retail market cannot be cleared as frequently as the wholesale market; if a distributor commits to a price, he has to hold this price during a period where the wholesale price is free to vary. In this context the incentive of a distributor to control a generator can be seen as a classical insurance behavior. The only unanswered question is then to determine an incentive for the generator to accept the vertical structure. In this case, a parallel insurance argument can be underlined: risk aversion is based on the fact that generator ensures through a vertical structure a certain amount of captive final demand. We have built a model designed to embody these two crucial aspects of liberalized electricity markets; the insurance behavior of distributors leading to vertical integration, and the bidding power of generators (leading to under-investment in generation capacity), the first being a means for distributors to protect against the second. The limit of this integration process is represented by the loss (in terms of market power) incurred by generators in an integrated structure, which is, thus, only viable if the distributor can compensate the generator. Consequently the whole process leads to a situation of partial vertical integration in which choice of generation capacity as well as potential collateral effects of competition between integrated and disintegrated structures can be analyzed. The analysis is based on a comparative statics approach of two situations: decentralized and partially vertically integrated structures. We focus on mature market characteristics: existence of a wholesale market, no price cap and free choice of provider for end consumers. The structure of the paper is the following: first, we present a literature review in Section 2. In Section 3, the model will be documented. Finally, Section 4 will focus on the analysis of the bidding game results.

After having presented a three stage model built to deal with vertical integration and its subsequent effects on generation capacity choice, we have focused our analysis on one stage of this game: the bidding game. From a rather simple structure allowing for an analytical solution, the bidding game yields qualitatively realistic results; price levels, nature of the relationship between level of prices and demand, etc. Using this game in a static comparative approach between fully disintegrated and partially vertically integrated structures, tends to confirm that partial vertical integration lowers wholesale prices. Nevertheless, this result has to be moderated; in some situations and for some levels of demand, wholesale prices can stay unchanged (in particular in a situation of full capacity utilization) or even, more rarely, can rise due to the reaction of the (non-integrated) generator to the overall lower level of prices, if this agent has a leading strategic position due to the fact that its capacity is larger. In fact, as the vertically integrated agent is the one who has an incentive to lower prices, this agent needs to be the price setting agent (not to be capacity constrained) to transmit the impact of its incentives to the market; in a situation of high demand, if the vertically integrated firm is the lowest capacity firm, he is no longer price setting and thus this leads to higher prices. The next step of this work, based on the bidding game, will be to implement the full three-stages model to obtain generation capacity choices as well as retail prices. In the light of the results presented in this paper, we can already anticipate that the compensation effect between generators and retailers—underlined in the introduction—should result, ceteris paribus, in integration being more attractive to high capacity generators. As we have seen, the larger capacity agent (i.e., the leading agent) looses less by integration in terms of benefits from market power than the smaller capacity generator and the retailer is better insured (faces less volatility) by integrating the larger capacity generator. This implies a larger scope for compensation schemes likely to lead to vertical integration. Simulation will be used, as no closed form solutions exist. A static comparative approach will allow us to analyze social welfare issues.