عنوان انگلیسی
The impact of individualism on buyer–supplier relationship norms, trust and market performance: An analysis of data from Brazil and the U.S.A.
دانلود فوری مقاله + سفارش ترجمه 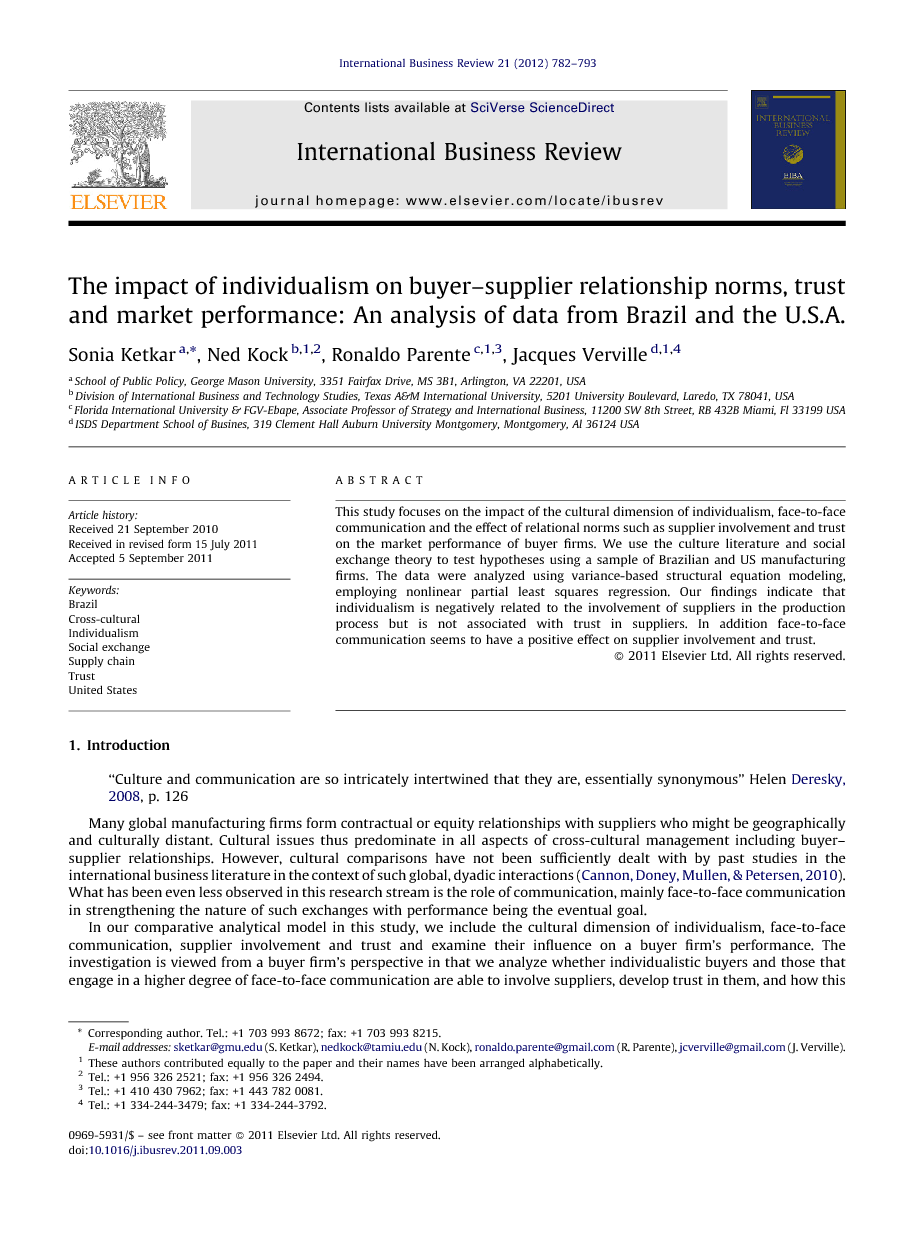 This study focuses on the impact of the cultural dimension of individualism, face-to-face communication and the effect of relational norms such as supplier involvement and trust on the market performance of buyer firms. We use the culture literature and social exchange theory to test hypotheses using a sample of Brazilian and US manufacturing firms. The data were analyzed using variance-based structural equation modeling, employing nonlinear partial least squares regression. Our findings indicate that individualism is negatively related to the involvement of suppliers in the production process but is not associated with trust in suppliers. In addition face-to-face communication seems to have a positive effect on supplier involvement and trust.

Many global manufacturing firms form contractual or equity relationships with suppliers who might be geographically and culturally distant. Cultural issues thus predominate in all aspects of cross-cultural management including buyer–supplier relationships. However, cultural comparisons have not been sufficiently dealt with by past studies in the international business literature in the context of such global, dyadic interactions (Cannon, Doney, Mullen, & Petersen, 2010). What has been even less observed in this research stream is the role of communication, mainly face-to-face communication in strengthening the nature of such exchanges with performance being the eventual goal. In our comparative analytical model in this study, we include the cultural dimension of individualism, face-to-face communication, supplier involvement and trust and examine their influence on a buyer firm's performance. The investigation is viewed from a buyer firm's perspective in that we analyze whether individualistic buyers and those that engage in a higher degree of face-to-face communication are able to involve suppliers, develop trust in them, and how this integration of suppliers in the production process might affect the market performance of the buyer firm. Since the relational norms of involvement and trust are determined endogenously, we include all our variables in a single structural equation model and compare the cultural orientations of buyer firms from Brazil and the United States. Our study makes the following contribution. First, we add to the body of literature by linking these social constructs to economic incidents (Luo, 2007 and Uzzi, 1997). The novelty of our paper however lies in its focus on face-to-face communication which has been incorporated into our theoretical model. This variable has been largely ignored as an enhancer of relationships. Face to face communication might add somewhat to the firm's financial expenses but might reduce the costs of knowledge or resource transfer or trust building or eliciting contribution from suppliers that ultimately positively settles on the bottom line. Neither has this construct of communication been adequately examined in this buyer–supplier context nor has its contribution to the trust-building process been verified (Dyer & Chu, 2000). Our goal is also to note this role in dyadic associations. Third, there are several studies cited at various junctures in this paper that focus on the antecedents of trust and its effect on performance. However, few studies which included international dyadic relationships did not explicitly explore how cultural elements might play a role in trust (Dyer and Chu, 2000 and Luo et al., 2009). For example, although Krishnan, Martin, and Noorderhaven (2006) examined the trust-performance relationship in international alliances, they included cultural distance only as a control variable in their model but did not investigate how the cultural orientation of the partners would influence trust or performance. We fill this gap through a cross-culture comparison of buyer firms from Brazil and the United States. Fourth, we weigh in on relative market performance as the dependent variable as compared with relationship performance which has been a common dependent construct in prior research. Furthermore, we explicitly and directly assess the relationship aspect of buyer–supplier links and thus our findings contain managerial implications as pointed out in the discussion section. Clearly, for global managers, understanding how successful management of the relationship with suppliers will impact their market performance as compared to that of rival firms is much more meaningful from a profitability perspective than simply knowing that their relationship with suppliers is superior without having quantifiable measures as in previous studies which are reviewed in the following sections. Finally, on the methodological front, we use a structural equation method that captures the entire relationship along with mediators in a single model of individualism–supplier relations-performance. The paper is organized as follows. The next section describes our conceptual model and literature. We then develop hypotheses relating individualism to supplier relationship characteristics. This section is followed by research methods, results and then the conclusion.