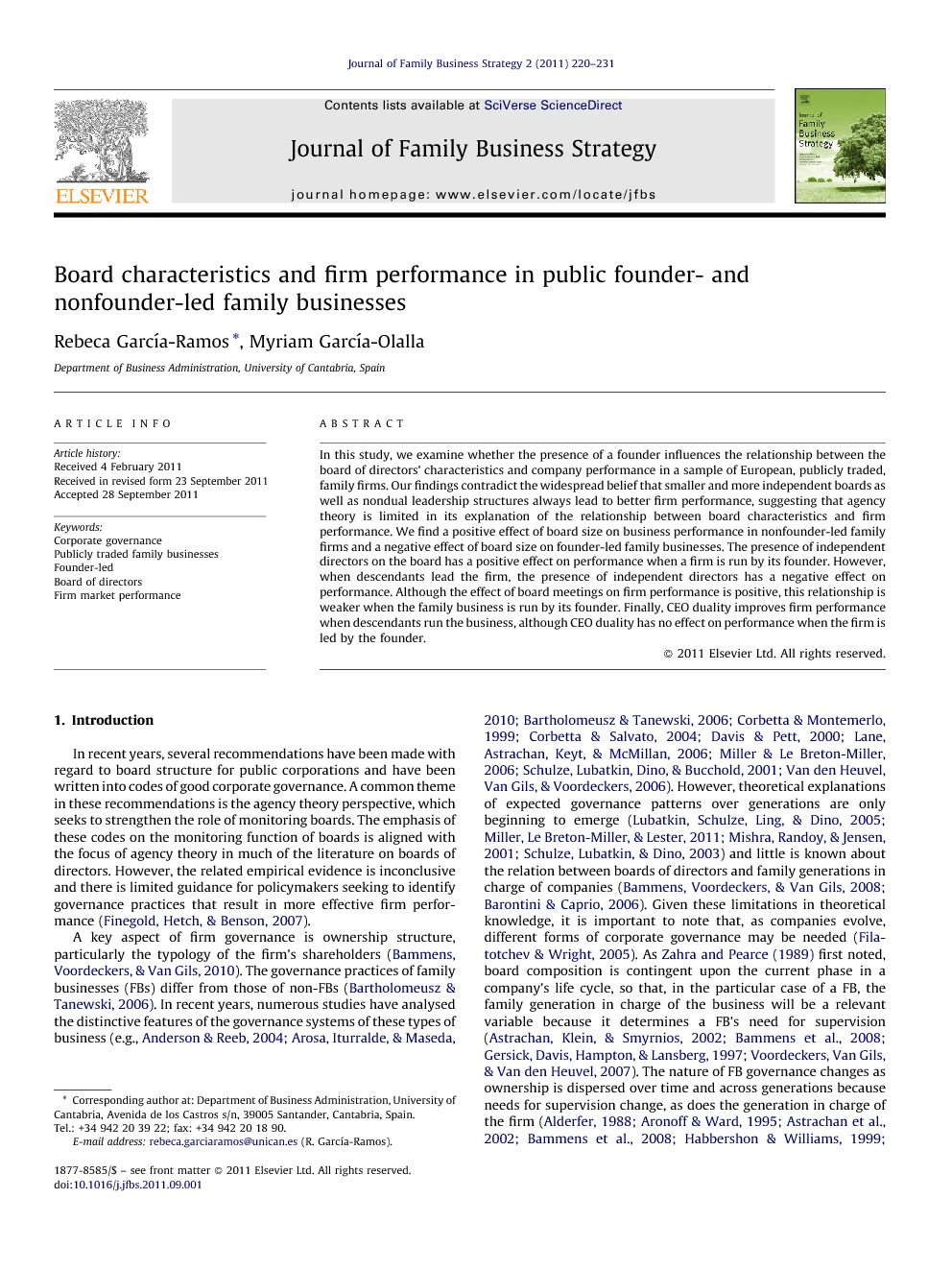 In recent years, several recommendations have been made with regard to board structure for public corporations and have been written into codes of good corporate governance. A common theme in these recommendations is the agency theory perspective, which seeks to strengthen the role of monitoring boards. The emphasis of these codes on the monitoring function of boards is aligned with the focus of agency theory in much of the literature on boards of directors. However, the related empirical evidence is inconclusive and there is limited guidance for policymakers seeking to identify governance practices that result in more effective firm performance (Finegold, Hetch, & Benson, 2007). A key aspect of firm governance is ownership structure, particularly the typology of the firm's shareholders (Bammens, Voordeckers, & Van Gils, 2010). The governance practices of family businesses (FBs) differ from those of non-FBs (Bartholomeusz & Tanewski, 2006). In recent years, numerous studies have analysed the distinctive features of the governance systems of these types of business (e.g., Anderson and Reeb, 2004, Arosa et al., 2010, Bartholomeusz and Tanewski, 2006, Corbetta and Montemerlo, 1999, Corbetta and Salvato, 2004, Davis and Pett, 2000, Lane et al., 2006, Miller and Le Breton-Miller, 2006, Schulze et al., 2001 and Van den Heuvel et al., 2006). However, theoretical explanations of expected governance patterns over generations are only beginning to emerge (Lubatkin et al., 2005, Miller et al., 2011, Mishra et al., 2001 and Schulze et al., 2003) and little is known about the relation between boards of directors and family generations in charge of companies (Bammens et al., 2008 and Barontini and Caprio, 2006). Given these limitations in theoretical knowledge, it is important to note that, as companies evolve, different forms of corporate governance may be needed (Filatotchev & Wright, 2005). As Zahra and Pearce (1989) first noted, board composition is contingent upon the current phase in a company's life cycle, so that, in the particular case of a FB, the family generation in charge of the business will be a relevant variable because it determines a FB's need for supervision (Astrachan et al., 2002, Bammens et al., 2008, Gersick et al., 1997 and Voordeckers et al., 2007). The nature of FB governance changes as ownership is dispersed over time and across generations because needs for supervision change, as does the generation in charge of the firm (Alderfer, 1988, Aronoff and Ward, 1995, Astrachan et al., 2002, Bammens et al., 2008, Habbershon and Williams, 1999, Lubatkin et al., 2005 and Voordeckers et al., 2007). A well-formed board can provide a FB with the edge needed to sustain value from one generation to the next. Considering these prospective connections, the aim of this study is to determine whether there are significant differences in the relationship between a board of directors and firm performance that depend on the generational stage of the FB and, more specifically, on founder involvement in the business. In addition, we examine the extent to which the observed relationships are consistent with general good governance recommendations for listed companies. To explore these questions, we use a sample of European, publicly traded, family firms during the 2001–2007 period and compare those FBs led by their founders (FLFBs) with those not led by their founders but by descendants (NFLFBs). The European business sector enables us to analyse the impact of corporate governance on firm performance in a context characterised by high ownership concentration and the presence of family groups that remain in control of a significant number of firms, in contrast to the less amenable American and Anglo-Saxon markets. The role of the founder in FBs is relatively underexplored in the corporate governance literature. By exploring the impact of the founder in the relationship between several board characteristics and firm performance, we attempt to expand the knowledge about corporate governance and to shed further light on differences in FBs over generations. The concerns of this study are particularly pertinent for FB owners, their advisors and regulatory bodies of corporate governance, as well as the scientific community in general. The results presented provide an overview of the relationship between a board and the performance of a FB dependent on whether it is led by its founder. The study provides insight into the proper understanding and design of the structures most suitable for boards of directors in order to maximise firm performance. To pursue our objectives, this article will proceed as follows: in the next section, we adopt an agency theory approach in order to review the monitoring role of boards of directors in the context of FBs, focusing on the influence of founder involvement on agency problems. Hypotheses are subsequently offered. In the third section, we define the sample, variables and methodology used. The results, implications, main conclusions and limitations of the study are discussed in the final sections.